Home | | English 11th std | The Portrait of a Lady: Vocabulary

The Portrait of a Lady: Vocabulary

a) Read the following words and choose the correct antonyms from the options given:

b. Fill in the blanks choosing the appropriate compound words from those given in the box:

Reeta hurried along the road, dressed in her spotless new dress towards the bus stop. Before sunset, she had to reach the house of her grandmother. But the first half-hour of her travel was slow due to traffic jam. Her homecoming would be regarded with joy. She was overstraining herself to reach the place. When she finally stepped into the courtyard, she was received with a big hug by her kind aunt. She was in time to join the gentlefolk at the village, for a singsong.

c. Match the words in Column A with their pairs in Column B to form compound words and write them in Column C 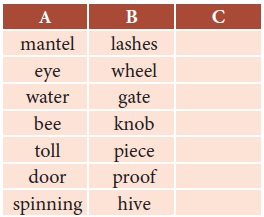 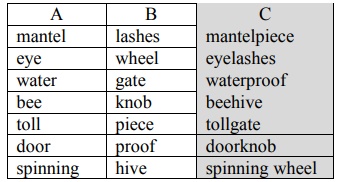 d) Frame meaningful sentences of your own using the following expressions from the story. Use a dictionary if required.

My brother’s thought of selling our ancestral house is almost revolting to me.

Prema is an expanse of pure white serenity.

My friendship with Latha is a turning point in my life.

My parents proposed to me to study medicine, though I did not like it. But I accepted their seclusion with resignation.

I got frivolous rebukes often from my father.

“Her silver locks were scattered untidily over her pale, puckered face, and her lips constantly moved in inaudible prayer.”

In the above sentence, the word ‘inaudible’ is formed by adding the prefix in- to the root/base word ‘audible’.

A prefix is a letter or a group of letters which is added to the beginning of a root word in order to modify it. Usually, the new word formed is the opposite of the given word.

A suffix is a letter or a group of letters added to the end of a root word. By adding suffixes, the grammatical function of the word changes.

Words that are derived or formed from the base word by adding prefixes and suffixes are called derivatives.

Form two derivatives from each of the following words.

Fill in the blanks with suitable homophones:

a. We have a short break between the sessions.

b. The car skidded to a halt when I applied the brake.

b. We should never misuse or waste natural resources.

a. Oxygen is the principal element present in the earth’s crust.

b. Both these machines work on the same principle.

a. Turtles should be bred in a healthy environment.

b. I like to have toasted bread for breakfast.

a. This medicine will lessen your pain.

a. The child looks very sick and pale.

b. I need a pail of water to wash these cups.

a. Ravi  picked  the  banana  peel  and threw it in the dustbin.

b. The soldiers had to pass through a dark tunnel.

a. The corpse was covered with a shroud.

b. A five-day annual training camp for the senior cadets of the National Cadet corps has been organised.