The Portrait of a Lady: Grammar

Determiners are words placed in front of a noun to clarify what the noun refers to.

Look at this sentence.

Here the word ‘this’ refers to a particular noun – ‘laughter therapy’. 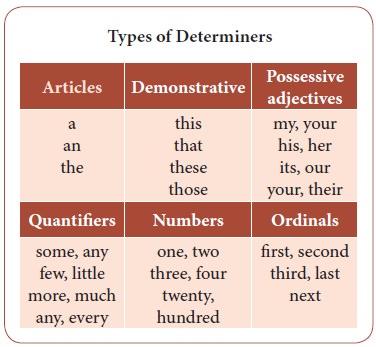 a. Read the paragraph below and fill in the blanks using ‘a, an’, or ‘the’.

It is said that 1 a computer is 2 an electronic extension of the human brain. Therefore, in principle, 3 the computer can do all those activities which 4 the human brain can do. Today computers are found to be 5 the most useful devices as knowledge providers. Another important field of application of computers is 6 the development of robots. 7 The internet has brought 8 a drastic change in communication systems.

b. In the following paragraph, insert ‘a, an’, or ‘the’ wherever necessary and rewrite the sentences.

In our family, we have planned to take children to the zoo next Sunday. A Van has been arranged and we are sure to have a comfortable journey. Zoo is an interesting place for children who enjoy watching the animals and want to know more about them. Even the youngsters love to visit the zoo.

c. Fill in the blanks with appropriate determiners. (Articles have been included)

Once the emperor gave a bag of seeds to his council of ministers and said that he would give them six months’ time to grow the seeds. Whoever does a good job will be made the next emperor of that empire. Most the ministers took their task seriously. After six months Some ministers had small plants in their pots. A few had very large plants. Some had medium sized plants. The emperor entered the hall. He was much amused to see the plants. He called the first minister and asked him what he did with the seed. That minister explained the process he adopted to make the plant grow. The emperor called the the other ministers to explain what they did. Only one minister had come with an empty pot. They laughed loudly at the foolishness of this minister. But the Emperor applauded him and made him the next Emperor. Do you know why? He had given them boiled seeds which will not grow. Only that minister was honest.

d. Fill in the blanks with appropriate determiners.

i. They came early but there was little (little/ a little) work to do.

ii. Anand invited a few (few/ a few) friends for the birthday party.

iii. The teacher gave every (all / every) student a separate topic for the assignment.

iv. Most of (Most of/Many) the water overflowed from the tank.

v. Each one of my friends (friend/ friends) wished me on my birthday.

vi. Vijay had no (no/ any) idea about the problem.

vii. Adhi had taken many (much /many) photos during the programme.

viii. Some (Some/Few) girls who attended the class informed the others about the test.

Tenses of verbs are used to express time. They indicate the time and state of the action.

The following pictographs will help you understand the tense forms better. 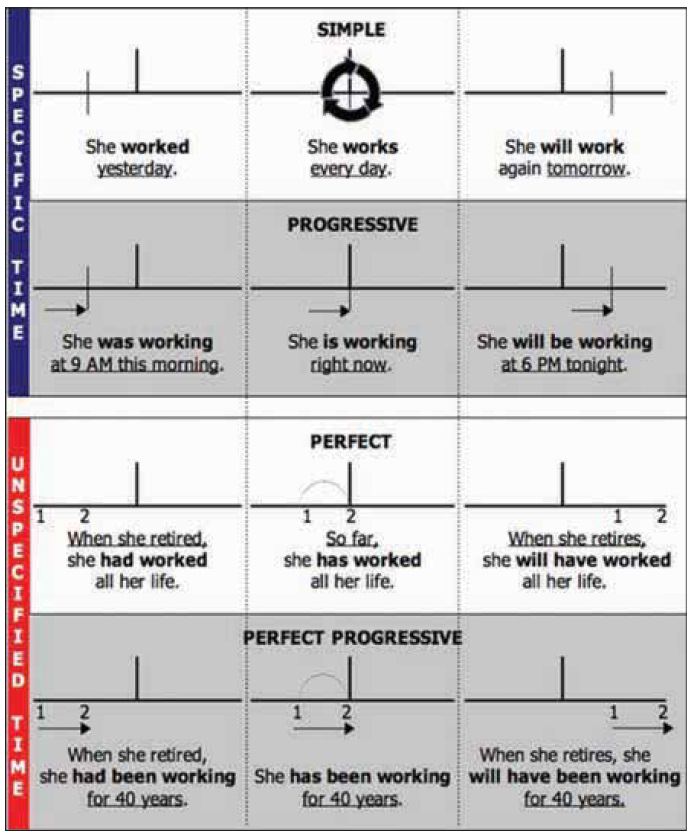 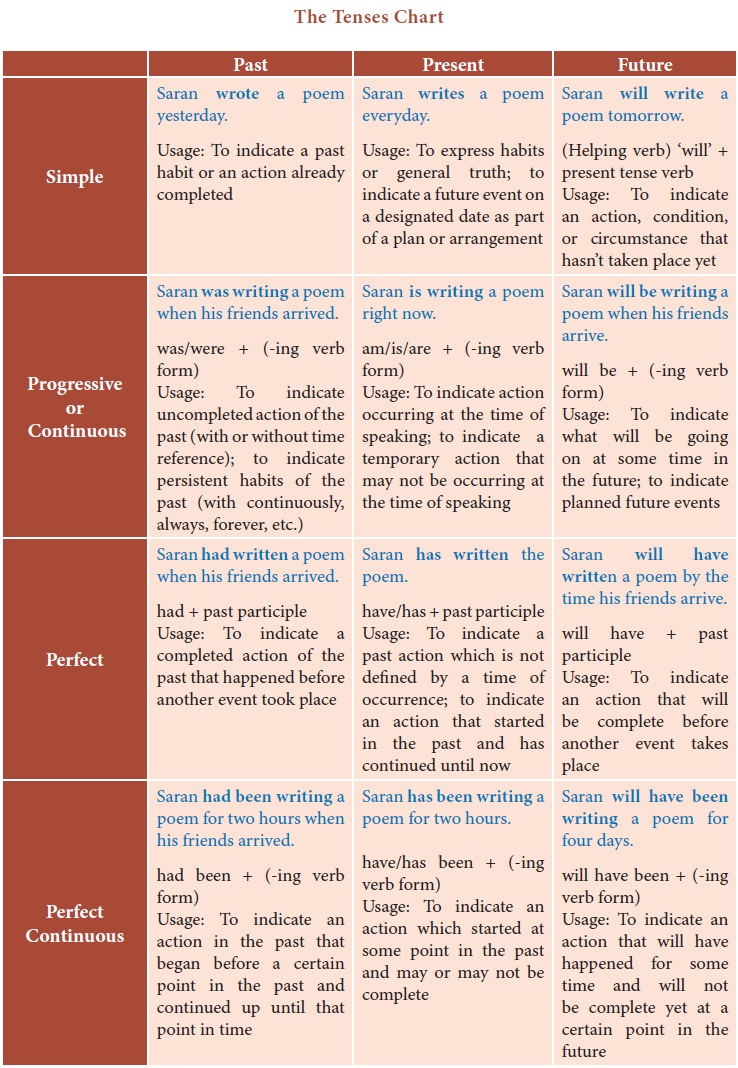 a. Fill in the blanks with the correct form of the verbs in brackets and read the completed passage aloud.

The people of India, as a whole, 1 are (be) warm-hearted and hospitable. Any calamity in any part of the world immediately 2 arouses (arise) their charity and generosity and a committee 3 is (be) promptly 4 set (set ) up to collect funds to help the distressed. The most endearing quality in them 5 is (be) the respect they show for the work done in any capacity. They 6 believe (believe) in what we 7 Call (call) the dignity of labour.

b. Now, use the verbs given in brackets in the following sentences in their correct forms.

5.        We hear (hear) a lot of noise because the new buildings transmit (transmit) sound vacant.

7.        The Prime Minister will leave (leave) for America to meet the delegates tomorrow.

c. You are a commentator for a 5000 metre running race. Use simple present and present continuous tenses and complete the commentary from the beginning to the end of the race. Read the completed passage aloud.

The 5000 metre race is about to begin. Lined up at the starting point, from left to right, are John of Great Britain, Peter of Nigeria and Jeeva of India. The runners are warming up for the great event. Now they 1 are taking (take) their positions on the track. They 2 are (be) all ready for the start. There 3 goes (go) the starter’s gun! Yes, the race has begun. John 4 is leading (lead) with Jeeva 5 closing / close (close) behind him.

d. Read the extract from Kayal’s diary entry regarding her Nepal Trek, and fill in the blanks with the correct tense form of the verbs given in brackets.

DAY 1 We left (leave) Anna International Airport in Chennai two days ago catching a direct flight to Kathmandu in Nepal. We spent (spend) a day sightseeing. Kathmandu is full of people, rickshaws and the smell of sandalwood. I’ve never been (be) on a trip like this before. So I’m really excited.

DAY 2 It was raining (rain) when we reached Pokhara, Nepal’s second largest city, and saw the snowy peaks of the Himalayas for the first time. We reached (reach) Pokhara after a hair-raising six-hour bus journey along very narrow roads with a lot of hairpin bends. The bus was (be) so full that one person had to share the driver’s seat.

DAY 3 We began (begin) our trek at last. We are at about 900 metres and the weather is warm and humid. For lunch we had chips and yak cheese sandwiches. I didn’t like them very much. I’m thrilled that we pitched (pitch) tents for our camps in the dense forests.

DAY 4 Yesterday a landslide blocked (block) our path and we had to use ropes to get over it. This morning we walked along the river Kali Gandaki through dense forests of oak trees and we pitched our camp at Tukuche below the Annapurna mountain range. The main danger in addition to landslides, is ‘yak attack’. Yaks are (be) not dangerous but you have to be careful if you meet a herd of them because they can push you off the sides of the mountain.

DAY 5 We met a lot of children on our trek through the villages. They were playing (play) in the pool of muddy rain water as we left the place. We have already climbed 2,400 metres. Up here, it never rains (rain) and there are no trees. It is (be) windy and dusty and I am always thirsty.

DAY 6 Yesterday we went (go) up to the mountainside of the township of Mukthinath, at 3,600 metres. The thin air with less oxygen there left (leave) us breathless.We felt (feel) that we couldn’t go any further. We drank (drink) a lot of extra fluids to prevent altitude sickness.

DAY 7 We turned around today and started to descend to Jomosom. As we went down, the oxygen filled our blood again and we seemed to fly (fly) instead of walking.

DAY 8 We went back to Pokhara in a small plane yesterday. It was exciting (excite) when we flew between the mountain peaks. We arrived in Kathmandu this afternoon and we spent (spend) our last few hours in shopping. We leave for Chennai tomorrow. We’ve had a trip of a lifetime.

i) Unless one is upright there is no use in being a charming fellow. Sometimes it is better to be honest than attractive. These are the great truths of modern life which Shyam never realised. He never said an ill-natured word in his life. He was always polite and spoke softly to everybody.

ii) That night he strolled into the Palette Club about eleven o’clock, and found Trevor sitting by himself in the long room. “Well, Alan, did you get the picture finished all right? ” he said, as he lit his cigarette. “Finished and framed, my boy!” answered Trevor, “and by-the-bye, you have made a conquest. That old model you saw is quite devoted to you. I had to tell him all about you — who you are, where you live, what your income is, what prospects you have.”

iii) "And now tell me how Laura is. The old model was quite interested in her." "You don’t mean to say you talked to him about her?" said Hughie. "Certainly I did. He knows all about the relentless colonel, the lovely Laura, and the £10,000." "You told that old beggar all my private affairs?" cried Hughie, looking very red and angry. "My dear Alan," cried Hughie, "I shall probably find him waiting for me when I go home."

f. Fill in the blanks using Past tense forms of the verbs:

ii.          We were not able to stay overnight as we had not reserved (reserve) the tickets in advance.

v.               Yusuf understood the problem because he had experienced (experience) the situation earlier.

ix.             Edith had visited (visit) several doctors before she found out what the problem was with her knee.

Chasing a huge target of 308 runs, India romped home in the penultimate over of the match to defeat Pakistan and win the Blind Cricket World Cup. India started off their chase in a cracking manner, but had lost two quick wickets. Sunil Ramesh rose to the occasion as he played a great knock to help India beat Pakistan and had scored 93 runs. Earlier India won the toss and had decided to bowl first. Pakistan amassed a huge score of 307 for eight in 40 overs. Their openers had given them a brisk start which the later batsmen capitalized on.

h. Read the following extract and fill in the spaces with the right form of verbs and complete the passage. The first one is done for you.

(i) The poet stops to hear the maiden singing while she 1 was cutting (cut) and 2 binding (bind) the grain. The song of the lady 3 fascinated (fascinate) the poet, who 4 stood (stand) there to listen to the song. The girl sang (sing) a sad song.

(ii) During the monsoon, a tender slightly warm breeze 1 was blowing (blow) on a cloudless afternoon. A sort of fragrance 2 rose (rise) from the wet grass and trees in the sunlight. It 3 seemed (seem) as if the warm breath of the exhausted earth 4 was falling (fall) against one’s skin. A sweet voiced bird somewhere 5 was chirping (chirp) repeatedly.

i. Read the news item that appeared in a daily and fill in the blanks with suitable forms of the verbs given in brackets.

Ever since social networking sites entered our lives, they 1 have served (serve) as platforms where users could use the virtual space offered by these social media. However, recent incidents 2 have caused (cause) many to question the freedom to express views on various issues and in some cases, it 3 has become (become) a dangerous platform. Social Contact 4 has transformed (transform) people. They 5 have developed (develop) an addiction to it.

j. Read the following passage and correct the errors you come across.

1. Rajan slowly settle settled down in his retired life. His pension plus what his wife bring brought from the household work does helped had helped helped them to meet their requirements. Life is easy until one Sunday. His granddaughter Madhu come came crying. The clay doll in her hand had broken into two. Rajan pacify pacified her and promise promised to mend it. This small repair work become became the founding stone of a very prosperous venture into making clay dolls which earn earned him great respect.

2. Games and sports helps help in recreation. Soccer, cricket, lawn tennis or wrestling is are eagerly watched by millions of fans all over a the world. It helps one got get  got a temporary relief from the tensions of a day. The dedication displayed by all player all the players in the field  indicates indicate the mental and spiritual development of the  player players.