The Major operations of sheet Metal

The Major operations of sheet Metal are;

The mechanical cutting of materials without the information of chips or the use of Burning or melting for straight cutting blades: shearing for curved blades: blanking, piercing, notching, trimming

Cutting a piece from the sheet metal by leaving enough scrap around the opening to assure that the punch has enough metal to cut along its entire edge, during which a metal work piece is removed from the primary metal strip or sheet when it is punched.

It is the operation to produce circular holes on a sheet metal by a punch and a die. Here the pierced metal is the final product then the operation is called as punching.

It is an operation to produce holes of any desired shape. Piercing produces a raised hole rather than a cut hole. Piercing refers to punching a hole.

It is the operation of cutting and removing unwanted excess metal from the periphery of a previously formed /forged/cast component.

Shearing process used to cut rolls of sheet metal into several rolls of narrower width used to cut a wide coil of metal into a number of narrower coils as the main coil is moved through the slitter. Shearing operations can be carried by means of a pair of circular blades.

Same as piercing- edge of the strip or black forms part of the punch-out perimeter. In this process the metal is removed from the side (OR) EDGE of a sheet to get the desired shape.

Produces a series of overlapping slits/notches. A machine called nibbler moves a small straight punch up and down rapidly into a die.

Finishing operation in which a small amount of metal is sheared away from the edge of an already blanked part .can be used to produce a smoother edge. The rough edges of a blanked part are removed by cutting thin strip of metal along the edge on the periphery.

Used to blank shapes from low-strength materials such as rubber, fiber and cloth

Process of making multiple holes which are small in diameter and closed together.

In this operation a piece is removed from a strip by cutting along a single line.Parting The sheet is sheared into two (Or) more pieces.

The elastic recovery of the material after unloading of the tools. 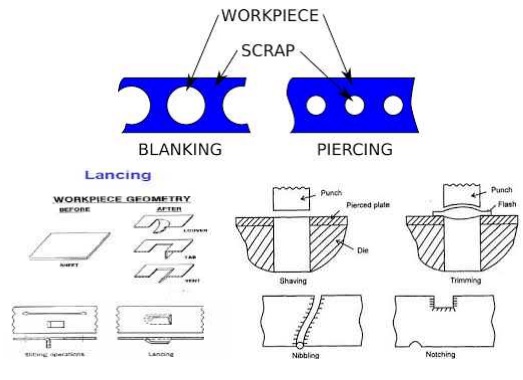 The plastic deformation of metals about a linear axis with little or no change in the surface area. The purpose of bending is to form sheet metal along a straight line