In this process te pressure over the rubber membraneis controlled throughout the forming cycle, with maximum pressure upto- 100 Mpa.This procedure allows close control of the part during forming, to prevent wrinkling (or) tearing. This process is called hydroform or fluif – Forming Process.Hydro forming is a Drawing process.

1.It is used for Mass production.

2.Tools can be quickly changed.

3.Complicted shapes , sharp corners can be made by this method.

4.Spring back, Thining off metals are removed.

One of the die material is made up of a flexible material (ex. Rubber) Or (poly-urethane material.In bending and embossing of sheet metal , the female die is replaced with a rubber pad.Pressure in the rubber pad forming is usually in the order of10Mpa.

The blank is placed under the punch called male die.Then the ram (femal part) is moved so that punch touches the top surface of the work. Then the force is appled and gradually. increased on the blank through the rubber pad.

The blank  holder ring is used to distribute uniform pressure throughout the blank.

Thus the required shape is formed on the sheet metal between male and female parts.

1.Number of shapes can be formed on one rubber pad.

2.Thining in metal balank does not take place.\

3.setting time of the tool is less.

1.Rapid wearing of rubber Pads is a problem in this process. 2.Accurate sharp corners cannot be made by this process.

3.Loss of pressure between hydraulic fluid and rubber pad which is a major problem

Unsymmetrical shaped components can be made.

This process is used to produce curvature on thin sheet metals by shot peening on surface of the sheet. A stream of metal shots is blasted against the surface of the blank.

This process is also called as peen forming technique. 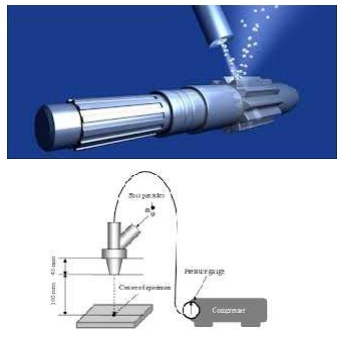 Peening is done with cast- iron (or) Steel shot discharged either from a rotating wheel by an air blast made from a nozzle.

Complex shapes can be easily produced . Die and Punch is not used.

Peening is used as a salvage operations for distorted parts (OR)  correcting part.

This process requires longer time for forming the required shape.

Honey comb panels like aircraft wings and large tubular shapes can be produced.