The Legend of Jaswantgarh: Questions with Answers

A. Answer the following questions.

Jaswantgarh is located in Arunachal Pradesh.

2. Which place was the last stand of the Indian army?

Nauranang was the last stand of the Indian army.

3. When did the battle of Nauranang start? How long did it continue?

The battle of Nauranang started on 17th November 1962. It lasted for 72 hours.

4. Who helped Jaswant in the battle against Chinese?

Two village girls names Sela and Nura helped Jaswant in the battle against the Chinese.

5. What happened to the two girls at the end of the war?

Sela was killed in a grenade blast. Nura was captured alive by the Chinese.

6. How was he honoured by the Indian government?

India awarded Jaswant the Mahavir Chakra. A war memorial was made with the brass bust to remember his service to the nation.

B. Fill in the blanks.

1. Jaswantgarh is named after the Indian soldier Jaswant Singh Rawat.

1. Nauranang is in Himachal Pradesh. (False)

5. According to the Indian army, Jaswant is still serving. (True)

D. Rearrange the story in order.

3.  He fired weapons from seperate points.

4.  Sela and Nura helped him in the battle.

5.  Jaswant shot himself to death.

7.  He was awarded the Mahavir Chakra.

2.  Sela and Nura helped him in the battle.

3.  He fired weapons from seperate points.

6.  Jaswant shot himself to death.

7.  He was awarded the Mahavir Chakra. 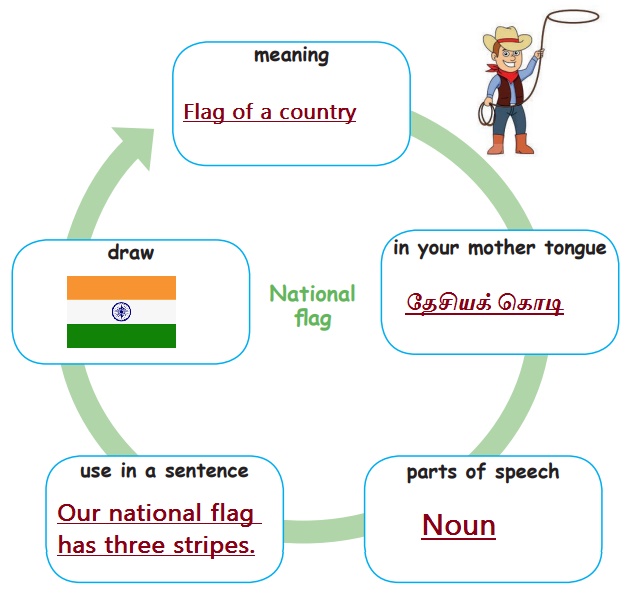 Flag of a country (தேசியக் கொடி) : Our national flag has three stripes.

Collect more information about Jaswant Singh and the incidents and speak it in front of your class.

I am going to speak about

Jaswant Singh Rawat, MVC (19 August 1941 – 17 November 1962) was an Indian Army soldier serving in the Garhwal Rifles who was awarded the prestigious Maha Vir Chakra posthumously as a result of his actions during the battle of Nuranang in present-day Arunachal Pradesh, India, during the Sino-Indian War.

A.  Read the passage and colour one flag each time you read.

Our national emblem is taken from Ashoka’s pillar at Sarnath. It is found on all government documents, coins, currency notes, postcards and envelopes. It consists of four lions standing back to back but, we can see only three lions at a time. There is a Dharma chakra in the centre of the base plate, with the figure of a bull in the right and that of a horse in the left. The entire structure is sitting on a lotus. The words ‘Sathyameva Jayate’ are written under it in Devanagari script. These words mean, ‘Truth alone Triumphs’.

B. Choose the picture for the passage.

1.  Where is our national emblem taken from?

Our national emblem is taken from Ashoka's pillar at Sarnath.

2.  Where is our national emblem found?

It is found on all government documents, coins, currency notes, postcards and envelopes.

3.  What does ‘Sathyameva Jayate’ mean?

4. What are the animals found in the emblem?

A bull and a horse are found in the emblem.

Write the hungry fox story on your own by looking at the pictures and using the clues given under each picture. 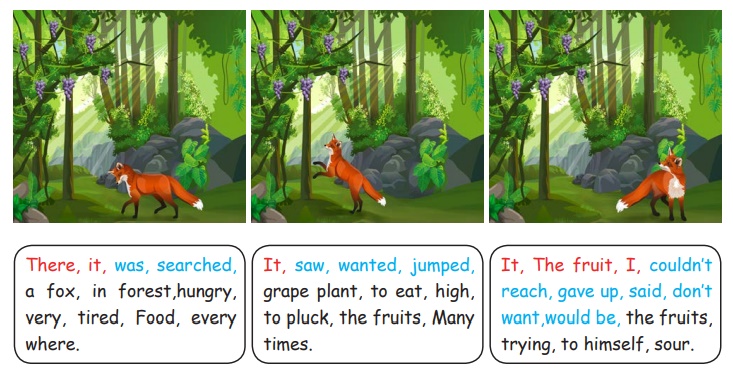 There, it, was, searched, a fox, in forest, hungry, very, tired, Food, every where.

It, saw, wanted, jumped, grape plant, to eat, high, to pluck, the fruits, Many times.

It, The fruit, I, couldn’t reach, gave up, said, don’t want, would be, the fruits, trying, to himself, sour.

1. There was a fox in the forest. It was very hungry. It searched for food everywhere. It became tired.

2. It saw a grape plant. He wanted to eat fruits. But they were very high. The fox tried to pluck the fruits. He jumped at the fruits many times.

3. It could not reach the fruits. So it gave up trying. He said to himself "The fruits are sour. I don't want them".

A.  Look at the picture and answer the following. 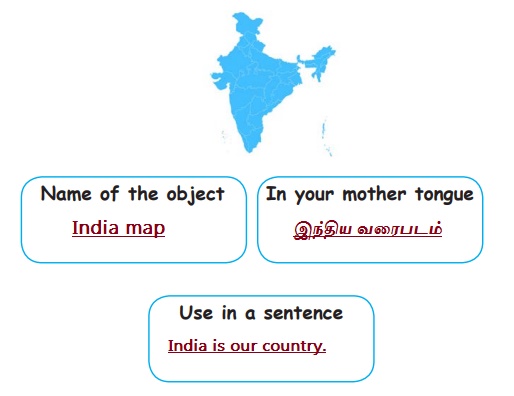 B. Divide the following words.

C. List out the words under each group and divide them.

2. In summer, we have more holidays.

3. We celebrate Independence day on 15th August, every year.

4. He walks usually in the morning. 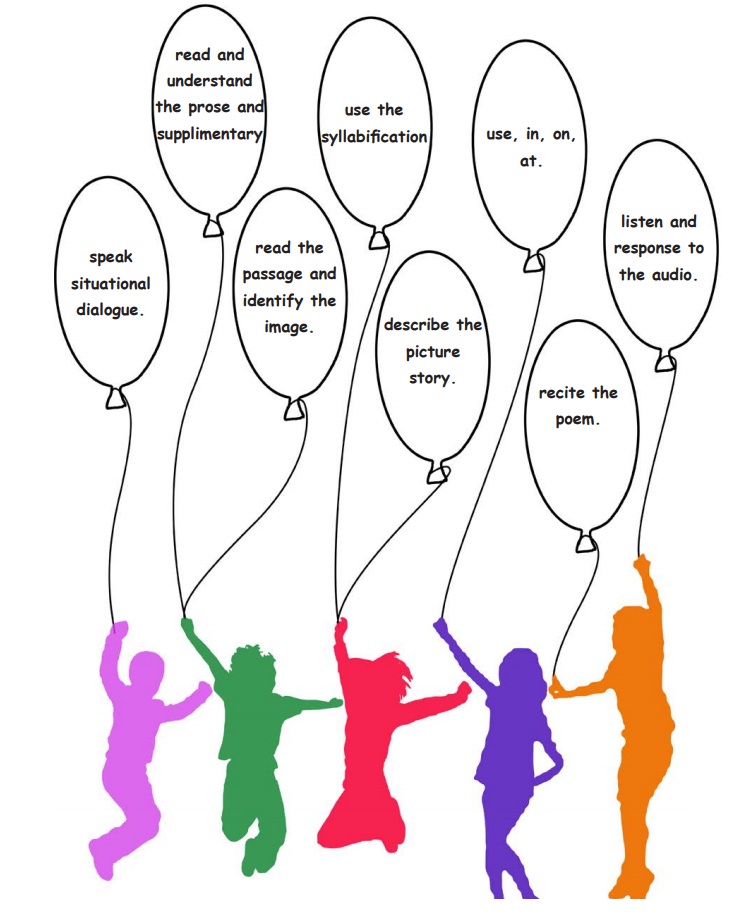