Learning Objectives • To trace the origin of the later Cholas and the later Pandyas • To know about the prominent rulers of both the kingdoms • To acquaint with their administrative system • To understand the social, economic and cultural development during their reign

• To know about the prominent rulers of both the kingdoms

• To acquaint with their administrative system

• To understand the social, economic and cultural development during their reign

The Cholas are one among the popular and well-known Tamil monarchs in the history of South India. The elaborate state structure, the extensive irrigation network, the vast number of temples they built, their great contributions to art and architecture and their overseas exploits have given them a pre-eminent position in history.

Revival of the Chola Rule

The ancient Chola kingdom reigned supreme with the Kaveri delta forming the core area of its rule and with Uraiyur (present-day Tiruchirappalli) as its capital. It rose to prominence during the reign of Karikala but gradually declined under his successors. In the 9th century Vijayalaya, ruling over a small territory lying north of the Kaveri, revived the Chola Dynasty. He conquered Thanjavur and made it his capital. Later Rajendra I and his successors ruled the empire from Gangaikonda Cholapuram, the newly built capital.

Rajaraja I (A.D. (CE) 985 - 1016) was the most powerful ruler of Chola empire and also grew popular beyond his times. He established Chola authority over large parts of South India. His much-acclaimed naval expeditions led to the expansion of Cholas into the West Coast and Sri Lanka. He built the famous Rajarajeswaram (Brihadeshwara) Temple in Thanjavur. His son and successor, Rajendra Chola I (A.D. (CE) 1016 - 1044, matched his father in his ability to expand the empire. The Chola empire remained a powerful force in South India during his reign. After his accession in A.D. (CE) 1023, his striking military expedition was to northern India, capturing much territory there. He proclaimed himself the Gangaikondan (conqueror of the Gangai region). The Gangaikonda Cholapuram temple was built to commemorate his victories in North India. The navy of Rajendra Chola enabled him to conquer the kingdom of Srivijaya (southern Sumatra). Cholas’ control over the seas facilitated a flourishing overseas trade.

Decline of the Chola Empire

Rajendra Chola’s three successors were not capable rulers. The third successor Veerarajendra’s son Athirajendra was killed in civil unrest. With his death ended the Vijayalaya line of Chola rule. 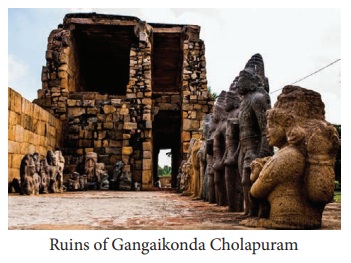 Matrimonial alliances between the Cholas and the Eastern Chalukyas began during the reign of Rajaraja I. His daughter Kundavai was married to Chalukya prince Vimaladitya. Their son was Rajaraja Narendra who married the daughter of Rajendra Chola named Ammangadevi. Their son was Kulothunga I.

On hearing the death of Athirajendra, the Eastern Chalukya prince Rajendra Chalukya seized the Chola throne and began the rule of Chalukya-Chola dynasty as Kulothunga I. Kulothunga established himself firmly on the Chola throne soon eliminating all the threats to the Chola Empire. He avoided unnecessary wars and earned the goodwill of his subjects. But Kulothunga lost the territories in Ceylon. The Pandya territory also began to slip out of Chola control. Kanchipuram was lost to the Telugu Cholas. The year 1279 marks the end of Chola dynasty when King Maravarman Kulasekara Pandyan I defeated the last king Rajendra Chola III and established the rule of the Pandyas in present-day Tamil Nadu.

The central administration was in the hands of king. As the head of the state, the king enjoyed enormous powers. The king’s orders were written down in palm leaves by his officials or inscribed on the temple walls. The kingship was hereditary in nature. The ruler selected his eldest son as the heir apparent. He was known as Yuvaraja. The Yuvarajas were appointed as Governors in the provinces mainly for administrative training.

The Chola rulers established a well-organised system of administration. The empire, for administrative convenience, was divided into provinces or mandalams. Each mandalam was sub-divided into naadus. Within each naadu, there were many kurrams (groups of villages). The lowest unit was the gramam (village).

Local administration worked through various bodies such as Urar, Sabhaiyar, Nagarattar and Nattar. With the expansion of agriculture, numerous peasant settlements came up on the countryside. They were known as Ur. The Urar, who were landholders acted as spokesmen in the Ur. Sabhaiyar in Brahman villages also functioned in carrying out administrative, financial and judicial functions. Nagarattar administered the settlement of traders. However, skilled artisans like masons, blacksmiths, goldsmiths, weavers and potters also lived in Nagaram. Nattar functioned as an assembly of Nadu and decided all the disputes and issues pertaining to Nadu.

The assemblies in Ur, Sabha, Nagaram and Nadu worked through various committees. The committees took care of irrigation, roads, temples, gardens, collection of revenue and conduct of religious festivals. 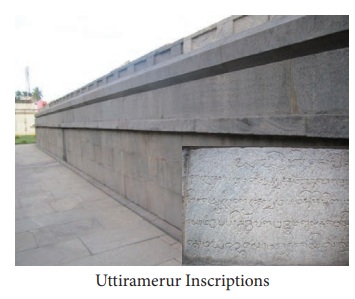 Uttiramerur presently in Kanchipuram district was a Brahmadeya village (land grants given to Brahmins). There is a detailed description of how members were elected to the committees of the village sabha in the inscriptions found there. One member was to be elected from each ward. There were 30 wards in total. The eligibility to contest was to men in the age group of 35–70, well-versed in vedic texts and scriptures, and also owned land and house. The process of election was as follows: The names of qualified candidates from each ward were written on the palm-leaf slips and put into a pot. The eldest of the assembly would engage a boy to pull out one slip and declare his name. Various committees were decided in this way.

The revenue of the Chola state came mainly from the land. The land tax was known as Kanikadan. The Chola rulers carried out an elaborate survey of land in order to fix the government’s share of the land revenue. One-third of produce was collected as land tax. It was collected mostly in kind. In addition to land tax, there were taxes on profession and tolls on trade.

Social Structure Based on Land Relations

The Chola rulers gifted tax-free lands to royal officials, Brahmins, temples (devadana villages) and religious institutions. Land granted to Jain institutions was called pallichchandam. There were also of vellanvagai land and the holders of this land were called Vellalars. Ulu-kudi, a sub-section of Vellalar, could not own land but had to cultivate Brahmadeya and vellanvagai lands. The holders of vellanvagai land retained melvaram (major share in harvest). The ulu-kudi got kil-varam (lower share). Adimai (slaves) and panicey-makkal (labourers) occupied the lowest rung of society. In the intermediate section came the armed men and traders.

Cholas gave importance to irrigation. The 16-mile long embankment built by Rajendra Chola in Gangaikonda Cholapuram is an illustrious example. Vati-vaykkal, a criss-cross channel, is a traditional type of harnessing rain water in the Cauvery delta. Vati is a drainage channel and a vaykkal is the supply channel. The commonly owned village channel was called ur-vaykkal. The nadu level vaykkal is referred to as nadu-vaykkal. The turn-system was in practice in distributing the water.

Chola rulers were ardent Saivites. Hymns, in praise of the deeds of Lord Siva, were composed by the Saiva saints, the Nayanmars. NambiyandarNambi codified them, which came to be known as the Thirumurai.

The Chola period witnessed an extensive construction of temples. The temples in Thanjavur, Gangaikonda Cholapuram and Darasuram are the repository of architecture, sculpture, paintings and iconography of the Chola art. Temples during the Chola period were not merely places of worship. They were the largest landholders. Temples promoted education, and devotional forms of art such as dance, music and drama. The staff of the temples included temple officials, dancing girls, musicians, singers, players of musical instruments and the priests. 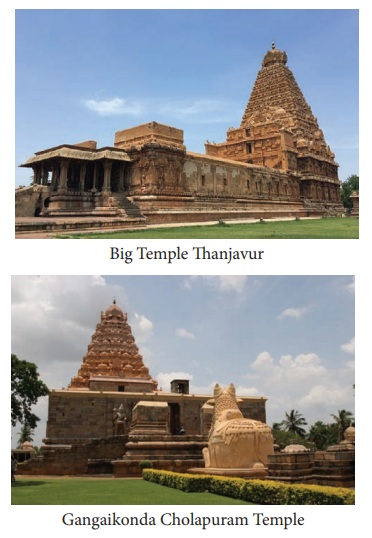 Cholas as Patrons of Learning

Chola kings were great patrons of learning. Rajendra I established a Vedic college at Ennayiram (now in Villupuram District). There were 340 students learning the Vedas, grammar and Upanishads under 14 teachers. This example was later followed by his successors and as a result two more such colleges had been founded, at Tirubuvanai near present-day Puducherry and Tirumukkoodal in present-day Chengalpattu district, in 1048 and 1067 respectively. The great literary works Periyapuranam and Kamba Ramayanam belong to this period.

There was a flourishing trade during the Chola period. Trade was carried out by two guild-like groups: anju-vannattar and mani-gramattar. Anju-vannattar comprised West Asians, Arabs, Jews, Christians and Muslims.

They were maritime traders and settled on the port towns all along the West Coast. It is said that mani-gramattar were the traders engaged in inland trade. In due course, both groups merged under the banner of ai-nutruvar and disai-ayirattu-ai-nutruvar functioning through the head guild in Ayyavole, Karnataka. This ai-nutruvar guild operated the maritime trade covering South-East Asian countries. Through overseas trade with South-East Asian countries elephant tusks, coral, transparent glass, betel nuts, cardamom, opaque glass, cotton stuff with coloured silk threads were imported. The items exported from here were sandalwood, ebony, condiments, precious gems, pepper, oil, paddy, grains and salt.