Pandyas were one of the three ancient Tamil dynasties that ruled southern India since the 4th century B.C. (BCE) but intermittently. Korkai, associated with pearl fisheries, is believed to have been their early capital and port.

Pandyas were one of the three ancient Tamil dynasties that ruled southern India since the 4th century B.C. (BCE) but intermittently. Korkai, associated with pearl fisheries, is believed to have been their early capital and port. They moved to Madurai later, as many early Tamil inscriptions of Pandyas have been unearthed in Madurai and its surroundings. Under the Pandya kings of the Sangam Age, Madurai was a great centre of culture. Poets and writers of Tamil language gathered there and contributed to the development of Tamil Classics. The Pandyas had re-established their strong position in south Tamil Nadu by the end of the 6th century A.D. (CE), after eliminating the rule of Kalabhras. But they could not resist the rising power of the later Cholas who ruled South India from 9th to 13th century. Thereafter taking advantage of the decline of Chola power,t he later Pandyas re-established their authority. Their rule continued until 16th century.

Kadunkon recovered Pandya territory from the Kalabhras towards the close of 6th century. He was succeeded by two others. Arikesari Maravarman was the first strong Pandya ruler who ascended the throne in A.D. (CE) 642. He was a contemporary of Mahendravarman I and Narsimahvarman I. Inscriptions and copper plates praise his victory over his counterparts: Cheras, Cholas, Pallavas and Sinhalese. Arikesari Maravarman is identified with the Kun Pandian, the persecutor of Jains.

Saivite saint Thirugnanasambandar converted Arikesari from Jainism to Saivism. On his conversion, Arikesari is alleged to have impaled around 8000 Jains on stakes. Though the number is an exaggerated one, the anti-Jain attitude of Arikesari after his conversion to Saivism cannot be doubted.

After Arikesari, the greatest of the dynasty was Jatila Parantaka Nedunjadayan (Varaguna I) (756-815), the donor of the Velvikkudi plates. Nedunjadayan expanded the Pandya territory to include Thanjavur, Tiruchirappalli, Salem and Coimbatore districts. Nedunjadayan’s successors Srimara Srivallabha and Varaguna II, were successively defeated by Pallavas. Later they could not face the rising Chola dynasty under Parantaka I. Parantaka I defeated the Pandya king Rajasimha II who fled the country in 920. Thus ended the Pandya rule revived by Kadungon.

The Chola viceroyalty became weak in Pandya country after the death of Adhirajendra (the last king of Vijayalaya line). Eventually the Pandya kingdom could emerge as the only leading Tamil dynasty in the 13th century. Madurai continued to be their capital. Now Kayal was their great port. Marco Polo, a famous traveller from Venice, visited Kayal twice, in 1288 and 1293. He tells us that this port town was full of ships from Arabia and China and bustling with business activities.

Marco Polo hailed the Pandyan Kingdom as ‘the richest and the most splendid province in the world’. Together with Ceylon, he added, it ‘produced most of the gems and pearls that are found in the world’. In his travel account he recorded the incidents of sati and the polygamy practiced by the kings.

The illustrious ruler of the second Pandya Kingdom was Sadaiyavarman (Jatavarman) Sundarapandyan (1251 to 1268). He brought the entire Tamil Nadu under his rule, which extended up to Nellore in Andhra. He held the Hoysalas in check. The Chera ruler, the chief of Malanadu, accepted his feudatory position and paid tribute to Sundarapandyan. Emboldened by the decline of the Chola state, the Boja King of Malwa region Vira Someswara challenged Sundarapandyan. In a war at Kannanur, Sundarapandyan defeated Someswara. Sundarapandyan succeeded in establishing his authority over the chieftains of Cuddalore,

Kanchipuram in northern Tamil Nadu, Arcot and Salem in the western region. 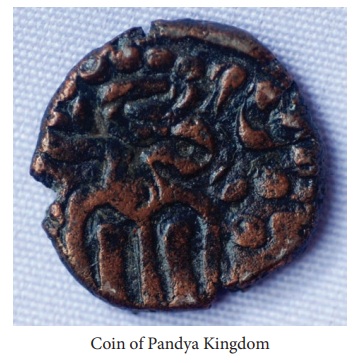 There were two or three co-regents who ruled simultaneously along with Sundarapandyan: VikramaPandyan and ViraPandyan. After Sundarapandyan, Maravarman Kulasekaran ruled successfully for a period of 40 years , giving the country peace and prosperity. He had two sons. The king’s appointment of ViraPandyan as a co-regent provoked the other son Sundara Pandyan who killed his father Maravarman Kulasekaran. In the civil war that ensued, ViraPandyan won and became firmly established in his kingdom. The defeated SundaraPandyan fled to Delhi and took refuge under the protection of Ala-ud-din Khalji. This provided the opening for the invasion of Malik Kafur.

After Malik Kafur’s invasion, the Pandyan Kingdom came to be divided among a number of kings from the main ruling Pandya’s family. In Madurai, a Muslim State subordinate to the Delhi Sultan came to be established.

Pandya kings preferred Madurai as their capital. Madurai has been popularly venerated as Koodal. The kings are traditionally revered as Koodal-kon, Koodal Nagar Kavalan. The Pandyas derived military advantage over their neighbours by means of their horses. They imported these horses through Arabs with whom they had commercial and cultural contact.

The king claimed that he was ruling according to Manu Sastra. This doctrine supported the social hierarchy in the society. Kings and local chiefs created Brahmin settlements called Mangalam or Chatur-vedi-mangalam with irrigation facilities. The actual landowning groups are described as the Bumiputtirar, otherwise called the vellalar. Historically they were locals and hence they were referred to as nattu-makkal. The communal assembly of this group is Cittira Meli Periyanattar.

Pandy nadu, as in Chola state, consisted of many provinces known as vala-nadus, which, in turn, were divided into many nadus and kurrams. The administrative authorities of nadus were the nattars. Nadu and Kurram contained settlements, viz. mangalam, nagaram, ur and kudi, where different social groups inhabited.

An inscription from Manur (Tirunelveli district) dated A.D. (CE) 800 provides an account of village administration. It looks similar to Chola’s local governance that included village assemblies and committees. Both civil and military powers seem to have been vested in the same person.

The Pandya rulers created a number of irrigation sources. On either side of the rivers Vaigai and Tamiraparani, channels leading to the irrigation tanks were built. In southern Tamilnadu, like the Cholas, Pandyas introduced the new irrigation technology. Irrigation works were done by local administrative bodies, local chiefs and officials. Repairs were mostly undertaken by local bodies. Sometimes, traders also dug out tanks for irrigation.

Pandyas extended patronage to vedic practices. Velvikkudi copper plates as well as inscriptional sources mention the rituals like Asvameda yaga, Hiranya garbha and Vajapeya yaga, conducted by every great Pandya king. The impartiality of rulers towards both Saivism and Vaishnavism is also made known in the invocatory portions of the inscriptions. Temples of both sects were patronised through land grant, tax-exemption and renovation.

The great Saiva and Vaishnava saints (Nayanmaras and Alwars) combined contributed to the growth of Tamil literature and spiritual enlightenment. The period was marked by intense religious conflict. The Bhakti movement of the time prompted the heterodox scholars for a debate. Many instances of the defeat of Buddhists and Jains in such debates are mentioned in Bhakti literature. The Pandya kings of the period supported and promoted Tamil and Sanskrit.

Medieval Pandyas and later Pandyas did not build any new temples but maintained the existing temples, enlarging them with the addition of gopuras, and mandapas. The monolithic mega size ornamented pillars are the unique feature of the medieval Pandya style. The sculptures of Siva, Vishnu, Kotravai, Ganesa and Subramanyar are the best specimens in these temples. Pandyas specially patronised the historic Meenakshi temple at Madurai and kept expanding its premises by adding gopuras and mandapas. 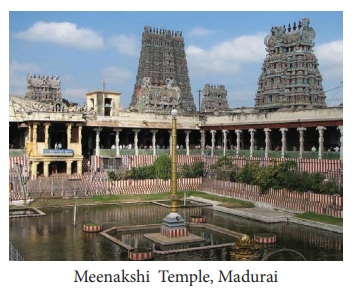 Arab settlements on the west coast of southern India, from 7th century, had led to the expansion of their trade connection to the east coast because the governments of the east coast pursued a more liberal and enlightened policy towards overseas traders. Their charters exempted traders from various types of port dues and tolls. In Kayal, there was an agency established by an Arab chieftain by name Malik-ul-Islam Jamal-ud-din. This agency facilitated availability of horses to Pandya kings.

In 13th and 14th centuries, horse trade became brisk. Marco Polo and Wassaff state that the kings invested in horses as there was a need of horse for ceremonial purposes as well as for fighting wars. Those who were trading in horses were called kudirai chetties. They were active in maritime trade also. The busiest port town under the Pandyas was Kayal Pattinam (now in Thoothukudi district) on the east coast. Gold coins were in circulation as the trade was carried through the medium of gold. It was variously called kasu, kalanchu and pon.

The vast trade in horses of that time has been recorded by Wassaff. He writes: ‘…as many as 10,000 horses were imported into Kayal and other ports of India of which 1,400 were to be of Jamal-ud-din’s own breed. The average cost of each horse was 220 dinars of “red gold’.

• The Cholas and Pandyas are well known Tamil monarchs.

• The prominent Chola rulers are Rajaraja I and Rajendra I.

• Maritime trade during Pandyas is highlighted by Marco Polo and Wassaff.

2. Embankment: a wall or stone structure built to prevent a river flooding an area as well as to store its water தடுப்பணை

6. Repository: place in which things are stored கருவூலம்