I. Choose the Correct answer

1. Who revived the later Chola dynasty?

2. Who among the following Pandya rulers is known for ending the Kalabhra rule?

3. Which of the following was the lowest unit of Chola administration?

4. Who was the last ruler Vijayalaya line of Chola dyanasty?

6. To which of the following, Marco Polo went in the last decade of 13th century in India?

1. Rajaraja I built the famous Brihadeshwara Temple at Thanjavur.

2. Rajendra I established a Vedic college at Ennayiram.

4. The royal sectretariat of Pandya kingdom was known as eluttu mandapam.

1. A Muslim state subordinate to Delhi Sultan was in Madurai. - True

2. Koodal – nagar Kavalan was the title of a Pandya king. - True

5. The elder son of the Chola king was called Yuvaraja. - True

1. Which of the following statements about Later Cholas are correct?

1.They had a system of Local self government.

2.They maintained a strong navy.

3.They were the followers of Buddhism.

2. Which of the following statements are true with regard to Rajendra Chola?

1. He assumed the title Gangaikonda Chola.

3. He is credited with consolidating the Chola power.

4. His naval power enabled him to conquer Srivijaya.

Answer: d. All the above

3. Assertion:- The Yuvarajas were appointed Governors in the provinces.

Reason:- This was done for their training in administration.

Answer: a. R is the correct explanation of A.

5. Arrange the events in chronological order.

3. A Muslim State was established in Madurai.

6. A Muslim State was established in Madurai.

1. What were the items exported during the later Chola period?

The revenue of the Chola state came mainly from the land. The land tax was known as Kanikadan.

The central administration was in the hands of king. As the head of the state, the king enjoyed enormous powers. The king's orders were written down in palm leaves by his officials or inscribed on the temple walls. The kingship was hereditary in nature. The ruler selected  his eldest son as the heir apparent. He was known as Yuvaraja. The Yuvarajas were appointed as Governors in the provinces mainly for administrative training.

The Chola rulers established a well-organised system of administration. The empire, for administrative convenience, was divided into provinces or mandalams. Each mandalam was sub- divided into naadus, Within each naadu, there were many kurrams (groups of villages). The lowest unit was the gramam (village).

1. Chola kings were great patrons of learning: Support the statement with details.

Chola kings were great patrons of learning. Rajendra I established a Vedic college at Ennayiram (now in Villupuram District). There were 340 students learning the Vedas, grammar and Upanishads under 14 teachers. This example was later followed by his successors and as a result two more such colleges had been founded, at Tirubuvanai near present-day Puducherry and Tirumukkoodal in present-day Chengalpattu district, in 1048 and 1067 respectively. The great literary works Periyapuranam and Kamba Ramayanam belong to this period.

1. I was responsible for Malik Kafur invasion.

3. I am a water supply channel.

5. I was a great port. Marco Polo visited me twice. 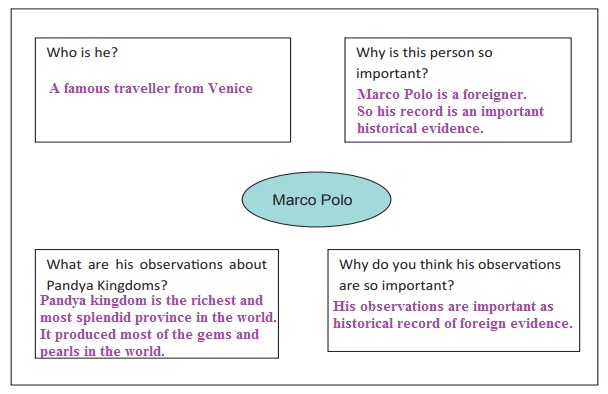 A famous traveller from Venice

Why is this person so important?

Marco Polo is a foreigner.

So his record is an important historical evidence.

What are his observations about Pandya Kingdoms?

Pandya kingdom is the richest and most splendid province in the world. It produced most of the gems and pearls in the world.

Why do you think his observations are so important?

His observations are important as historical record of foreign evidence.

2. Which port is associated with pearl fishery? Ans: Korkai

3. What do kasu, kalanchu and pon refer to? Ans: Gold coins of Pandyas

4. In which district is Kayal -Pattinam located? Ans: Thoothukudi

5. Who was the Pandya king, defeated by Parantaka I? Ans: Rajasimha II

6. Where is the famous Meenakshi temple located? Ans: Madurai.

Visit any one temple built during Chola or Pandya period and see its magnificence.