2. Who was the first prominent ruler of Pratiharas?

b. Naga Bhatta I

Answer: b. Naga Bhatta I

4. What was the most important cause of the invasion of Mahmud of Ghazni?

a. To destroy idolatry

b. To plunder the wealth of India

c. To spread Islam in India

d. To establish a Muslim state in India

Answer: b. To plunder the wealth of India

1. Dharmapala was the founder of Vikramashila University.

4. The Khandarya temple is in Madhya Pradesh.

Rajputra is a Sanskrit word.

2. King Gopala was elected by the people. - True

3. The temple at Mount Abu is dedicated to Lord Shiva. – False

The temple at Mount Abu is dedicated to Jain Tirthankaras

4. Raksha Bandan is a festival of brotherhood. - True

Arabians learnt the numerals 0-9 from Indians.

1. Assertion:- The tripartite struggle was to have control over Kanauj.

Reason:- Kanauj was a big city.

Answer: b. R is not the correct explanation of A.

2. Statement I. Mahipala could not extend his domain beyond Benaras.

b. II is correct.

c. I and II are correct.

Answer: c. I and II are correct

3. Assertion:- India’s Islamic period did not begin after Arab conquest of Sind in AD (CE)712.

c. A is correct and R is wrong.

d. A is wrong and R is correct.

Answer: a. R is the correct explanation of A.

4. Assertion:- The second battle of Tarain was lost by Prithiviraj.

Reason:-There was disunity among the Rajputs

c. A is correct and R is wrong.

d. A is wrong and R is correct.

Answer: c. A is correct and R is wrong.

5. Consider the following statements and find out which is/are correct.

3. Raksha Bandan was to counter the British attempt to create a divide between Hindus and Muslims.

d. All the above are correct.

Answer: d. All the above are correct.

1. Write about tripartite struggle over Kanauj.

There was a prolonged tripartite struggle between the Gurjara Pratiharas of Malwa, The Rashtrakutas of Deccan and the Palas of Bengal, as each one of them wanted to establish their supremacy over the fertile region of Kanauj. In the process, all the three powers were weakened.

The Pratiharas, the Chauhans, the Chalukyas (different from the Deccan Chalukyas), known as Solankis, and the Paramaras of Pawars were the four Rajput clans. All the four clans were of the Agnikula origin.

3. Who was the founder of Pala dynasty?

Gopala was the founder of Pala dynasty.

Two early Caliphates were 'Umayyads' and the 'Abbasids.

5. Name the ruler of Sind who was defeated by Qasim.

1. What was the impact of Arab conquest of Sind? (point out any five)

The Arab scholars visited Sind and studied many Indian literary works. They translated many Sanskrit books on astronomy, philosophy, mathematics and medicine into Arabic. They learnt the numerals 0 to 9 from India. Until then, the people in the West did not know the use of zero. Through the Arabs, Europe gained more knowledge in mathematics. The importance of zero was learnt by them from India. It is believed that the people in the West and the Arabs learnt the game of chess only from the Indians.

a. Difference between Mahmud Ghazni’s invasion and Muhammad Ghor’s invasion.

• Aimed at plundering the rich temples and cities of North India.

• Many cities were plundered and taken to the Capital Ghazni.

• Extension of his empire by conquering India.

• It led way to the establishment of the first Muslim Empire.

(Students discuss what they know about the words given here. They use the words from what they have learnt in a narrative form)

Write the event for the given year in each column. 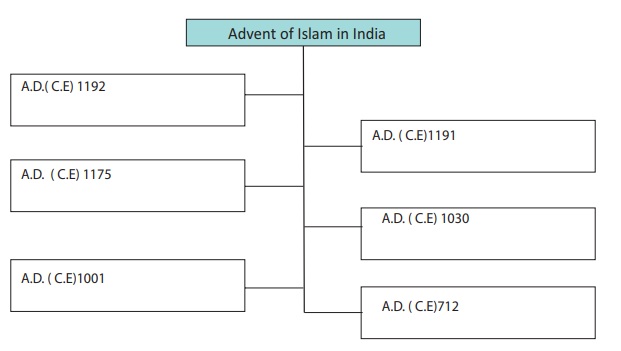 Advent of Islam in India

On the river map of India mark the territories ruled by Pratiharas, Chauhans, Palas and Paramaras. 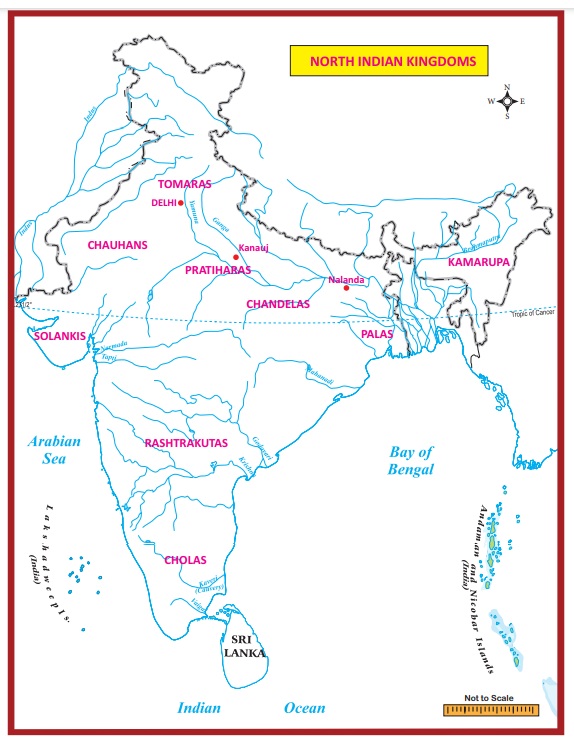 1. Who was the Shahi ruler of Punjab defeated by Mahmud of Ghazni? Ans: Jeyapala

3. How many Rajput clans were there? Ans: Thirty six

4. Who established the first Islamic empire in India? Ans: Muhammed of Ghor

5. Who was the first Sultan of Delhi? Ans: Qutb-ud-din Aibak

6. Where is Mecca? Ans: Arabia

Make an album with the pictures of temples built by Rajput rulers.