When Robert Clive obtained the Diwani of Bengal, Bihar and Orissa in 1765, there used to be an annual settlement (of land revenue). 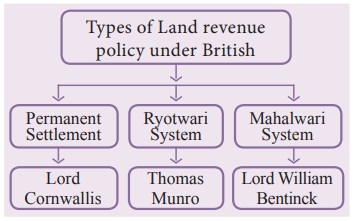 When Robert Clive obtained the Diwani of Bengal, Bihar and Orissa in 1765, there used to be an annual settlement (of land revenue). Warren Hastings changed it from annual to quinquennial (five- yearly) and back to annual again. During the time of Cornwallis, a ten years’ (decennial) settlement was introduced in 1793 and it was known Permanent Settlement. 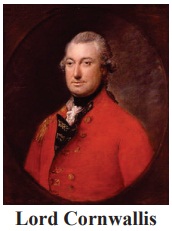 Permanent settlement were made in Bengal, Bihar, Orissa, Varanasi division of U.P., and Northern Karnataka, which roughly covered 19 percent of the total area of British India. It was known by different names like Zamindari, Jagirdari, Malguzari and Biswedari.

Salient Features of the Permanent Settlement

* The Zamindars were recognised as the owners of land as long as they paid the revenue to the East India Company regularly.

* The Zamindars acted as the agent of the Government for the collection of revenue from the cultivators.

* The amount of revenue that the Zamindars had to pay to the Company was firmly fixed and would not be raised under any circumstances.

* They gave 10/11 of the revenue collected by them from the cultivator to the Government.

* The Zamindars would grant patta (written agreements) to the ryots. The ryots became tenants since they were considered the tillers of the soil.

* All judicial powers were taken away from the Zamindars.

* Under this system many of the waste lands and forests became cultivable lands.

* The Zamindars became the owner of the land.

* The Zamindars were made free from the responsibility of providing justice.

* The Zamindars remained faithful to the British Government.

* This system secured a fixed and stable income for the British Government.

* The British Government had no direct contact with the cultivators.

* The rights of the cultivators were ignored and they were left at the mercy of the Zamindars.

* The peasants were almost treated as serfs.

* This system was made the Zamindars lethargic and luxurious.

* Many conflicts between the Zamindars and the peasants arose in rural Bengal.

Ryotwari system was introduced by Thomas Munro and Captain Read in 1820. Major areas of introduction of Ryotwari system included Madras, Bombay, parts of Assam, and Coorg provinces of British India. By Ryotwari system the rights of ownership was handed over to the peasants. British government collected taxes directly from the peasants. Initially, one-half of the estimated produce was fixed as rent. This assessment was reduced to one -third of the produce by Thomas Munro. The revenue was based on the basis of the soil and the nature of the crop. 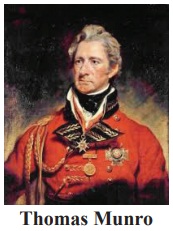 Rents would be periodically revised, generally after 20 to 30 years. The position of the cultivators became more secure. In this system the settlement was made between the Government and the Ryots. Infact, the Government later claimed that the land revenue was rent and not a tax.

Salient Features of the Ryotwari system

* Revenue settlement was done directly with the ryots.

* Measurement of field and an estimate of produce was calculated.

Effects of the Ryotwari Settlement

* In most areas the land revenue fixed was excessive; the ryots were hardly left with bare maintenance even in the best of seasons.

* Under this system the government exploited the farmers instead of Zamindars.

Mahalwari system, a brain child of Holt Mackenzie was modified version of the Zamindari settlement introduced in the Ganga valley, the North-West Province, parts of the Central India and Punjab in 1822. Lord William Bentinck was to suggest radical changes in the Mahalwari system by the guidance of Robert Martins Bird in 1833. Assessment of revenue was to be made on the basis of the produce of a Mahal or village. All the proprietors of a Mahal were severally and jointly responsible for the payment of revenue. Initially the state share was fixed two-thirds of the gross produce. Bentinck, therefore, reduced to fifty percent. The village as a whole, through its headman or Lambardar, was required to pay the revenue. This system was first adopted in Agra and Awadh, and later extended to other parts of the United Provinces. The burden of all this heavy taxation finally fell on the cultivators. 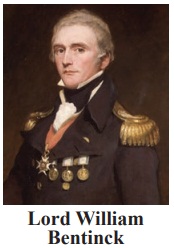 Salient Features of the Mahalwari Settlement

* The Lambardar acted as intermediaries between the Government and the villagers.

* It was a village-wise assessment. One person could hold a number of villages.

* The village land belonged to the village community.

Effects of the Mahalwari Settlement

* The Lambardar enjoyed privileges which was misused for their self-interest.

* This system brought no benefit to the cultivators.

* It was a modified version of the Zamindari system and benefited the upper class in villages.

Impact of the British land revenue system on the cultivators

* A common feature of all the settlements was the assessment and the maximize income from land. It resulted in increasing land sales and dispossession.

* The peasants were overburdened with taxation. Due to the tax burden and famines, in general, the people suffered in poverty and burdened with debts. They had to seek the moneylenders who became rich and acquired lands from the peasants.

* The Zamindars, money-lenders and lawyers exploited the poor peasants.

* The stability and continuity of the Indian villages was shaken.

* Cottage industries disappeared on account of the import of British goods and the peasants had nothing to supplement their income.

* The old body of custom was replaced by new apparatus of law, courts, fees, lawyers and formal procedures.

* The British policy proved advantageous only to the government of a privileged section of the society at the cost of the cultivators who were the rightful owners of their lands and claimants of the larger share of the produce.