The iso-cost line is an important component in analysing producer’s behaviour. 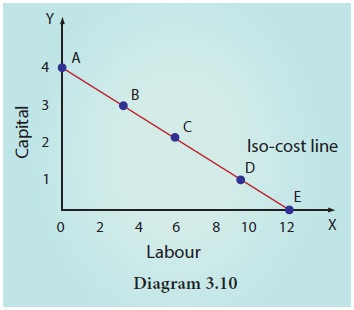 Suppose that a producer has a total budget of  Rs.120 and for producing a certain level of output, he has to spend this amount on two factors Labour (L) and Capital (K). Prices of factors K is  Rs. 30 and L is  Rs.10. Iso Cost Curve can be drawn by using the following hypothetical table.

Thus, all the combinations A, B, C, D and E cost the same total expenditure.

From the figure 3.10, it is shown that the costs to be incurred on capital and labour are represented by the triangle OAE. The line AE is called as Iso-cost line.