Producer equilibrium implies the situation where producer maximizes his output.

Producer equilibrium implies the situation where producer maximizes his output. It is also known as optimum combination of the factors of production. In short, the producer manufactures a given amount of output with ‘least cost combination of factors’, with his given budget.

Optimum Combination of Factors implies either

The two conditions that are to be fulfilled for the attainment of producer equilibrium are:

·           At point of tangency, the iso-quant curve must be convex to the origin or MRTSLk must be declining.

When the outlay and prices of two factors, namely, labour and capital are given, producers attain equilibrium (or least cost combination of factors is attained by the firm) where the iso-cost line is tangent to an iso-product curve. It is illustrated in the following Diagram 3.11. 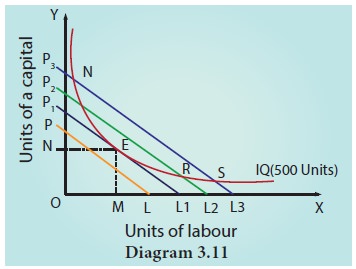 In the above figure, profit of the firm (or the producer) is maximised at the point of equilibrium E.

Hence, it can be stated as follows.

At point E, the firm employs OM units of labour and ON units of capital. In other words, it obtains least cost combination or optimum combination of the two factors to produce the level of output denoted by the iso-quant IQ.

The other points such as H, K, R and S lie on higher iso cost lines indicating that a larger outlay is required, which exceeds the financial resources of the firm.