Features of the Factors of Production

Features of the Factors of Production

These two factors produce some units of goods for the purpose of consumption. And as consumption of these goods takes place, there is the possibility of some of these goods getting left over. Thus, saving is production minus consumption. This saved amount is called as capital, which serves as investment in the production process. Also, organisation or enterprise is a special form of labour. The third and the fourth factors are called ‘secondary factors of production’.

These four factors depend on each other. They have a coordinated impact on production of goods and services.

In ordinary sense ‘land’ refers to the soil or the surface of the earth or ground. But, in Economics, land means all gifts of Nature owned and controlled by human beings which yield an income. Land is the original source of all material wealth. The economic prosperity of a country depends on the richness of her natural resources. The quality and quantity of agricultural wealth are determined by the nature of soil, climate and rainfall. 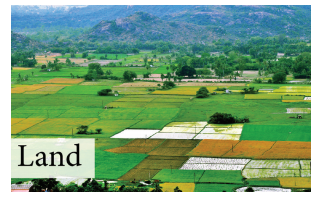 The agricultural products are the basis of trade and industry. Industry survives on the availability of coal-mines or waterfall for electricity production. Hence, all aspects of economic life like agriculture, trade and industry are generally influenced by natural resources which are called as “Land” in economics.

Labour is the active factor of production. In common parlance, labour means manual labour or unskilled work. But in Economics the term ‘labour’ has a wider meaning. 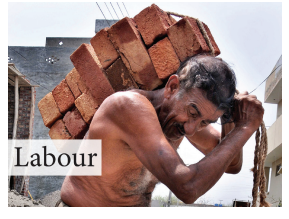 It  refers to any work undertaken for securing an income or reward. Such work may be manual or intellectual. For example, the work done by an agricultural worker or a cook or rickshaw puller or a mason is manual. The work of a doctor or teacher or an engineer is intellectual. In short, labour in economics refers to any type of work performed by a labourer for earning an income.

According to Marshall, labour represents services provided by the factor labour, which helps in yielding an income to the owner of the labour-power.

Marshall says “capital consists of all kinds of wealth other than free giftsofnature,whichyield income”. Bohm-Bawerk defines it as ‘a produced means of production’. As said earlier, capital is a secondary means of production. It refers to that part of production which represents ‘saving used as investment’ in the further production process. For example, the entire mango is not eaten; a part of that (its nut) is used to produce more mangoes. 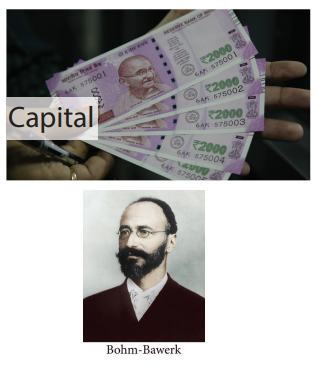 It is a stock concept. All capital is wealth but all wealth is not capital. For example, tractor is a capital asset which can be used in cultivation (production) of farm, but due to some reason the same is kept unused (idle) for some period. It cannot be termed as capital for that period. It is only wealth.

Capital may be tangible or intangible. For example, buildings, plants and machinery, factories, inventories of inputs, warehouses, roads, highways etc are tangible capital. The examples for intangible capital are investment on advertisement, expenses on training programme etc.

Financial Capital means the assets needed by a firm to provide goods and services measured in term of money value . It is normally raised through debt and equity issues .The prime aim of it is to a mass wealth in terms of profit.

The man behind organizing the business is called as ‘Organizer’ or ‘Entrepreneur’. An organiser is the most important factor of production. He represents a special type of labour. Joseph Schumpeter says that an entrepreneur innovates, coordinates other factors of production, plans and runs a business. He not only runs the business, but bears the risk of business. His reward is residual. This residual is either positive (profit) or negative (loss) or zero. 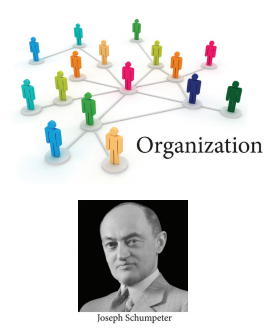 Functions of an Organizer (Entrepreneur)

Initiation: An organizer is the initiator of the business, by considering the situation and availability of resources and planning the entire process of business or production.

Innovation: A successful entrepreneur is always an innovator. He introduces new methods in the production process.

Coordination: An organizer applies a particular combination of the factors of production to start and run the business or production.

Control, Direction and Supervision: An organiser controls so that nothing prevents the organisation from achieving its goal. He directs the factors to get better results and supervises for the efficient functioning of all the factors involved in the process of production.