In Economics, an iso-quant is a curve drawn by joining the combinations of changing the quantities of two or more inputs which give the same level of output.

Production function may involve, at a time, the use of more than one variable input. This is presented with the help of iso- quant curves. The two words ‘Iso’ and ‘quant’ are derived from the Greek language, meaning ‘equal’ and ‘quantity’ respectively. In our presentation only two factors, labour and capital are used.

In Economics, an iso-quant is a curve drawn by joining the combinations of changing the quantities of two or more inputs which give the same level of output. Isoquants are similar to indifference curves.

An iso- quant curve can be defined as the locus of points representing various combinations of two inputs capital and labour yielding the same output. The iso-quant is also called as the “Equal Product Curve” or the “Product Indifference Curve”

According to Ferguson, «An iso-quant is a curve showing all possible combinations of inputs physically capable of producing a given level of output”

It is seen from the table 3.2 that the five combinations of labour units and units of capital yield the same level of output, i.e., 400 meters of cloth.

Iso-quants are based on the following assumptions.

1.        It is assumed that only two factors are used to produce a commodity.

2.        Factors of production can be divided into small parts.

4.        The substitution between the two factors is technically possible. That is, production function is of ‘variable proportion’ type rather than fixed proportion.

5.        Under the given technique, factors of production can be used with maximum efficiency.

Let us suppose that there are two factors namely., labour and capital. An Iso-quant schedule shows the different combinations of these two inputs that yield the same level of output. It is given below.

An equal product curve represents all those combinations of two inputs which are capable of producing the same level of output. An iso-product curve can be drawn with the help of isoquant schedule. 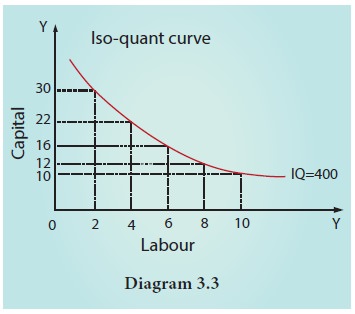 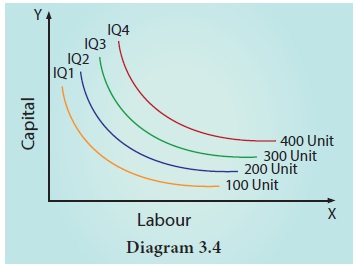 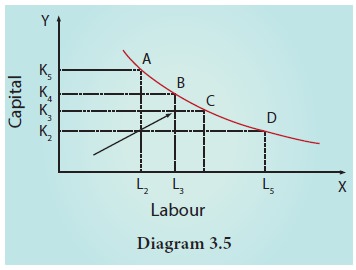 1. The iso-quant curve has negative slope.

It slopes downwards from left to right indicating that the factors are substitutable. If more of one factor is used, less of the other factor is needed for producing the same level of output.

In the diagram combination A refers to more of capital K5 and less of labour L2. As the producer moves to B, C, and D, more labour and less capital are used.

2. Convex to the origin.

This explains the concept of diminishing Marginal Rate of Technical Substitution (MRTSLK). For example, the capital substituted by 1 unit of labour goes on decreasing when moved from top to bottom. If so, it is called diminishing MRTS. Constant MRTS (straight line) and increasing MRTS (concave) are also possible. It depends on the nature of iso-quant curve.

This means that factors of production are substitutable to each other. The capital substituted per unit of labour goes on decreasing when the iso-quant is convex to the origin.

For instance, point A lie on the iso-quants IQ1 and IQ2. But the point C shows a higher output and the point B shows a lower level of output IQ1. If C=A, B=A, then C=B. But C>B which is illogical. 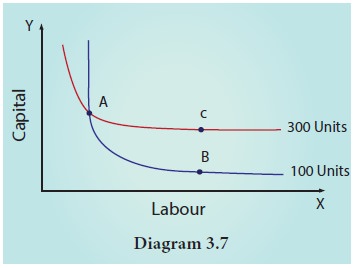 4. An upper iso-quant curve represents a higher level of output. 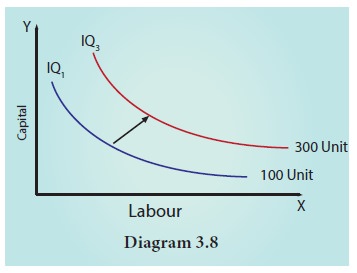 The arrow in the figure shows an increase in the output with a right and upward shift of an iso-quant curve.

5. Iso-quant curve does not touch either X axis or Y axis.

No iso-quant curve touches the X axis or axis because in IQ1, only capital is used, and in IQ2 only labour is used. 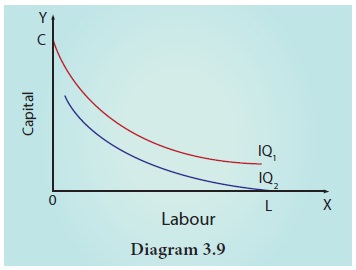