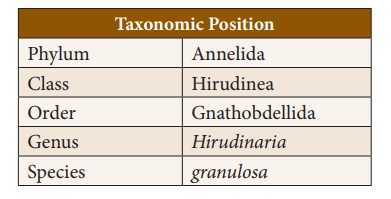 Hirudinaria granulosa (Indian Cattle Leech) is found in India, Bangladesh, Pakistan, Myanmar and Srilanka. It lives in freshwater ponds, lakes, swamps and slow streams. They are ectoparasitic and feed on the blood of fishes, frogs, cattle and human. It is sanguivorous (blood sucking) in nature.

Shape and Size: The body of a leech is soft, vermiform, elongated and segmented. It becomes ribbon shaped when extended and almost cylindrical when contracted. Leeches may grow to a length of 35cm.

Segmentation: Metamerism is the segmentation of the body. The body of leech is metamerically divided into 33 segments. The segments are arranged one behind the other. Each segment is further superficially subdivided into rings or annuli. A temporary clitellum is formed on segments 9-11, which is meant to produce a cocoon during the breeding season. 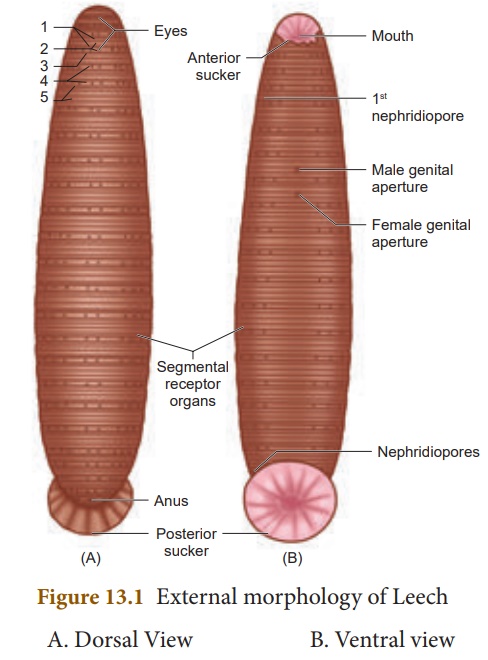 (i) Mouth: It is located in the middle of anterior sucker.

(ii) Anus: Anus is a small aperture that opens on the mid-dorsal side of 26th segment.

(iii) Nephridiopores: Nephridia open to the exterior by 17 pairs of nephridiopores. They lie ventrally on the last annulus of each segment from 6 to 22.

(iv) Male genital pore: It is a mid-ventral opening, situated between second and third annuli of 10th segment.

3. Divisions of the Body

The body of leech is divided into six regions. 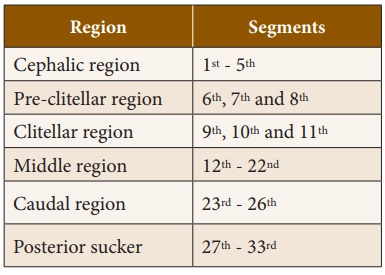 Body wall of leech includes five layers: (i) cuticle (outermost layer) (ii) epidermis which lies below the cuticle (iii) dermis which lies below the epidermis formed of connective tissue (iv) muscular layer formed of circular and longitudinal muscles (v) botryoidal tissue lies beneath longitudinal muscles and fills the entire coelom around the gut.

(i) Looping or Crawling movement

This type of movement is brought about by the contraction and relaxation of muscles. The two suckers serve for attachment during movement on a substratum.

The alimentary canal of leech is a straight tube running from the mouth to the anus. Mouth is a triradiate aperture situated in the middle of the anterior sucker that leads into the small buccal cavity. The wall of the buccal cavity bears three jaws with single row of minute teeth. The jaws are provided with papillae which bear the openings of salivary glands. Mouth and buccal cavity occupy the first five segments.

The buccal cavity leads into muscular pharynx. It is surrounded by salivary glands. The secretion of saliva contains hirudin which prevents the coagulation of blood. Pharynx leads into crop through a short and narrow oesophagus.

Crop is the largest portion of the alimentary canal. It is divided into a series of 10 chambers. The chambers communicate with one another through circular apertures surrounded by sphincters. A pair of lateral, backwardly directed caecae arises as blind outgrowth from each chamber known as caeca or diverticula. Crop and its diverticula can store large amount of blood which can be slowly digested.

The last chamber of crop opens into stomach. The stomach leads into intestine which is a small straight tube that opens into rectum. The rectum opens to the exterior by anus.

The leech feeds by sucking the blood of cattle and other domestic animals. During feeding the leech attaches itself to its victim strongly by the posterior sucker. The leech makes a triradiate or Y shaped incision in the skin of the host by the jaws protruded through the mouth. The blood is sucked by muscular pharynx and the salivary secretion is poured.

The ingested blood is stored in crop chambers and its diverticulum. The blood passes from the crop into the stomach. Digestion takes place in stomach by the action of proteolytic enzyme. The digested blood is then absorbed slowly by the intestine. Undigested food is stored in rectum and egested through anus.

Leeches prevent blood clotting by secreting a protein called hirudin. They also inject an anaesthetic substance that prevents the host from feeling their bite. 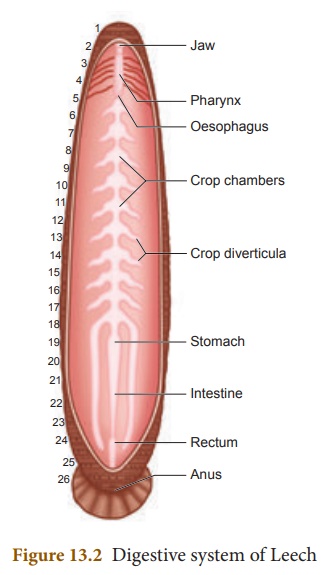 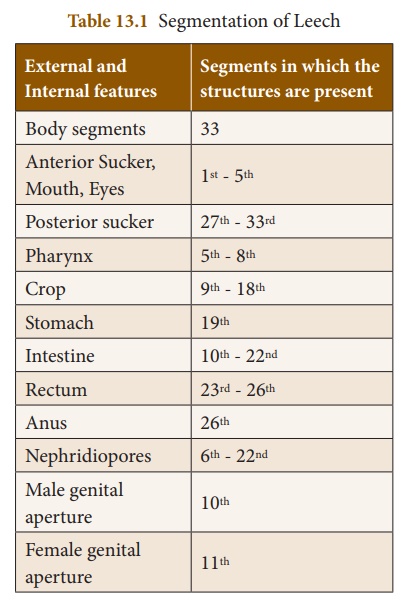 Respiration takes place through the skin in leech. Dense network of tiny blood vessels called as capillaries containing the haemocoelic fluid extend in between the cells of the epidermis. The exchange of respiratory gases takes place by diffusion. Oxygen dissolved in water diffuses through the skin into haemocoelic fluid, while carbon dioxide diffuses out. The skin is kept moist and slimy due to secretion of mucus which also prevents it from drying.

In leech, circulation is brought about by haemocoelic system. There are no true blood vessels. The blood vessels are replaced by channels called haemocoelic channels or canals filled with blood like fluid. The coelomic fluid contains haemoglobin.

The central nervous system of leech consists of a nerve ring and a paired ventral nerve cord. 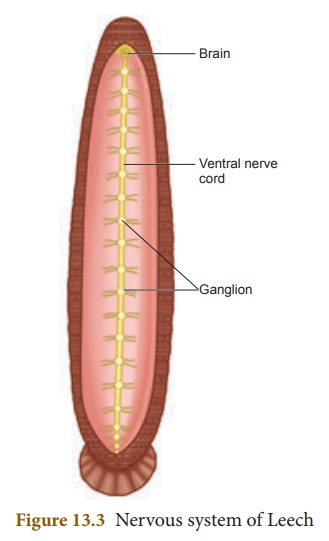 In leech, excretion takes place by segmentally arranged paired tubules called nephridia. There are 17 pairs of nephridia which open out by nephridiopores from 6th to 22nd segments.

Leech is hermaphrodite because both the male and female reproductive organs are present in the same animal.

There are eleven pairs of testes, one pair in each segment from 12 to 22 segments. They are in the form of spherical sacs called testes sacs. From each testis arises a short duct called vas efferens, which join with the vas deferens. The vas deferens becomes convoluted to form the epididymis or sperm vesicle, to store spermatozoa.

The epididymis leads to a short duct called ejaculatory duct. The ejaculatory ducts on both sides join to form the genital atrium. The atrium consists of two regions, the coiled prostate glands and the penial sac consisting of penis that opens through the male genital pore.

It consists of ovaries, oviducts and vagina. There is a single pair of ovary in the 11th segment on the ventral side. Each ovary is a coiled ribbon-shaped structure.

The ova are budded off from the ovary. From each ovary runs a short oviduct. The oviducts of the two sides joins together, to form a common oviduct. The common oviduct opens into a pear-shaped vagina which lies mid-ventrally in the posterior part of the 11th segment.

(i) Internal fertilization takes place. This is followed by cocoon formation. Cocoon is also known as egg case which is formed around the 9th, 10th and 11th segments.

(ii) Development is direct and proceeds in cocoon which contain one to 24 embryos. 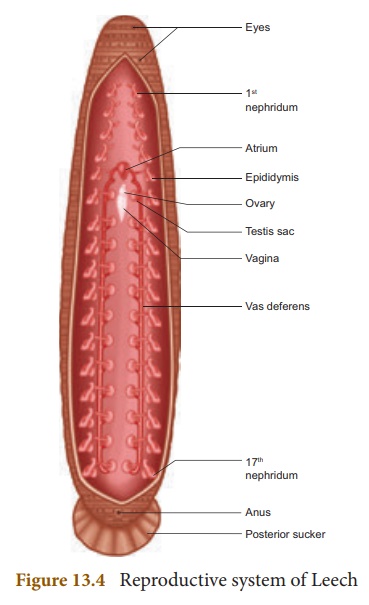 Leeches lead a parasitic mode of life by sucking the blood of vertebrates and show several important adaptations in their structure.

b)             Anterior and posterior ends of the body are provided with suckers by which the animal attaches itself to the body of the host.

d)             The salivary glands produce hirudin which does not allow the blood to coagulate. Thus, a continuous supply of the blood is maintained.

f)               Blood is stored in the crop. It gives nourishment to the leech for several months. Due to this reason there is no elaborate secretion of the digestive juices and enzymes.