1. In leech locomotion is performed by

2. The segments of leech are known as

3. Pharyngeal ganglion in leech is a part of

4. The brain of leech lies above the

5. The body of leech has

7. The animals which give birth to young ones are

1. The posterior sucker is formed by the fusion of the last 7 segments.

2. The existence of two sets of teeth in the life of an animal is called diphyodont dentition.

3. The anterior end of leech has a lobe-like structure called anterior sucker.

4. The blood sucking habit of leech is known as sanguivorous.

5. kidney separate nitrogenous waste from the blood in rabbit.

III. Identify whether the statements are True or False. Correct the false statement

1. An anticoagulant present in saliva of leech is called heparin. - False

Anticoagulant present in saliva of leech is called hirudin.

2. The vas deferens serves to transport the ovum. - False

The vas deferens serves to transport the sperm.

3. The rabbit has a third eyelid called tympanic membrane which is movable. - False

The rabbit has a third eyelid called nictitating membrane which is movable.

4. Diastema is a gap between premolar and molar teeth in rabbit. - False

Diastema is a gap between incisors and premolar in rabbit.

5. The cerebral hemispheres of rabbit are connected by band of nerve tissue called corpora quadrigemina. - False

The cerebral hemispheres of rabbit are connected by a band of nerve tissue called corpus callosum. 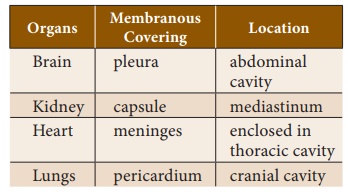 V. Answer in a sentence

1. Give the common name of the Hirudinar via granulosa.

Indian cattle leech is the common name of Hirudinaria granulosa.

2. How does leech respire?

Leech respires through the skin.

3. Write the dental formula of rabbit.

4. How many pairs of testes are present in leech?

11 pairs of testes are present in leech.

5. How is diastema formed in rabbit?

The gap between the incisors, and premolar is called diastema. It helps in mastication and chewing of food.

6. What organs are attached to the two bronchi?

Lungs are attached to the two bronchi.

7. Which organ acts as suction pump in leech?

8. What does CNS stand for?

9. Why is the teeth of rabbit called heterodont?

10. How does leech suck blood from the host?

Muscular pharynx helps the leech to suck blood from the host.

1. Why are the rings of cartilages found in trachea of rabbit?

Trachea is the wind pipe. Tracheal walls are supported by rings of cartilage which help in the free passage of air.

Leeches lead a parasitic mode of life by sucking the blood of vertebrates, and show several important modifications in their structure.

(i) Blood is sucked by pharynx.

(ii) Anterior and posterior ends of the body are provided with suckers by which the animal attaches itself to the body of the host.

(iii) The three jaws inside the mouth, causes a painless Y-shaped wound in the skin of the host.

(iv) The salivary glands produce hirudin which does not allow the blood to coagulate. Thus, a continuous supply of the blood is maintained.

(vi) Blood is stored in the crop. It gives nourishment to the leech for several months.

1. How is the circulatory system designed in leech to compensate the heart structure ?

(i) In leech, circulation is brought about by haemocoelic system.

(ii) There are no true blood vessels. The blood vessels are replaced by channels called haemocoelic channels or canals filled with blood-like fluid. The coelomic fluid contains haemoglobin.

(iv) The other two channels lie on either (lateral) side of the alimentary canal which serve as heart and have inner valves.

(v) All the four channels are connected together posteriorly in the 26th segment.

2. How does locomotion take place in leech?

(i) Looping or Crawling movement:

This type of movement is brought about by the contraction and relaxation of muscles. The two suckers serve for attachment during movement on a substratum.

3. Explain the male reproductive system of rabbit with a labelled diagram. 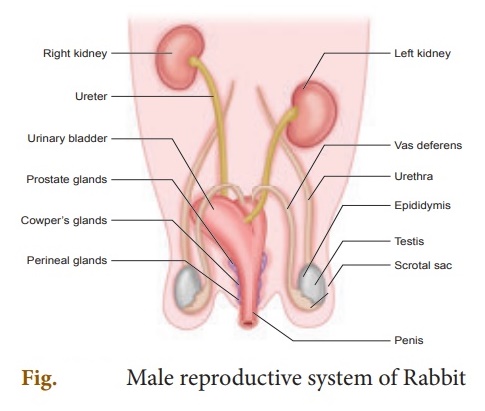 (i) The male reproductive system of rabbit consists of a pair of testes which are ovoid in shape.

(ii) Testes are enclosed by scrotal sacs in the abdominal cavity.

(iv) This network of tubules lead into a coiled tubule called epididymis, which lead into the sperm duct called vas deferens.

(v) The vas deferens join in the urethra just below the urinary bladder. The urethra runs backward and passes into the penis.

(vi) There are three accessory glands namely prostate gland, cowper’s gland and perineal gland. Their secretions are involved in reproduction.

1. Arjun is studying in tenth standard. He was down with fever and went to meet the doctor. As he went to the clinic he saw a patient undergoing treatment for severe leech bite. Being curious, Arjun asked the doctor why leech bite was not felt as soon as it attaches to the skin ? What would have been the reply given by the doctor?

The doctor would have explained to Arjun as follows : Leeches inject an anaesthetic substance that prevents the host from feeling their bite. They also prevent blood clotting by secreting a protein called hirudin. Thus the person who is bit by the leech will feel the pain only ofter a long time.

2. Shylesh has some pet animals at his home. He has few rabbits too, one day while feeding them he observed something different with the teeth. He asked his grandfather, why is it so? What would have been the explanation of his grandfather?

Shylesh observed that in Rabbits there was a gap between incisor and premolars. This is called diastema. This is due to absence of canines since rabbit is herbivorous in nutrition. Canines are teeth needed for flesh eating animals. His grandfather explained to him that the diastema also helps in mastication and chewing of food in herbivorous animals.

1. Leeches do not have an elaborate secretion of digestive juices and enzymes -Why ?

(i) The leech is sangivorous in habit, sucking the blood of cattle and other domestic animals.

(ii) Digestion takes place in stomach by the action of proteolytic enzyme. The digested blood is then absorbed slowly by the intestine.

(iii) Blood is stored in the crop. It gives nourishment to the leech for several months.

(iv) Due to this reason there is no elaborate secretion of the digestive juices and enzymes.

2. How is the digestive system of rabbit suited for herbivorous mode of feeding?

(i) The digestive system of rabbit includes the alimentary canal and digestive gland.

(iii) Caecum is a .thin walled sac present at the junction of small intestine and large intestine. lt contains bacteria that helps in digestion of cellulose.

(iv) In rabbit the teeth are of different types. Hence, the dentition is called heterodont.

(v) There are four kinds of teeth in mammals viz. the Incisors (I), Canines (C), Premolars (PM) and Molars (M). This is expressed in the form of a dental formula.

(vi) There are three kinds of teeth in rabbits.

(vii) In rabbit it is written as 2033/1023 Canines are absent. The gap between the incisors and premolar is called diastema. It helps in mastication and chewing of food in herbivorous animals. 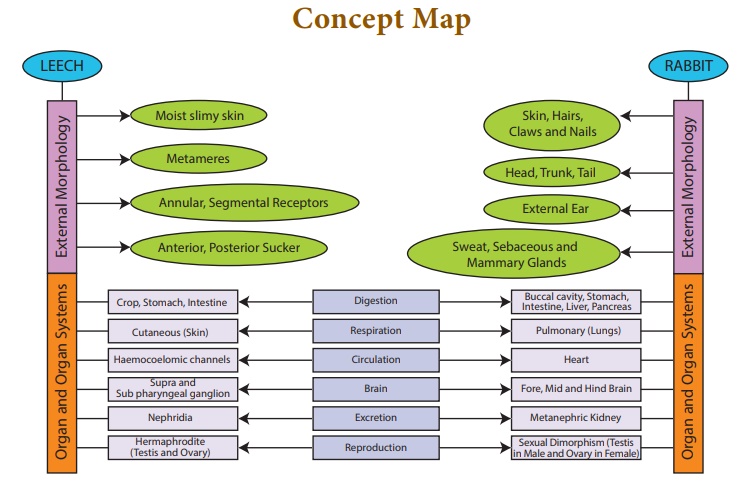