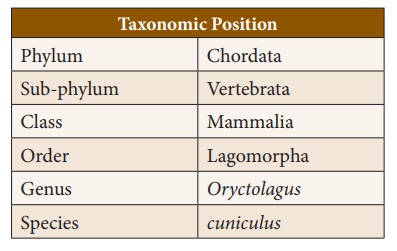 Rabbits are gentle and timid animals. They show leaping movement and live in burrows.

They are distributed throughout the world. They are herbivorous animals feeding on grass and vegetables like turnips, carrots and lettuce. Rabbits are gregarious (moving in groups) animals 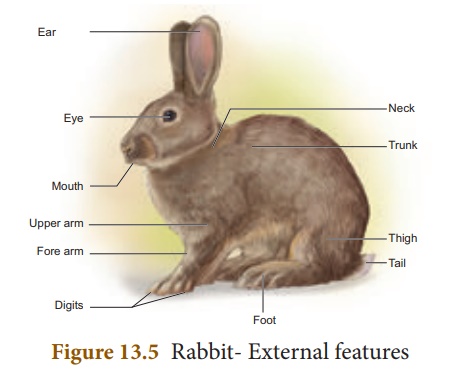 Shape, Size and Colouration: It has an elongated and cylindrical body. Males and females are of the same size. They grow about 45 cm in length and weigh about 2.25 kg as adult. The colour varies from white to black and white. Body is covered with fur which serves to keep it warm.

Body-division: The body of the rabbit is divisible into the head, neck, trunk and tail.

Head: Head is ovoid, flattened and bears a truncate snout. It contains mouth, external nares, eyes, ears and vibrissae. The mouth is a transverse slit-like bounded by upper lip and lower lip. Just above the mouth are two oblique openings called nostrils. From each side of the upper lip tactile hairs or vibrissae (whiskers) project outwards. A pair of large, movable external ear or pinnae is situated at the top of the head.

Neck: The neck connects the head with the trunk. It helps to turn the head.

Trunk: The trunk is divisible into an anterior thorax and a posterior abdomen. In females, four or five teats or nipples are present on the ventral surface between the thorax and abdomen.

The trunk bears two pairs of pentadactyl limbs. The forelimbs are shorter than the hind limbs. All the digits bear claws.

Tail: The tail is short. It is used to give signals to other rabbits in the event of danger.

Integument (Skin): The integument forms the outer covering of the body. The structures which are derived from it are hairs, claws, nails and glands like sweat glands, sebaceous glands and mammary glands.

Mammary glands are modified glands of the skin. They secrete milk and help in nourishing young ones. The sweat glands and sebaceous glands embedded in the skin regulate the body temperature.

Rabbit is a coelomate animal. The body is divisible into thoracic cavity and abdominal cavity separated by transverse partition called diaphragm. Diaphragm is the characteristic feature of mammals. Breathing movements are brought by the movement of the diaphragm.

Lungs and heart lie in the thoracic cavity, whereas, abdominal cavity encloses digestive and urinogenital system.

Teeth are hard bone- like structures used to cut, tear and grind the food materials. The 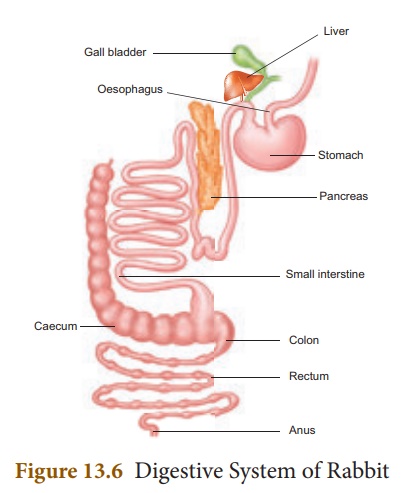 In rabbit the teeth are of different types. Hence, the dentition is called heterodont. There are four kinds of teeth in mammals viz. the incisors (I), canines (C), premolars (PM) and molars (M). This is expressed in the form of a dental formula. 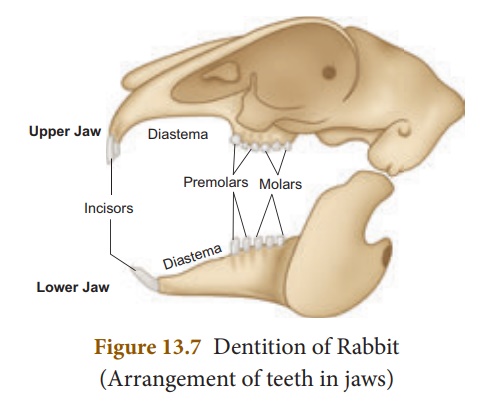 Dental formula is the simple method of representing the teeth of a mammal. The number of each kind of tooth in the upper and the lower jaws on one side is counted. 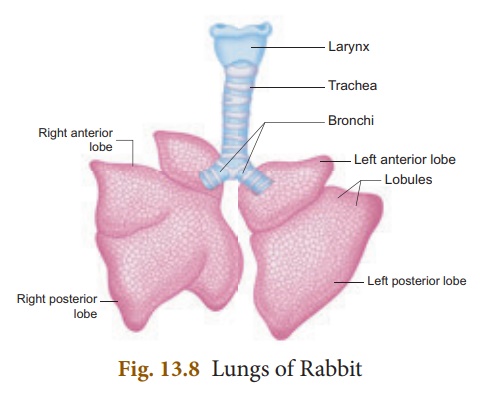 The anterior part of the wind pipe is enlarged to form the larynx or voice box with its wall supported by four cartilaginous plates. Inside the larynx lies the vocal cord and its vibrations result in the production of sound. The larynx leads into trachea or wind pipe.

Tracheal walls are supported by rings of cartilage which help in the free passage of air. The epiglottis prevents the entry of food into the trachea through the glottis. The trachea divides into two branches called the bronchi one entering into each lung and dividing into further branches called bronchioles which end in alveoli.

The circulatory system is formed of blood, blood vessels and heart. The heart is pear shaped and lies in the thoracic cavity in between the lungs. It is enclosed by pericardium, a double layered membrane. 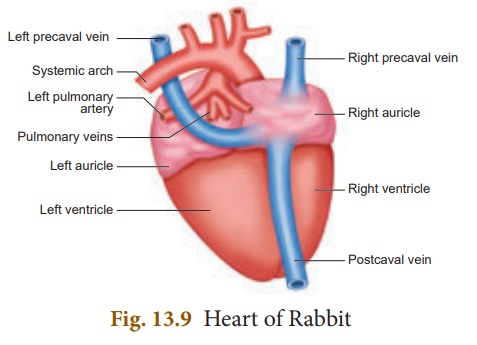 CNS consists of brain and spinal cord. PNS is formed of 12 pairs of cranial nerves and 37 pairs of spinal nerves. ANS comprises sympathetic and parasympathetic nerves.

Brain is situated in the cranial cavity and covered by three membranes called an outer duramater, an inner piamater and a middle arachnoid membrane. The brain is divided into forebrain (prosencephalon), midbrain (mesencephalon) and hindbrain (rhombencephalon). 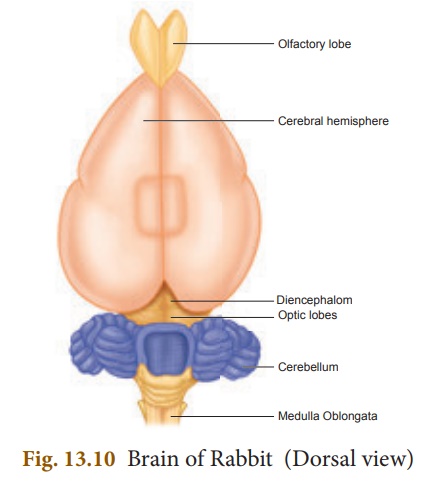 The midbrain includes the optic lobes. The hindbrain consists of the cerebellum, pons varolii and medulla oblongata. You will study about the details of mammalian brain in the chapter on nervous system.

It comprises the urinary or excretory system and the genital or reproductive system. Therefore, they are usually described as urinogenital system in vertebrates.

Each kidney is made of several nephrons. It separates the nitrogenous wastes from blood and excretes it in the form of urea. Kidneys are dark red, bean shaped organs situated in the abdominal cavity. From each kidney arises the ureters which open posteriorly into the urinary bladder and leads into a thick walled muscular duct called urethra.

Sexual dimorphism is exhibited in rabbits. The male and female sexes are separate and are morphologically different.

The male reproductive system of rabbit consists of a pair of testes which are ovoid in shape. Testes are enclosed by scrotal sacs in the abdominal cavity. Each testis consists of numerous fine tubules called seminiferous tubules. This network of tubules lead into a coiled tubule called epididymis, which lead into the sperm duct called vas deferens. The vas deferens join in the urethra just below the urinary bladder. The urethra runs backward and passes into the penis.

There are three accessory glands namely prostate gland, cowper’s gland and perineal gland. Their secretions are involved in reproduction. 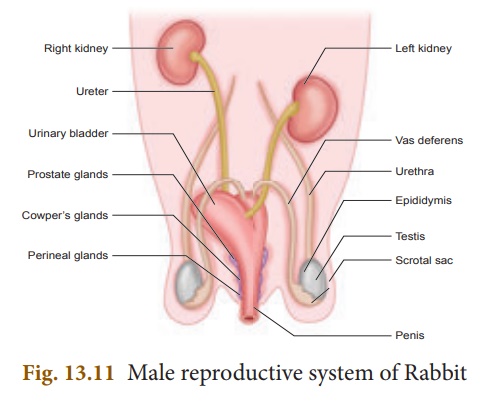 The female reproductive system of rabbit consists of a pair of ovaries which are small ovoid structures. They are located behind the kidneys in the abdominal cavity.

A pair of oviducts opens into the body cavity by a funnel shaped opening from each side of the ovary. The anterior part of the oviduct is the fallopian tube. It leads into a wider tube called the uterus. The uterus join together to form a median tube called vagina. The common tube is formed by the union of urinary bladder and the vagina and is called the urinogenital canal or vestibule. It runs backwards and opens to the exterior by a slit-like aperture called vulva.

A pair of Cowper’s gland and perineal gland are the accessory glands present in the female reproductive system. 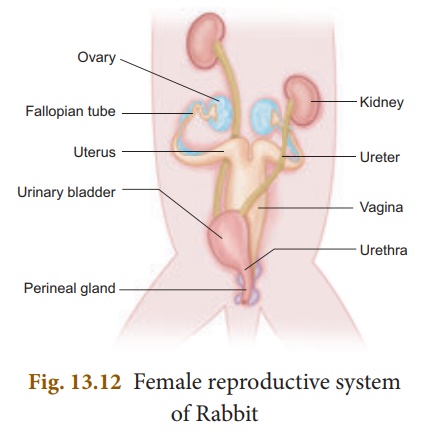