The Cerebrospinal Fluid - Ventricles of the Brain

The cerebrospinal fluid (CSF) fills the subarachnoid space. It also extends into the ventricles of the brain, and into the central canal of the spinal cord.

The CSF provides a fluid cushion which protects the brain from injury. It probably also helps to carry nutrition to the brain, and to remove waste products.

Samples of CSF are often required for help in clinical diagnosis. They are obtained most easily by lumbar puncture. In this procedure a needle is introduced into the subarachnoid spacethrough the interval between the third and fourth lumbar vertebrae. Under exceptional circumstances CSF may be obtained by cisternal puncture in which a needle is passed into the cerebellomedullary cistern.

The total volume of CSF is about 140ml of which about 25ml is in the ventricles. The CSF is constantly replaced.

The CSF consists of water in which are present sodium chloride, potassium, glucose and proteins. The proportions of these substances differ considerably in blood and CSF and hence it is believed that CSF is formed by an active secretory process, and not by passive filtration. The epithelium and other tissues of the choroid plexuses form an effective barrier between the blood and the CSF. This blood - CSF barrier allows selective passage of substances from blood to CSF, but not in the reverse direction. The arachnoid villi provide a valvular mechanism for flow of CSF into blood without permitting back-flow of blood into the CSF.

An abnormal increase in the quantity of CSF can lead to enlargement of the head in children. This condition is called hydrocephalus. Abnormal pressure of CSF leads to degeneration of brain tissue. Hydrocephalus may be caused by excessive production of CSF, by obstruction to its flow, or by impaired absorption through the arachnoid villi. It is classified asobstructive when there is obstruction to flow of CSF from the ventricular system to the subarachnoid space; or as communicating when such obstruction is not present. Obstruction is most likely to occur where CSF has to pass through narrow passages e.g., the interventricular foramina, the aqueduct, and the apertures of the fourth ventricle. In each of the above instances dilatation is confined to cavities proximal to the obstruction. Occasionally, meningitis may lead to obstruction of the narrow interval between the tentorium cerebelli and the brainstem. Meningitis may also lead to hydrocephalus by affecting the arachnoid villi, thus hampering the reabsorption of CSF. Also see Arnold Chiari malformation.

CSF and Injuries to the Skull

The skull is frequently injured by blows with a heavy object, and frequently in automobile accidents. Injury can be avoided by wearing a protective helmet.

1.              Direct injury leading to fractures of the skull can damage any area of the brain. CSF can flow out and parts of brain can herniate out of the skull.

2.              Even in the absence of a fracture direct injury can throw the brain against the opposite wall of the skull injuring it. This is contracoup injury.

In fractures of the base of the skull CSF may flow into the nose. Haemorrhage may take place into brain tissue, or into extradural space raising intracranial tension.

We have seen that a needle can be introduced into the subarachnoid space through the interval between the third and fourth lumbar vertebrae. This procedure, called lumbar puncture, is useful for several purposes.

(a)           The pressure of CSF can be estimated, roughly, by counting the rate at which drops flow out of the needle; or more accurately, by connecting the needle to a manometer.

(b)          Samples of CSF can be collected for examination. The important points to note about CSF are its colour, its cellular content, and its chemical composition (specially the protein and sugar content).

(c)           Lumbar puncture may be used for introducing air or radio-opaque dyes into the subarachnoid space for certain investigative procedures. Drugs may also be injected for treatment.

(d)          Mention may be made here of a use of lumbar puncture, not related to neurological diagnosis. Anaesthetic drugs injected into the subarachnoid space act on the lower spinal nerve roots and render the lower part of the body insensitive to pain. This procedure, called spinal anaesthesia, is frequently used for operations on the lower abdomen or on the lower extremities.

At some isolated sites in the walls of the third and fourth ventricles, there are patches of ependyma where the ependymal cells are tall, columnar, and ciliated, and possess special histochemical properties. These cells are called tanycytes. Some areas where these patches are found (in the human brain) are as follows.

(a)           The subcommissural organ is located over the dorsal wall of the aqueduct, just behind the posterior commissure.

(b)          The subfornical organ is present in relation to the roof of the third ventricle, just below the body of the fornix.

(c)           The intercolumnar tubercle or the organ vasculosum is present in relation to the anterior wall of the third ventricle (in the region where the columns of the fornix diverge).

(d)          In the floor of the fourth ventricle, the hypoglossal triangle is separated from the area postrema by a narrow ridge called the funiculus separans. This ridge, and the area postrema, are lined by tanycytes.

Similar areas have been identified at various other sites in other species.

The functions attributed to tanycytes are:

(c)           Transport of substances from CSF to underlying neurons or blood vessels.

The ventricles of the brain can be studied in living subjects by taking radiographs after injecting a radio-opaque dye into the ventricular system. The procedure is called ventriculography. Parts of the ventricles can also be seen using CT scans and magnetic resonanace imaging. 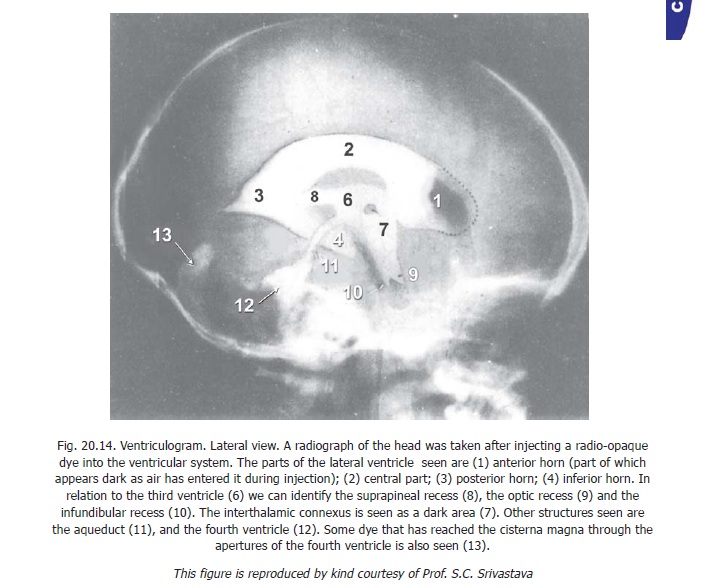