The Third Ventricle - Ventricles of the Brain

The third ventricle is the cavity of the diencephalon. It is a median cavity situated between the right and left thalami.

The third ventricle is the cavity of the diencephalon. It is a median cavity situated between the right and left thalami (Fig. 20.2). It communicates, on either side, with the lateral ventricle through the interventricular foramen (Figs. 20.1, 20.6). Posteriorly, it continues into the cerebral aqueduct which connects it to the fourth ventricle. The ventricle has two lateral walls, an anterior wall, a posterior wall, a floor and a roof. 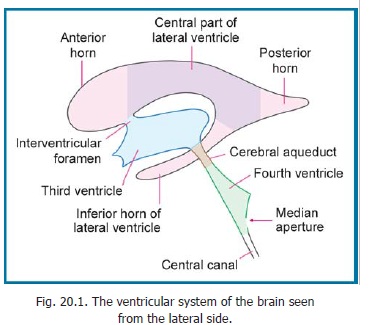 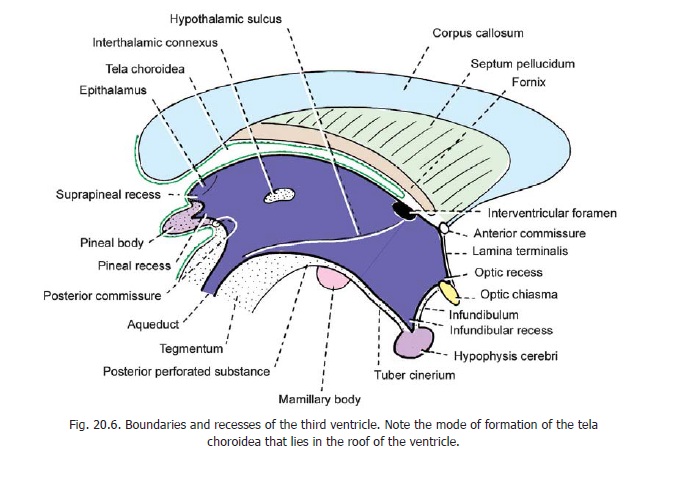 The anterior wall of the third ventricle is formed mainly by the lamina terminalis. Its upper part is formed by the anterior commissure, and by the columns of the fornix as they diverge from each other.

The floor is formed by the optic chiasma, the tuber cinereum and the infundibulum, the mamillary bodies, the posterior perforated substance and the tegmentum of the midbrain.

The roof of the ventricle is formed by the ependyma that stretches across the two thalami (Fig. 20.2). Above the ependyma there is the tela choroidea. Within the tela choroidea there are two plexuses of blood vessels (one on either side of the middle line) which bulge downwards into the cavity of the third ventricle. These are the choroid plexuses of the third ventricle  (Fig. 20.7). 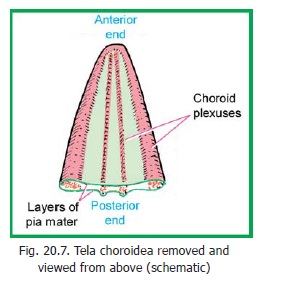 Tela Choroidea of the third and lateral ventricles

The tela choroidea is a double layered fold of pia mater that occupies the interval between the splenium of the corpus callosum and fornix, above, and the two thalami below. It is triangular in shape (Fig. 20.7). Its posterior end is broad and lies in the gap between the splenium (above) and the posterior part of the roof of the third ventricle (below) (Fig. 20.6). This gap is called the transverse fissure. The anterior end (representing theapex of the triangle) lies near the right and left interventricular foramina. The median part of the tela choroidea lies on the roof of the third ventricle. Its right and left lateral edges project into the central parts of the corresponding lateral ventricles (Fig. 20.2). When traced posteriorly, the two layers of pia mater forming the tela choroidea separate. The upper layer curves upwards over the posterior aspect of the splenium. The lower layer turns downwards over the pineal body and tectum (Fig. 20.6).

The choroid plexuses are highly vascular structures that are responsible for the formation of cerebrospinal fluid. The surface of each plexus is lined by a membrane formed by fusion of the ventricular ependyma with the pia mater of the tela choroidea. Deep to this membrane there is a plexus of blood vessels. Microscopic examination shows that the surface of the choroid plexus has numerous villous processes. Each process contains a plexus of capillaries that are connected to afferent and efferent vessels. Because of the presence of these processes the surface area of the choroid plexuses is considerable. It is further increased by the presence of microvilli (seen with the EM) present on the ependymal cells.