The Case of Culture-bound Syndromes and Idioms of Distress

Investigation of so-called culture-bound syndromes was geared for decades toward incorporation of these “exotic’’ categories into the Western nosologies.

The Case of Culture-bound Syndromes and Idioms of Distress

Investigation of so-called culture-bound syndromes was geared for decades toward incorporation of these “exotic’’ categories into the Western nosologies (Simons and Hughes 1985). The term “culture-bound’’ (Table 21.3) was used to describe a certain number of psychiatric disorders whose phenomenologies made them distinct from the Western categories and that theoretically could be singled out as unique to a particular cultural setting (Hughes et al., 1997). The clear implication was that the West-ern categories were not culture-bound but rather universal, and that proper characterization would disclose a translation key for specific nonWestern syndromes. However, these conditions have been studied more critically to understand instead the culture-bound nature of the Western classification schemes themselves and to enable the appropriate treatment of patients whose under-standings and presentation of illness conform to these indigenous categories (Good, 1994; Good and Delvecchio Good, 1982).

Contemporary cultural psychiatry recognizes that all clas-sification schemes are inherently cultural and subjects Western nosologies to the same kind of social analysis that it continues to apply to the indigenous nosologies (Lewis-Fernández and Kleinman, 1995). In this modern sense, “cultural-bound syn-drome’’ is an inherited and controversial term that is used in practice to describe psychiatric categories, whether they are part of the Western or nonWestern nosologies, on whose emergence, manifestation, or course culture is thought to exert a particu-larly strong influence (Hahn, 1985; Guarnaccia, 1993). The term continues to refer to relatively consistent illness categories with characteristic courses (“syndromes’’) and specific labels. 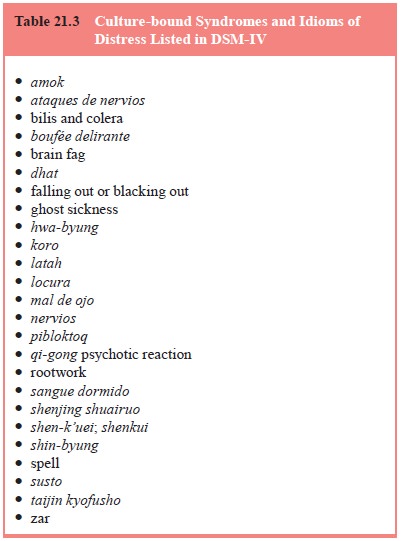 The organizing principle that unifies a syn-drome conceptually can be 1) a collection of symptoms, which can follow diverse classificatory schemes (descriptive); 2) a cause, including an immediate precipitating context (etiological); or 3) a response to treatment (Good and Delvecchio Good, 1982).

“Idiom of distress’’ is a newer term, which was coined to refer to a more general level of analysis (Nichter, 1981). Rather than denoting specific syndromes, the term refers to the more gen-eral illness “languages’’ of social groups, the culturally preferred ways of expressing distress, such as by somatic complaints, psy-chologizing explanations, possession or witchcraft terminology, oppositional or violent behavior illnesses due to “nerves’’, or at-tributions of inexplicable misfortune. In this sense, a given idiom of distress, such as somatization, can be expressed as multiple culture-bound syndromes such as ataques de nervios, neurasthe-nia, “brain fag’’, and so on. DSM-IV-TR presented a substantial list of culture-bound syndromes and idioms of distress in one of its appendices

Contemporary use of this terminology allows us to under-stand certain difficulties in the integration of the Western and nonWestern categories of psychiatric illness (Lewis-Fernández, 1992; Wig, 1983). First, the Western nosologies are based at present nearly exclusive on descriptive parameters. Wary of “the-oretical’’ causes, our current diagnostic system privileges a for-mal definition of psychopathological processes. Most indigenous nosologies, on the other hand, distinguish illness from normality at least as much on the basis of contextual characteristics as on descriptive ones. These include assessments regarding appropri-ateness of the symptom in the particular setting at the specific time in question, the relative sufficiency of precipitating stres-sors, and the nature and quality of the human relationships of the sufferer. These discrepancies between the organizing principles of the Western and nonWestern nosologies prevent an easy con-solidation of psychopathological criteria across cultures.

Secondly, nosologies also differ in the configurations of their phenomenologies (Kleinman, 1988; Weiss, 1996; Good and Delvecchio Good, 1982). The symptoms of many culture-bound syndromes, such as amok in Malaysia, or ataque de nervios in Puerto Rico, are composed of a variety of behavioral and experi-ential elements that are considered by the Western nosologists to belong to separate diagnostic categories. The characteristic pres-entations of these conditions exhibit diverse combinations of dis-sociative, psychotic, anxiety, depressive, characterological and somatic symptoms (Lewis-Fernández, 1992). Significant phe-nomenological variation occurs among individual cases, which are nevertheless unifying under a single nosological label.

These differences in definitions of illness and phenomeno-logical organization between the Western and nonWestern cat-egories ensure that the two nosologies are overlapping as global systems. From the psychiatric perspective, a cohort of individu-als identified by a cohort indigenous label will prove to be diag-nostically heterogeneous or even nonpathological. The obverse is that almost homogeneous psychiatric cohorts will appear locally verse. A nomographical, one-to-one relationship between the Western and nonWestern nosologies appears thus unattainable (Weiss, 1996). What is achievable is the systematic characteriza-tion of individual cases of persons suffering from culture-bound syndromes in terms of the Western categories of psychiatric illness, retaining at the same time an account of their distinct definitions of illness, idioms of distress, unique symptoms and other associated factors in the form of a cultural formulation 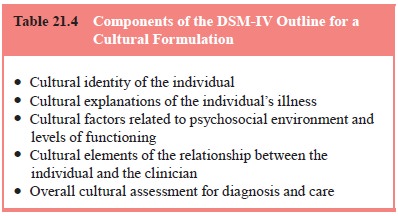 (Mezzich and Good, 1997) (Table 21.4). This iterative process of translation will result eventually in a comprehensive cultural psychiatry that integrates diverse local and professional classifi-cations of psychiatric illness with the goal of more effective com-munication and care of patients.

In spite of the importance of including culture-bound syn-dromes in the DSM-IV-TR, Guarnaccia and Rogler (1999) warn that important methodological issues remain unaddressed, since DSM-IV-TR does not include a system of norms to delimit the range of psychiatric disorders that relate to particular culture-bound syndromes, nor include these cultural conditions within the established disorder categories.