Sociocultural factors exert considerable influence over some aspects of substance use disorders and not others.

Sociocultural factors exert considerable influence over some as-pects of substance use disorders and not others. The prevalence rates of alcohol and drug abuse and dependence vary significantly across cultures. Lifetime rates for alcoholism, for example, range from 23% among the American Indians to 0.45% among the population of Shanghai (Helzer and Canino, 1992). Specific local factors that affect degree of risk for substance-related disorders include patterns of use, attitudes toward substance consumption, accessibility of the drug, physiological reactions to the same drug, and family norms and patterns (Westermeyer and Canino, 1997) (Table 21.1). Recent studies of teenagers find that different ethnic groups in the US experience different rates of substance abuse (Turner and Gill, 2002). Of even greater concern is the epide-miological finding that rates of alcohol and other substance abuse are higher among the US-born Mexican-Americans than among Mexico-born migrants, and increase with length of stay in the USA, indicating either a pathogenic impact of the US residence, a loss of protective social factors with migration, or both. These findings suggest that interventions should be tailored to the needs of different minority and immigrant populations, particularly as substance abuse has been related to other psychological disor-ders (Vega et al., 1998; Lee, 2001; Griffin et al., 2000). In part, these differences may be influenced by the way the local culture influences the definition of pathological substance use through differences in the perception of the impairment caused by high consumption and frequent intoxication (Osterberg, 1986). Par-ticular cultural views toward drinking in children, the value of moderation, the tolerance for intoxication, and the association of drinking with family activities and special social occasions appear to influence the degree of risk for alcoholism (Valliant, 1986). The availability of a substance also increases its rates of abuse and dependence (Helzer and Canino, 1992). Sociocultural factors such as religious proscriptions may exert their influence in this fashion. Heath (2001) has remarked on the long tradition of drug inhalation, from tobacco to hallucinogens, in tropical South America, which contradicts the perception in North America 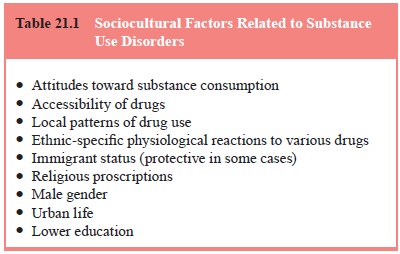 of drug inhalation as a novel, and therefore aberrant, trend (Kirmayer and Groleau, 2001).

Several aspects of substance use disorders appear to be less affected by cultural factors. Such aspects include the comorbid-ity patterns, the nature of dependence syndromes, the age at on-set, and the results of laboratory tests and physical examinations (Westermeyer, 1989). For example, alcoholism is associated in many societies with abuse of other substances, mania and antiso-cial personality as well as with depression and anxiety (Anthony and Helzer, 1991). Alcoholism and drug abuse are reliably more common among men, although the sex ratio can vary from 2:1 to 4:1 (Helzer and Canino, 1992; Robins et al., 1981). Drug abuse is also more prevalent among urban populations, the less edu-cated, and the young (Anthony and Helzer, 1991). The physical symptoms as well as the temporal relationship between onset of use and dependence are substance-specific and also fairly similar across cultures (Berger and Westermeyer, 1977).