Geographers are concerned about the earth and its various spheres.

The earth was formed 4.6 billion years ago. Geographers are concerned about the earth and its various spheres. These spheres did not exist on the primitive earth as they are today. They evolved over a long period of time after the earth was formed. There was no life on earth for a very long time. Scientists believe that the first life forms on earth came into existence about 3.5 billion years ago. Which marked, ‘The birth of the biosphere’.

In the last 100 years, man has had used, overused and misused the natural resources of the earth. This has disturbed the ecological balance of the earth. The realization about the damage caused to earth by our action came when we began to experience global warming, desertification, increase in disease and distress and recurrence of severe natural disasters.

It was in 1962 that Rachel Carson published the book ‘Silent Spring’ which inspired an environmental movement that led International agencies to focus their attention on protecting and sustaining the biosphere.

In 1971, UNESCO launched the Man and the Biosphere Programme to study our impact on nature and how it could be minimized. Even after several decades the programme still continues to shape the future of sustainability of the earth. 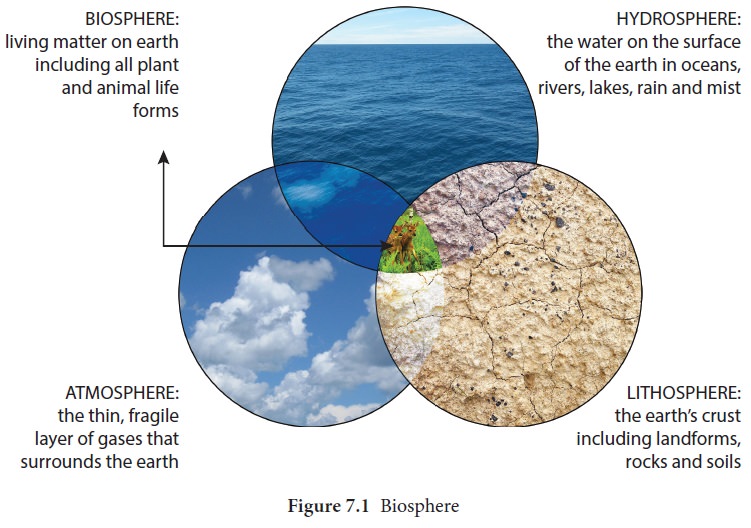 The word Biosphere originates from the Greek words bios = life and sphaira = sphere. Earth is the only planet in the solar system that supports life. There are many reasons that contribute to this and the most important being the earth’s distance from the sun, the presence of oxygen in the atmosphere and the presence of water.

The above factors, along with the existence and interaction of the three spheres of the earth (the lithosphere, hydrosphere and atmosphere) gives rise to the fourth sphere which is the life sphere or biosphere (Figure 7.1). The term Biosphere was coined by Eduard Suess in 1875. Later contributions to the study of biosphere were from, Charles Darwin and many other scientists.

Thus, in the biosphere, life exists on land, water and air and life forms range from microorganisms to plants, animals, birds, amphibians, reptiles and mammals including human beings.

The biosphere is formed of biotic components. It consists of organisms, population, community and ecosystem.