Rare, endangered or threatened plants and animals are elements of our natural heritage that are declining rapidly.

Rare, endangered or threatened plants and animals are elements of our natural heritage that are declining rapidly. If we cherish these species, like we do other rare and beautiful objects, these living organisms become treasures of the highest magnitude.

The International Union for the Conservation of Nature (IUCN) has identified and classified species based on the nature of their depleting numbers. The IUCN’s Red List of Threatened Species, identified in 1964, is the world’s most important inventory of the global conservation status of biological species.

Species are classified by the IUCN Red List into nine groups specified through criteria such as rate of decline, population size, area of geographic distribution, and degree of population and distribution fragmentation (Figure 7.11).

•       Extinct (EX) – The species has disappeared and no known individuals remaining

•        Extinct in the wild (EW) – Known only to survive in captivity, or as a naturalized population outside its historic range

•        Conservation dependent (cd) – This group has now merged with near threatened.

•        Data deficient (dd) – Not enough data to assess the risk of extinction of the species.

•        Not evaluated (ne) – Species not yet been evaluated against the criteria.

In the context of the IUCN Red List, ‘threatened’ embraces the three categories of Critically Endangered, Endangered, and Vulnerable.

According to the IUCN those species that have dwindled drastically are called as Critically Endangered and are included as Red List. Species that have disappeared are called as extinct species. In the Red List of 2012 that was released on 19 July 2012 at Rio+20 Earth Summit 19,817 species were threatened with extinction. 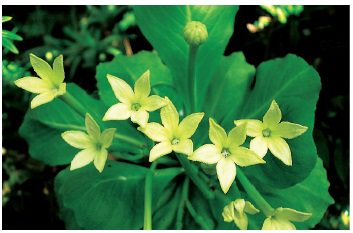 A Hawaiian plant species called Alula locally referred to as cabbage on a stick has moved from Critically Endangered to Extinct in the Wild. It is one of the 38 Red Listed Hawaiian plant species with less than five wild individuals remaining. It used to grow on the windy sea cliffs of Kauai. Alula was destroyed by hurricanes Iwa and Inki in 1982 and 1992 leaving only less than 10 plants alive. 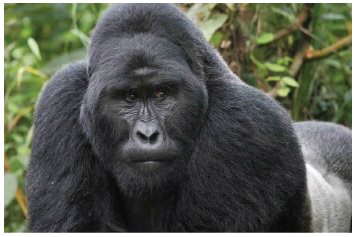 The majority of the great ape species are now Critically Endangered. The Eastern Gorilla the largest living primate is endemic to the Eastern Democratic Republic of Congo, south western Uganda and Rwanda. This species which was listed as Endangered has moved to Critically Endangered in 2016 due to an ongoing population decline. This decline is due to illegal hunting and destruction of forests for agriculture. If this trend continues, around 93% of Eastern Gorillas will be eliminated by 2054.

The Pygmy Hog: It is the smallest and rarest wild pig on earth and it is a Critically Endangered species previously spread across Bangladesh, Bhutan, India and Nepal. but now only found in Assam, India. In 1995, the Pygmy Hog Conservation Programme was started by Goutam Narayan of Ecosystems-India, with the help of the Assam government and now their numbers have increased to about 150. 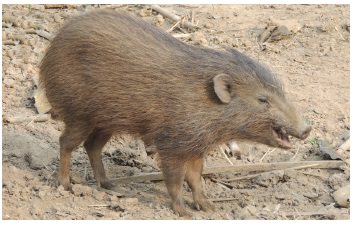 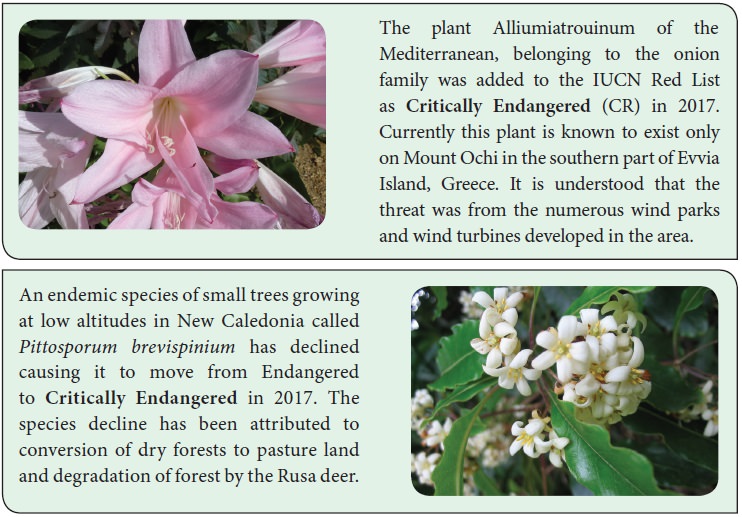 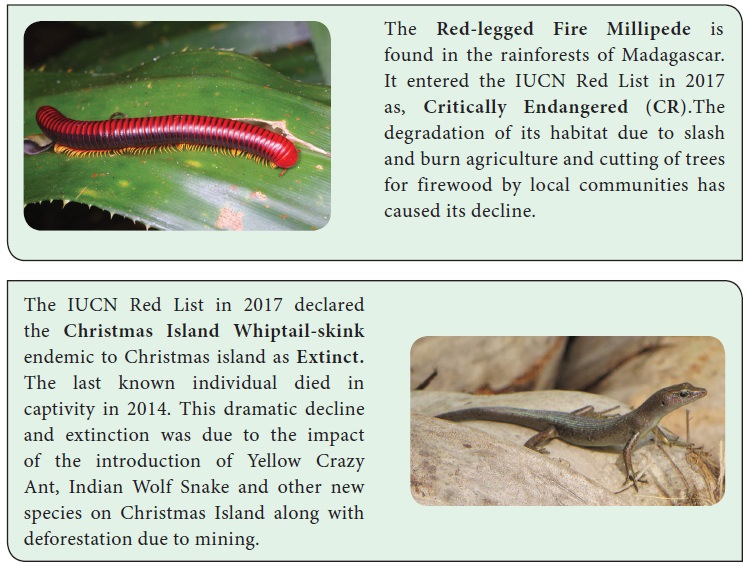 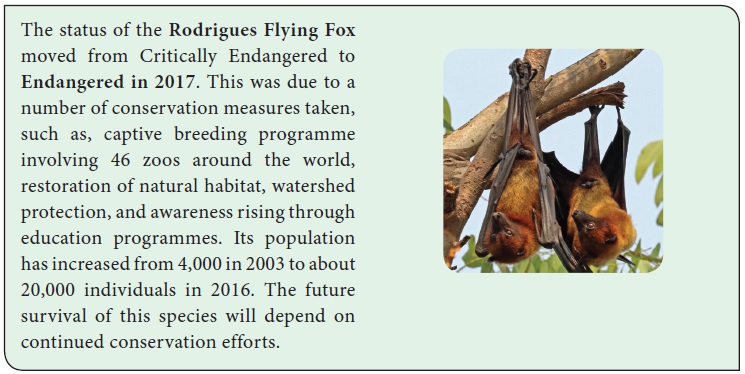 The plant Alliumiatrouinum of the Mediterranean, belonging to the onion family was added to the IUCN Red List as Critically Endangered (CR) in 2017. Currently this plant is known to exist only on Mount Ochi in the southern part of Evvia Island, Greece. It is understood that the threat was from the numerous wind parks and wind turbines developed in the area.

An endemic species of small trees growing at low altitudes in New Caledonia called Pittosporum brevispinium has declined causing it to move from Endangered to Critically Endangered in 2017. The species decline has been attributed to conversion of dry forests to pasture land and degradation of forest by the Rusa deer.

The Red-legged Fire Millipede is found in the rainforests of Madagascar. It entered the IUCN Red List in 2017 as, Critically Endangered (CR).The degradation of its habitat due to slash and burn agriculture and cutting of trees for firewood by local communities has caused its decline.

The IUCN Red List in 2017 declared the Christmas Island Whiptail-skink endemic to Christmas island as Extinct. The last known individual died in captivity in 2014. This dramatic decline and extinction was due to the impact of the introduction of Yellow Crazy Ant, Indian Wolf Snake and other new species on Christmas Island along with deforestation due to mining.

The status of the Rodrigues Flying Fox moved from Critically Endangered to Endangered in 2017. This was due to a number of conservation measures taken, such as, captive breeding programme involving 46 zoos around the world, restoration of natural habitat, watershed protection, and awareness rising through education programmes. Its population has increased from 4,000 in 2003 to about 20,000 individuals in 2016. The future survival of this species will depend on continued conservation efforts.

Causes of Extinction of Species

Extinction is defined as the permanent disappearance of an organism from the face of the earth. In other words, all members of a species have died. This means a loss of biodiversity. Extinction of species may take place (Figure 7.12) due to a variety of causes as given below:

•            Ecological substitution by other species of large carnivorous animals which compete for the same food resources.

•            Climatic change accelerates the competition between large mammals for shelter and food.

•            Extinction of weak species during the course of competition with more powerful and stronger species. 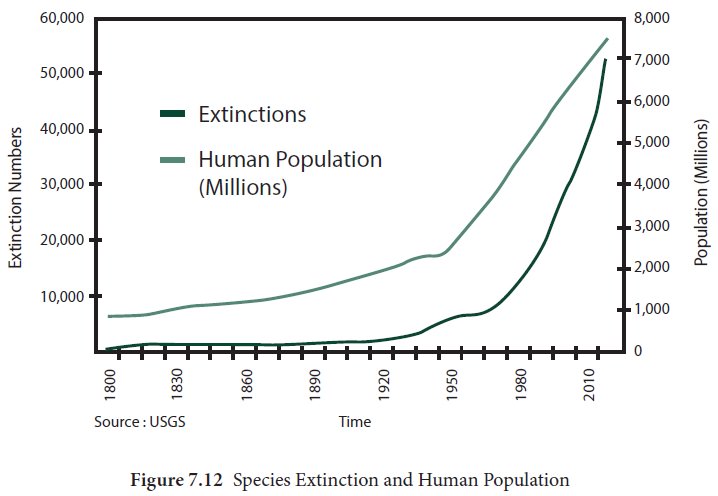 Between 1600 and 1900 it is estimated that one species went extinct every four years. In modern times, the rate is soaring. The graph below (Figure 7.12.) shows how the rate of extinction of species has increased over the past 50 years. This could be attributed to the rapid increase in population during the same period of time.

According to IUCN the rate of extinction of mammals and birds had started much earlier by 1700 itself at a much faster rate as shown in the graph below (Figure 7.13). 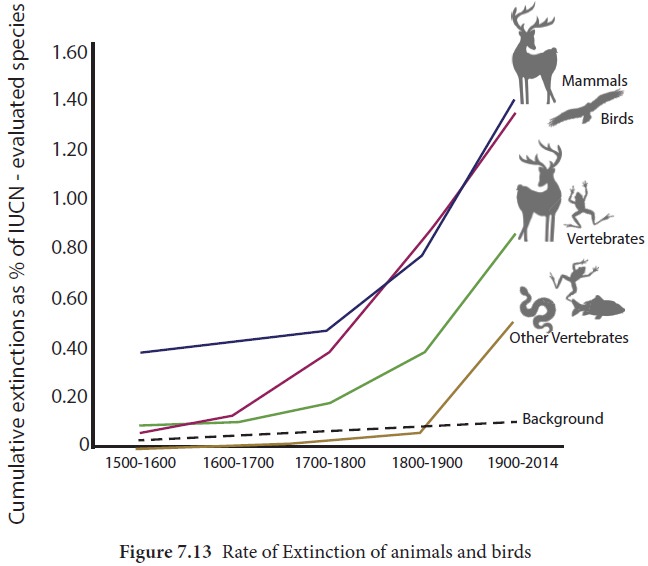 The following are some of the major threats to biodiversity:

a.        Habitat destruction and degradation

d.        Pollution of air, water and soil – Pollution can alter the growth and life of organisms in a great way. 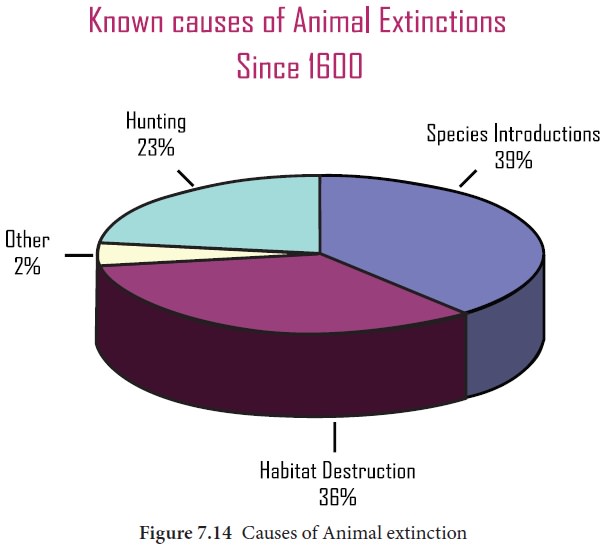 Despite rapid efforts in protecting terrestrial and marine habitats, world’s diversity of species is still dwindling. Since the 1960’s over 100,000 ‘protected areas’ have been established. This represents 11,265,408 sq.km of land and 1,609,344 sq.km of ocean. Yet, terrestrial and marine species have declined over the same period. This suggests that the common conservation strategy of protecting areas of land and sea is inadequate.