Biodiversity is the variability among living organisms.

The term biological diversity was used as early as 1968 by wildlife conservationist Raymond F. Dasmann. Latter in 1988, entomologist E.O. Wilson used the term Biodiversity and this term has been used since then. Biodiversity refers to the variety of life on Earth. This includes the number of species of plants, animals and microorganisms along with the diversity of genes in these species. Moreover, it embodies the different ecosystems on the planet, for example forests, deserts, coral reefs and wetlands.

Biodiversity is the variability among living organisms. This includes diversity within species, between species, and between ecosystems. The variety of biodiversity or the number of species in a given area is referred to as species richness. Normally variety of life increases with size of area.

Biodiversity can be identified at three levels:

b. Species diversity is the number of different species of plants and animals that are present in a region. A community with more number of species enjoys species richness. Naturally undisturbed forests have greater species richness than reforested areas or plantations.There are three types of Species:

•            Endemic species - is one whose habitat is restricted only to a particular area because of which it is often endangered. It differs from “indigenous,” or “native,” which although it occurs naturally in an area, is also found in other areas.

•            Exotic  Species - is any species intentionally or accidentally transported and released by man into an environment outside its original range. These are often the most severe agents of habitat alteration and degradation, and a major cause of the continuing loss of biological diversity throughout the world.

•            Cosmopolitan Species – It is a species that is found to be distributed over most regions of the earth example: cats, dogs, human beings. The killer whale is considered as the most cosmopolitan species in the world.

c. Ecosystem diversity refers to the variety of life forms in a prescribed ecosystem. Ecosystems may be both terrestrial and aquatic. Distinctive terrestrial ecosystems include forests, grasslands, deserts, etc. while aquatic ecosystems are rivers, lakes, oceans etc.

In understanding biodiversity, the most common question that arises in our mind is how many different plant and animal species are there on earth? There can be no definite answer to this question. At present the conservation scientists have identified over 8.7 million species worldwide. Of this only about 2 million are known to us ranging from microorganisms to giant mammals and reptiles. New species are being discovered while many species are also disappearing from the face of the earth.

The British biologist Norman Myers coined the term ‘biodiversity hotspot’ in 1988. According to him, a biodiversity hotspot is a biogeographic region characterised both by exceptional levels of plant endemism and by serious levels of habitat loss. Conservation International (CI) adopted Myers concept of ‘hotspots’ and it made an extensive global study of hotspots in 1999. According to CI, to qualify as a hotspot a region must meet two strict criteria: (i) It must contain at least 1,500 species of endemic plants, and (ii) It must have lost at least 70% of its original habitat. In 1999, CI’s book ‘Hotspots: Earth’s Biologically Richest and Most Endangered Terrestrial Ecoregions’, identified 34 biodiversity hotspots in the different countries of the world.

Currently there are 34 biodiversity hotspots that have been identified and, most of them occur in tropical forests (Figure 7.10). They represent just 2.3% of Earth’s land surface, but between them they contain around 50% of the world’s endemic plant species and 42% of all terrestrial vertebrates. 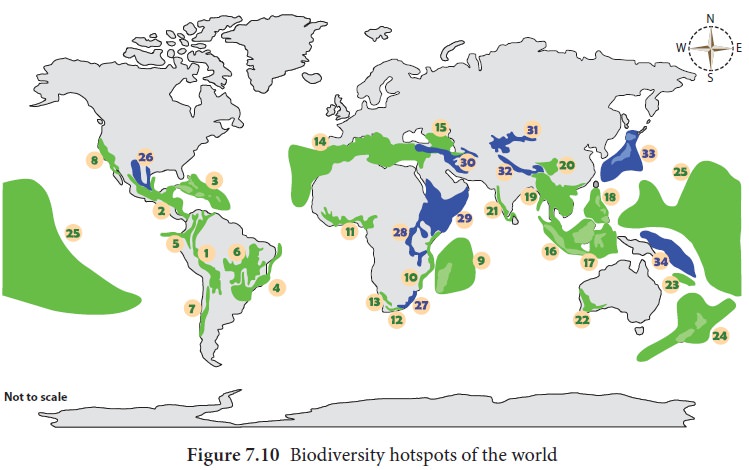 India has 4 biodiversity hotspots: the Western Ghats, the Himalayas, the Indo-Burma region and the Sundaland [includes Nicobar group of Islands].

Endemism is an ecological word meaning that a plant or animal lives only in a particular geographical location, such as a specific island, habitat type, country or any defined zone. For example, The Asiatic Lion of the Gir forest of Gujarat. The Kashmir Stag known as Hangul, which is found in the riverine forests of Kashmir Valley and Chamba in Himachal Pradesh. The Lion Tailed Macaque is India’s most threatened monkey which is endemic to the Western Ghats of South India. 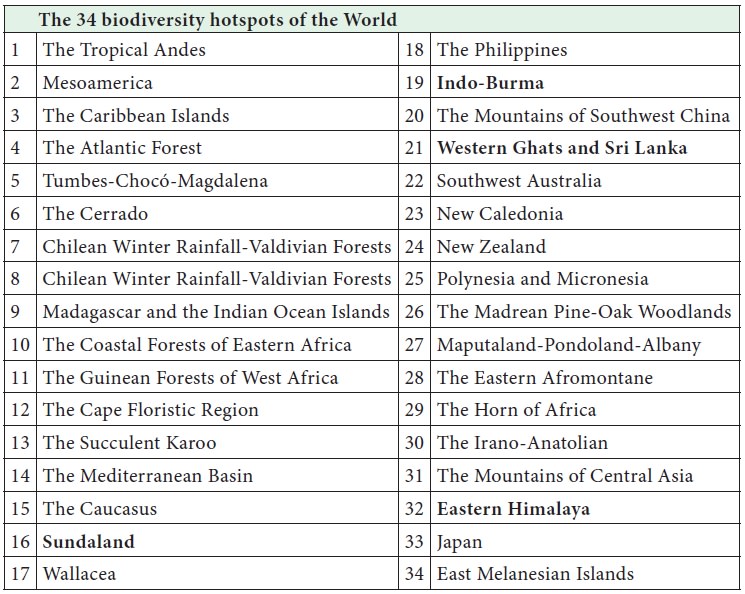