Ecosystem and Major components of an ecosystem

Population – is a group of similar plants or animals living in an area.

Community – refers to all the plants and animals living in an area.

Ecosystem – all living and non living things and their interaction within an area.

Life cannot exist in isolation. It flourishes in an environment which supplies and fulfills its material and energy requirements. A biotic community and its physical environment in which matter and energy flow and cycle is called as ecosystem.

The term ecosystem was first proposed by Arthur George Tansley in 1935. Tansley defined ecosystem as, ‘the system resulting from the integration of all living and non-living factors of the environment’. The ecosystems can vary in size. It can be very small, extending to about a few square centimeters or it can extend over many square kilometers. Example; tropical forests.

Major components of an ecosystem

The ecosystem is made up of two main components:

A. Abiotic Component: This component of the ecosystem includes the non-living substance of the environment. Example; light, air, soil, water, climate, minerals, etc. Sun is the main source of energy for the earth.

B. Biotic Component: This includes a variety of living organisms such as microorganisms, plants and animals. The biotic component of an ecosystem can be further divided into producers, consumers and decomposers based on their capacity to sustain themselves (Figure 7.2). 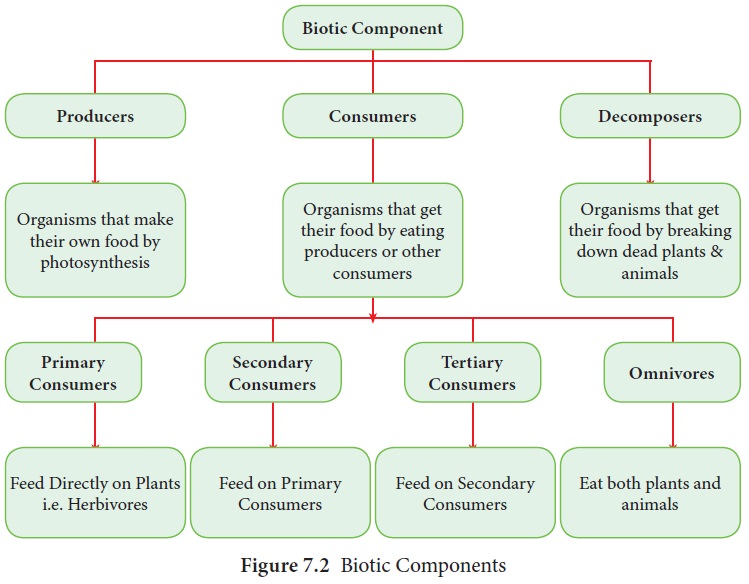 b. Consumers: Consumers are organisms that cannot manufacture their own food and get their food and nutrients from producers directly or from other organisms. They are called as ‘heterotrophs’ (hetero – others; trophs – nourshing).

Consumers can be divided into primary, secondary and tertiary consumers.

They are top predators in a food chain. They are carnivores at the topmost level in a food chain that feed on other carnivores or secondary consumers. Example: an owl eats a snake but an owl is eaten by a hawk, therefore a hawk is a tertiary consumer. Tertiary consumers that occupy the top trophic level, and are not predated by any other animals are called ‘apex predators’. However, when they die their bodies will be consumed by scavengers besides the decomposers Example; alligator andhawk.

Some organisms eat both plants and animals. These animals are called as‘omnivores. Example; cockroach, foxes, seagull and human.

Some omnivores are ‘scavengers’, which eat food that other animals have left behind Example; hyena and vultures.

Plants and animals that live on or inside other plants or animals are called as Parasites. Example; mistletoe lives on other plants. Other examples are tapeworms, round worms, lice, ticks, flea etc.

Every living creature in an ecosystem has a role to play. Without producers, the consumers and decomposers would not survive because they would have no food to eat.

All organisms of an ecosystem depend on one another for their survival. Each organism living in an ecosystem plays an important role in the flow of energy within the system. Organisms need energy for respiration, growth, locomotion, and reproduction. This movement of energy is usually understood through food chains or food webs. While a food chain shows one path along which energy can move through an ecosystem, food webs show all the overlapping ways that organisms live with and depend upon one another. 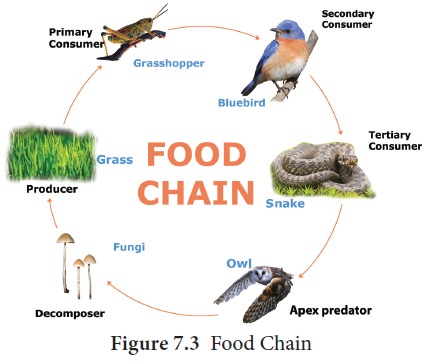 A Food Web is a complex network of interconnected food chains. Food chains show a direct transfer of energy between organisms.

A chain might involve a mouse eating some seeds on the forest floor, a snake eating the mouse and later an eagle eating the snake.

With each step, some of the energy from the sun, which is trapped within the seeds, is getting passed on. 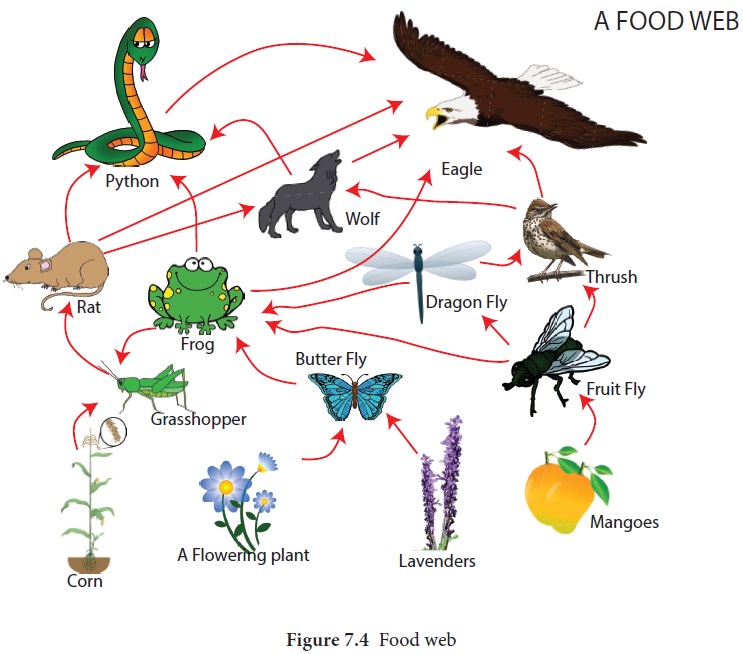 Food chains and food webs are found in both terrestrial and aquatic ecosystems.

Organisms in a food chain or food web are linked and dependent on one another for survival. If organisms in one trophic level become threatened, it impacts the organisms in other trophic levels. Primary consumers get less food due to loss or destruction of habitat.

The plant and animal species in such an environment could become endangered or even extinct. For this reason, it is vital that an ecosystem remains balanced containing an appropriate proportion of producers and consumers.

Energy Flow in an Ecosystem

Energy pyramids are another tool that ecologists use to understand the role of organisms within an ecosystem. As you can see, most of the energy in an ecosystem is available at the producer level. As you move up on the pyramid, the amount of available energy decreases significantly. It is estimated that only about 10% of the energy available at one trophic level gets transferred to the next level of the energy pyramid. The remaining 90 percent of energy is either utilized by the organisms within that level for respiration and other metabolic activities or lost to the environment as heat.

The energy pyramid shows how ecosystems naturally limit the number of each type of organism it can sustain (Figure 7.5). 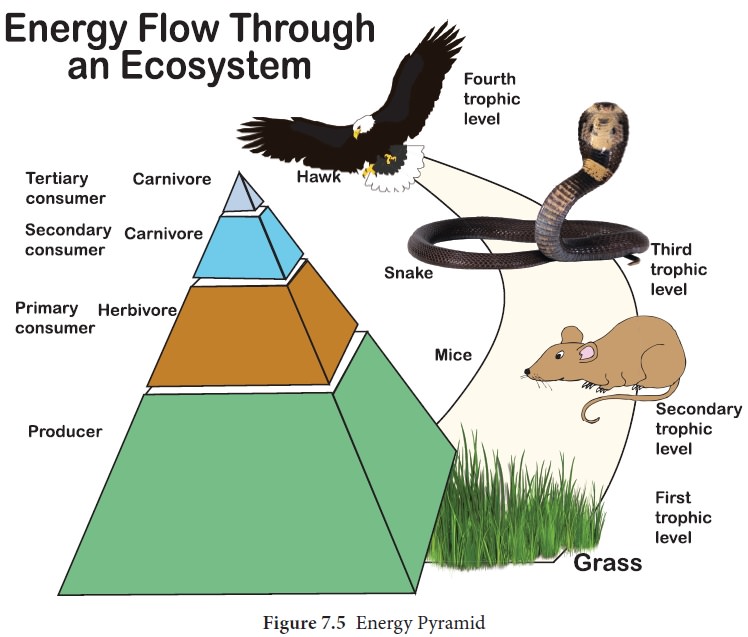 Cycles in an Ecosystem

Carbon is exchanged, or cycled among all the spheres of the earth. All living organisms are built of carbon compounds. It is the fundamental building block of life and an important component of many chemical processes. Living things need carbon to live, grow and reproduce. Carbon is a finite resource that cycles through the earth in many forms.

Carbon is an essential element in all organic compounds and since there is only a limited amount available it must be recycled continuously. This takes place in the biosphere. Atmospheric carbon is fixed in green plants through photosynthesis.

This carbon is passed on to other living organisms through the food chain. The carbon food compound is utilized and later released to the atmosphere through the process of respiration.

By-products of respiration are carbon-dioxide and water which are returned to the air.

A carbon cycle is completed by decomposers like bacteria and fungi which break down dead plants and animal tissues there by releasing some carbon to the air, water and soil.

All producers and consumers are not decomposed. The organic matter of some of them is preserved in fossil fuels such as coal and petroleum for millions of years.

In a carbon cycle (Figure 7.6), carbon moves between reservoirs. Carbon reservoirs include the atmosphere, the oceans, vegetation, rocks, and soil. 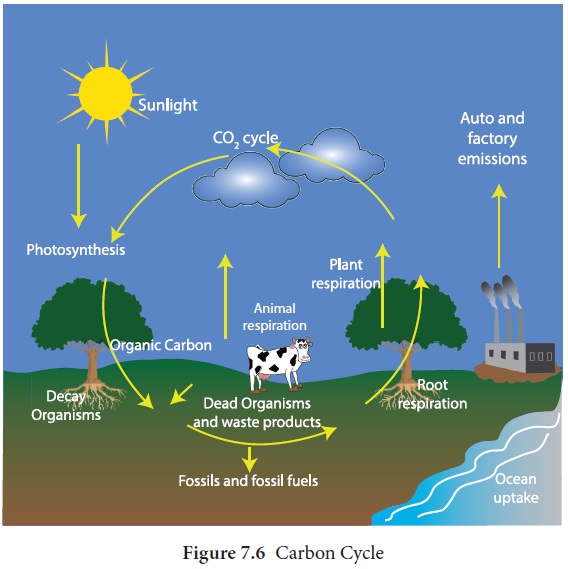