Chapter: Operations Research: An Introduction : Transportation Model and Its Variants

The Assignment Model and The Hungarian Method

The general assignment model with n workers and n jobs is represented in Table 5.31.

The element cij represents the cost of assigning worker i to job j (i, j = 1, 2, ... , n). There is no loss of generality in assuming that the number of workers always 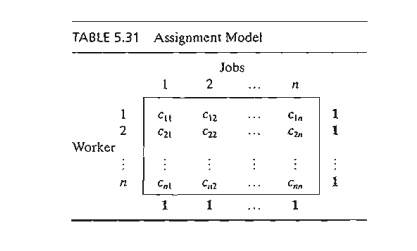 equals the number of jobs, because we can always add fictitious workers or fictitious jobs to satisfy this assumption.

We will use two examples to present the mechanics of the new algorithm. The next section provides a simplex-based explanation of the procedure.

Joe Klyne's three children, John, Karen, and Terri, want to earn some money to take care of personal expenses during a school trip to the local zoo. Mr. Klyne has chosen three chores for his children: mowing the lawn, painting the garage door, and washing the family cars. To avoid antic-ipated sibling competition, he asks them to submit (secret) bids for what they feel is fair pay for each of the three chores. The understanding is that aU three children will abide by their father's decision as to who gets which chore. Table 5.32 summarizes the bids received. Based on this information, how should Mr. Klyne assign the chores?

The assignment problem will be solved by the Hungarian method.

Step 1. For the original cost matrix, identify each row's minimum, and subtract it from all the entries of the row. .

Step 2. For the matrix resulting from step 1, identify each column's minimum, and subtract it from all the entries of the column.

Step 3. Identify the optimal solution as the feasible assignment associated with the zero ele-ments of the matrix obtained in step 2.

Let pi and qj be the minimum costs associated with row i and column j as defined in steps 1 and 2, respectively. The row minimums of step 1 are computed from the original cost matrix as shown in Table 5.33.

Next, subtract the row minimum from each respective row to obtain the reduced matrix in Table 5.34.

The application of step 2 yields the column minimums in Table 5.34. Subtracting these values from the respective columns, we get the reduced matrix in Table 5.35. 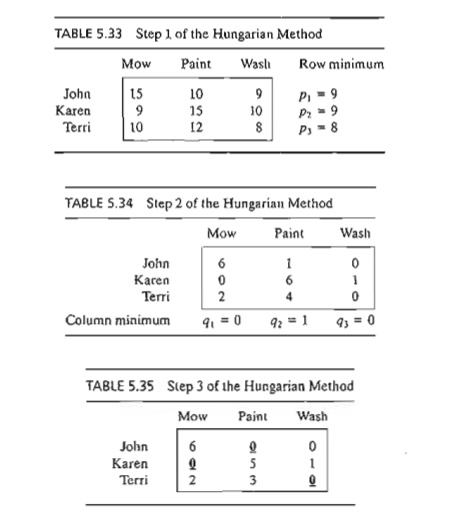 The given steps of the Hungarian method work well in the preceding example because the zero entries in the final matrix happen to produce a feasible assignment (in the sense that each child is assigned a distinct chore). In some cases, the zeros created by steps 1 and 2 may not yield a feasible solution directly, and further steps are needed to find the optimal (feasible) assignment. The following example demonstrates this situation.

Suppose that the situation discussed in Example 5.4-1 is extended to four children and four chores. Table 5.36 summarizes the cost elements of the problem.

The locations of the zero entries do not allow assigning unique chores to all the children. For example, if we assign child 1 to chore 1, then column 1 will be eliminated, and child 3 will not have a zero entry in the remaining three columns. This obstacle can be accounted for by adding the following step to the procedure outlined in Example 5.4-1:

Step 2a. If no feasible assignment (with all zero entries) can be secured from steps 1 and 2,

(i) Draw the minimum number of horizontal and vertical lines in the last reduced matrix that will cover all the zero entries. 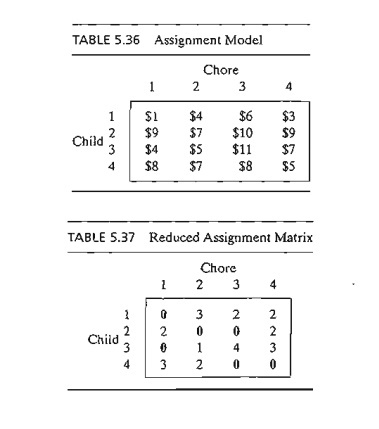 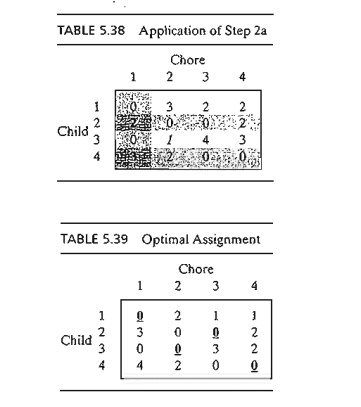 (iii) If no feasible assignment can be found among the resulting zero entries, repeat step 2a. Otherwise, go to step 3 to determine the optimal assignment.

The application of step 2a to the last matrix produces the shaded cells in Table 5.38. The smallest unshaded entry (shown in italics) equals 1. 111is entry is added to the bold intersection cells and subtracted from the remaining shaded cells to produce the matrix in Table 5.39.

File amplEx5.4-2.txt provides the AMPL model for the assignment model. The model is very similar to that of the transportation model.

a. Solve by the Hungarian method.

b. TORA Experiment. Express the problem as an LP and solve it with TORA.

c. TORA Experiment. Use TORA to solve the problem as a transportation model.

2. JoShop needs to assign 4 jobs to 4 workers. The cost of performing a job is a function of the skills of the workers. Table 5.41 summarizes the cost of the assignments. Worker 1 cannot do job 3 and worker 3 cannot do job 4. Determine the optimal assignment using the Hungarian method.

3. In the JoShop model of Problem 2, suppose that an additional (fifth) worker becomes available for performing the four jobs at the respective costs of $60, $45, $30, and $80. Is it economical to replace one of the current four workers with the new one?

4.In the model of Problem 2, suppose that JoShop has just received a fifth job and that the respective costs of performing it by the four current workers are $20, $10, $20, and $80. Should the new job take priority over any of the four jobs JoShop already has?

*5. A business executive must make the four round trips listed in Table 5.42 between the head office in Dallas and a branch office in Atlanta.

The price of a round-trip ticket from Dallas is $400. A discount of 25% is granted if the dates of arrival and departure of a ticket span a weekend (Saturday and Sunday). If the stay in Atlanta lasts more than 21 days, the discount is increased to 30%. A one-way

ticket between Dallas and Atlanta (either direction) costs $250. How should the execu-tive purchase the tickets?

*6. Figure 5.6 gives a schematic layout of a machine shop with its existing work centers des-ignated by squares 1,2,3, and 4. Four new work centers, I, II, III, and IV, are to be added to the shop at the locations designated by circles a, b, c, and d. The objective is to assign the new centers to the proposed locations to minimize the total materials handling traf-fic between the existing centers and the proposed ones. Table 5.43 summarizes the frequency of trips between the new centers and the old ones. Materials handling equip-ment travels along the rectangular aisles intersecting at the locations of the centers. For example, the one-way travel distance (in meters) between center 1 and location b is 30 + 20 = 50 m. 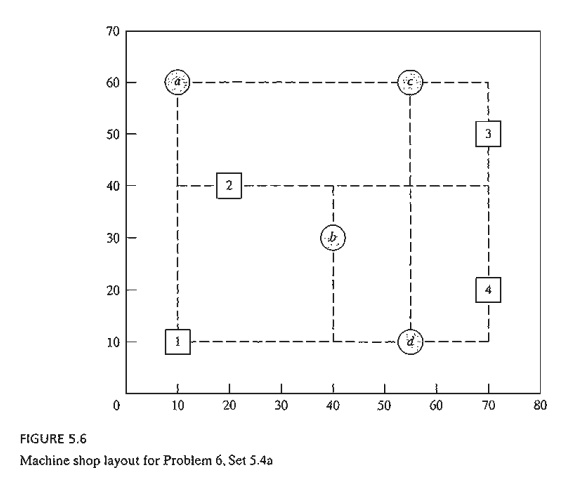 7. In the Industrial Engineering Department at the University of Arkansas, INEG 4904 is a capstone design course intended to allow teams of students to apply the knowledge and skills learned .in the undergraduate curriculum to a practical problem. The members of each team select a project manager, identify an appropriate scope for their project, write and present a proposal, perform necessary tasks for meeting the project objectives, and write and present a final report. The course instructor identifies potential projects and provides appropriate information sheets for each, including contact at the sponsoring or-ganization, project summary, and potential skills needed to complete the project. Each design team is required to submit a report justifying the selection of team members and the team manager. The report also provides a ranking for each project in order of prefer-ence, including justification regarding proper matching of the team's skills with the pro-ject objectives. In a specific semester, the following projects were identified: Boeing F-lS, Boeing F-18, Boeing Simulation, Cargil, Cobb-Vantress, ConAgra, Cooper, DaySpring (layout), DaySpring (material handling), IB. Hunt, Raytheon, Tyson South, Tyson East, Wal-Mart, and Yellow Transportation. The projects for Boeing and Raytheon require U.S. citizenship of all team members. Of the eleven design teams available for this semester, four do not meet this requirement.

Devise a procedure for assigning projects to teams and justify the arguments you use to reach a decision.

2. Simplex Explanation of the Hungarian Method

The assignment problem in which n workers are assigned to n jobs can be represented as an LP model in the following manner: Let cij be the cost of assigning worker i to job j, and define 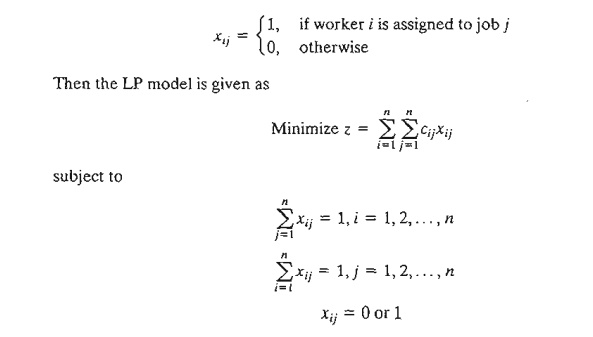 The optimal solution of the preceding LP model remains unchanged if a constant is added to or subtracted from any row or column of the cost matrix (cij). To prove this point, let pi and qj be constants subtracted from row i and column j. Thus, the cost element cij is changed to

Because the new objective function differs from the original one by a constant, the optimum values of xij must be the same in both cases. The development thus shows that steps 1 and 2 of the Hungarian method, which call for subtracting pi from row i and then subtracting qj from column j, produce an equivalent assignment model. In this regard, if a feasible solution can be found among the zero entries of the cost matrix created by steps 1 and 2, then it must be optimum because the cost in the modified matrix cannot be less than zero.

If the created zero entries cannot yield a feasible solution (as Example 5.4-2 demonstrates), then step 2a (dealing with the covering of the zero entries) must be ap-plied. The validity of this procedure is again rooted in the simplex method of linear programming and can be explained by duality theory (Chapter 4) and the complementary slackness theorem (Chapter 7). We will not present the details of the proof here because they are somewhat involved.