Another group of activators of the complement system includes many types of aggregated (hydrophobic) proteins, artificially aggregated immunoglobulins of all classes and sub-classes (including IgG4, IgA, and IgE), microbial membranes, and cell walls (see Table 9.1). These activators affect the complement sequence via a mechanism termed the “alter-native pathway.” The alternative pathway received this designation because its activation does not absolutely require antibody and can proceed in the absence of C1, C4, and C2, all essential for the classical pathway of complement activation. 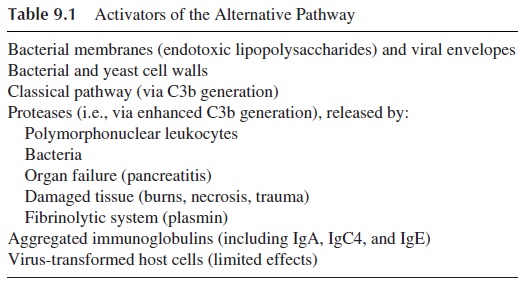 Some of the most significant activators of the alternative pathway are the bacterial membrane lipopolysaccharides characteristic of gram-negative bacteria and the peptido-glycans and teichoic acids from the cell walls of certain gram-positive bacteria. These sub-stances fix to their surfaces a group of several plasma glycoproteins, including C3b, Factor B, Factor D, and properdin, which constitute the initial portion of the alternative pathway sequence. The generation of a “protected” (i.e., nondegraded and stable) bound form of C3b must first occur in order for the alternative complement pathway/amplification loop to be initiated. So the alternative pathway begins with at least one stable C3b covalently bound to the activator/antigen and ends with the cleavage of many additional C3 molecules to form more bound C3b and fluid phase C3a. It is important to understand that as a part of the classical pathway, the amplification loop rapidly utilizes the abundant levels of C3 to completely coat the foreign surface and change its very nature due to the covalent binding of C3b.

A. Sequence of Activation of the Alternative Pathway/Amplification Loop

C3b fragments are formed slowly during normal C3 turnover in blood but faster whenever complement is activated by any of the known pathways. Once formed, C3b has an oppor-tunity to bind via its short-lived labile binding site to the nearest surface. By definition, if the surface is an activator of the alternative pathway, then C3b upon binding to the sub-stance will not be rapidly inactivated by natural inhibitory systems and will survive on the activating surface long enough to bind to serum Factor B forming a C3bB complex.

The interaction between deposited C3b and Factor B is stabilized by Mg2+ , which is the only ion required for functional activation of the alternative pathway (Table 9.2). There-fore, tests to discriminate between the two complement activation pathways are often based on the selective chelation of Ca2+ (to disrupt C1q, C1r2, and C1s2) and the addition of suf-ficient Mg2+ to allow activation of the alternative pathway.

Factor B, within the C3bB complex, is specifically activated by a circulating active plasma enzyme, Factor D, to yield activated C3bBb. C3bBb is an important C3 convertase, which (like C4b2a) activates C3, leading to the formation C3bnBb, which in turn is capa-ble of activating more C3 as well as C5 and the membrane attack complex. C3bnBb is sta-bilized by properdin, a plasma glycoprotein that binds to C3b. Since Factor D has never been isolated in its proenzyme form, it is generally believed to be activated immediately upon leaving the adipose tissues where it is synthesized. The most important point is the tremendous C3 amplification step that occurs in regard to C3b deposition and C3a forma-tion. Every time a new C3b is deposited on the activating substance, there is a chance to form a new C3bBb enzyme capable of activating more C3, causing more C3b deposition. Likewise, amplified C3a and C5a production leads to enhanced neutrophil chemotaxis and edema.

It must be kept in mind that the nature of the surface to which the C3b binds regu-lates to a great extent C3b survival time. It is the absence of a C3b degradation system on the surface to which C3b is bound that “allows” bound C3b to remain intact, and, conse-quently, the alternative pathway is activated. If C3b binds to a surface or a molecule that does not support activation of the alternative pathway, then C3b is rapidly inactivated by Factor I acting in concert with several cofactors, such as CR1 and membrane cofactor pro-tein on host cell membranes or Factor H in plasma.

CR1 and/or membrane cofactor protein are found on the surface of most host cells. These cofactors are most effective in binding and regulating C3b, which inadvertently binds to bystander host cells. Factor H appears to be primarily responsible for inactivating fluid phase C3b. However, Factor H binds to C3b molecules accidentally deposited on host sialic acid–rich tissue surfaces and therein serves as a cofactor for Factor I.

B. Biological Significance of the Alternative Complement Pathway

The biological significance of the alternative pathway can be understood if we consider, as an example, an infection with a hypothetical bacterium. Since all normal individuals have low levels of antibody to most bacteria, some limited classical pathway activation occurs. Theoretically, in the presence of large numbers of bacteria, the relatively low levels of spe-cific antibody may be effectively absorbed by antigens present on the proliferating bacteria, allowing uncoated bacteria to escape destruction by the more effective classical pathway.

While optimal classical pathway function is awaiting production of large amounts of specific antibody, C3b molecules (produced via normal C3 turnover) are slowly deposited on the bacteria, initiating the alternative complement sequence. Most bacteria, fungi, and viruses will activate the alternative pathway, but with varying efficiencies. That is, there is a large variability in the avidity and degree of the interaction with this pathway, depending on the species and strain of microorganism. Perhaps aiding the activation of the alternative pathway are the proteolytic enzymes being produced by microorganisms, which directly activate components like C3. If a higher rate of C3 conversion to C3b and C3a occurs near the membrane of the organism, C3b molecules will more rapidly deposit on the foreign sur-face via their highly reactive C3b-binding site, and the alternative complement pathway will be more effectively initiated. On the other hand, large levels of powerful broad-spec-trum proteases located on bacterial surfaces could protect the bacteria from the effects of complement by simply degrading the complement components as they deposit.