CR1 (complement receptor 1) is a common membrane glycoprotein that can be detected on almost all types of human cells including erythrocytes and cells from various tissues and organs.

CR1 (complement receptor 1) is a common membrane glycoprotein that can be detected on almost all types of human cells including erythrocytes and cells from various tissues and organs (Table 9.3). CR1 reacts with C3b until C3b becomes cleaved by Factor I. In phago-cytic cell membranes, the main biological role of CR1 is to enhance the phagocytosis of those antigenic substances to which C3b is covalently bound. Also, cell surface CR1 molecules protect the cells on which they are expressed from complement-mediated by-stander damage. CR1 molecules move on the cell surface to quickly bind any nearby C3b inadvertently deposited on host cells and act as a cofactor for the serum Factor I enzyme, which cleaves C3b to form inactive C3b (iC3b), and thereby prevent further activation of the complement sequence. 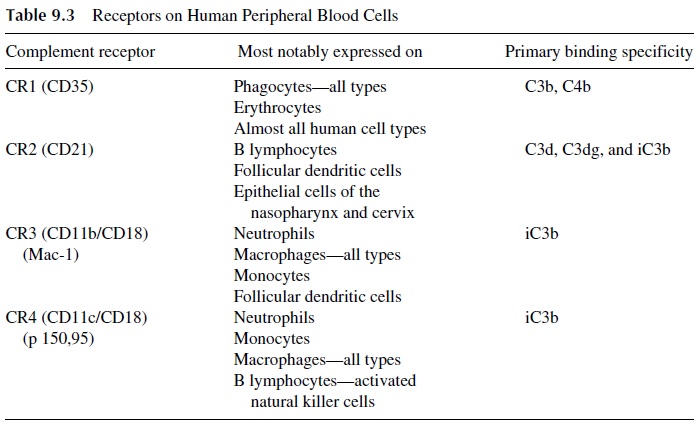 CR1 on erythrocytes effectively removes inflammatory complement-coated particles from the fluid phase of the blood. This removal reduces the probability that the inflamma-tory complement-coated immune complexes will disturb vital organs and tissues. The ubiq-uitous presence of CR1 not only protects most host cells from inadvertent complement-me-diated membrane attack but also sequesters the complement-coated antigens, preventing deeper penetration of these inflammatory complexes into those tissues and vital organs while awaiting the arrival of phagocytes. It is important to understand that the site on C3b, which binds to the CR1 receptor on erythrocytes and other host cells, is lost as iC3b is formed. Therefore, a selective binding to phagocytes increases. Thus erythrocytes provide an important transporting function by “presenting” complement-coated immune complexes to the various phagocytic systems present in the host (e.g., spleen and liver).

CR2 (complement receptor 2) is another important cell surface glycoprotein that has primary binding specificity for a molecular site on the alpha chain of C3, exposed on C3d, C3dg, and on iC3b. B lymphocytes have both CR2 and CR1 molecules on their surface. Follicular dendritic cells (important in antigen presentation) have CR2, CR3, and CR1 on their surface. Antibody production is greatly enhanced by complement-coated antigens, which stimulate B cells via their CR2 and CR1. In animal models, when C3d was chemi-cally linked to an antigen and added to specific B cells in vivo, a thousandfold enhancement of antibody production occurred. The CR2 not only stimulates the B cell directly but also associates with CD19 (another B-cell membrane protein that is known to greatly stimulate antibody production). Of course, the complement synergistic effect on B cells occurs only in the presence of specific antigen (and with helper T cells).

CR3 (Complement Receptor 3) is a cell surface glycoprotein which, via Ca2+ -de-pendent interactions, binds to site(s) exposed predominantly on iC3b; this CR3 receptor is expressed on neutrophils, monocytes/macrophages, certain natural killer (NK) cells, and on a low proportion of B and T lymphocytes.

CR4 (Complement Receptor 4) is expressed mainly in neutrophils, monocytes, and tissue macrophages. Like CR3, it binds to iC3b that remains irreversibly bound to the anti-genic surface.

In addition to the CR1, CR2, CR3, and CR4 glycoproteins, certain host cells also have receptors for C3a and C5a. For example, neutrophils, mast cells, basophils, and cer-tain lymphocyte populations have receptors for C3a and C5a. The binding of C3a and/or C5a to these receptors stimulates several cellular functions, such as release of active medi-ators, upregulation of CR1 and CR2 receptors, leading to enhanced phagocytosis, upregu-lation of CAMs that contributes to their extravascular migration, etc.

Besides the role in B-cell activation mentioned above, complement receptors medi-ate the stimulation of many cell types that express them. Antigens coated with antibody and complement (i.e., C4b, C3b, iC3b, and C3dg) adhere strongly to macrophages, neutrophils, and lymphocytes (B lymphocytes and activated T lymphocytes) and cause them to release many biologically active factors, including a variety of soluble mediators (such as cy-tokines, interleukins, prostaglandins, and leukotrienes), which influence immune responses and cause inflammation.