Chapter: Biology: Natural Diversities of Bangladesh-Distribution of Plants and Animals

Tertiary hilly region : The hilly regions of north-eastern and south-easternpart of Bangladesh have originated during the elevation of the Himalayans in Tertiary period.

Tertiary hilly region : The hilly regions of north-eastern and south-easternpart of Bangladesh have originated during the elevation of the Himalayans in Tertiary period. They are similar to Lusai of Asam and Arakan hills of Mayanmar. These hills are situated in greater Sylhet, Chittagong and Chittagong Hill Tracts.

A. Hills of Sylhet : In Moulavibazar, Habiganj and north-eastern part of Sylhetthere are hills or hillock covered with grassland and trees. Usually these are situated at 30 -60 meter (100 -200 feet) above sea level. In these hills tea cultivated. The highest hill of Sylhet region is the Patharia Hill. Its height is 240 meters (800 feet).

B. Hills of Chittagong : In the northern region of Chittagong there are somesmall hills situated parallal with the seashore and are extended north to south The hills of Sitakunda and Chandranath are one of them. The highest peak here is 350 meters (1155 feet). In the south there are some small hilly range in between Cox's Bazar and Teknaf.

C. Hills of Chittagong Hill Tracts: There are many hills in the hilly district ofRangamati, Bandarban and Khagrachhari. These hills are extended from north to south. Normal height of these hills is not more than 600 meters (200 feet). Among the hills of Chittagong Hill Tracts the highest one is Tajingdong (Bijoy), which is 1231 meters (4039 feet) in height. Other high hills are: Moudok Muyal -about 1000 meters (3292 feet), Reng Tiyang -about 920 meters (3141 feet), and Pyramid hill -about 920 meter (3016 feet).

Environmental Characteristics: Hilly lands are elevated with heavy rainfalland it rains almost throughout the year. Air in this region is saturated with humidity. In Sylhet region the amount of rainfall is more than 5000 m.m. in a year, in Chittagong -about 3000 m.m. and in Chittagong Hill Tracts to 2500-2750 m.m.

Plants: Presence of forest is the characteristic features of hilly region. In theseforests there grow various types of plants - climbers, bushes, bamboos, canes and grasses. Formerly this region was covered with dense forests. But due to overgrowth of population and collection of forest resources in excess these forests are decreasing gradually.

The management of forest department causes the damage of most of the forest area. In natural forest there grow many species of plant. But for the production of more valuable timber, in many regions the naturally growing plants are being cut down and many trees of a single species have been planted. This is called monoculture. This type of forest is called Plantation Forest. In these forests valuable species of plant like Teak, Gamar, Rubber etc are planted, thus the diversity of plants in this forest is much lesser.

For Predominance of certain species, forests are given various names. Such as in cane forest mainly canes are grown. In the similar way in bamboo forest various types of bamboos are grown. Teak and Gamar are already

mentioned. Besides. in many treeless hills there grows different types of grasses, particularly Chhon grass (Imperata cylindrica) are grown. These are called Chhon forest. 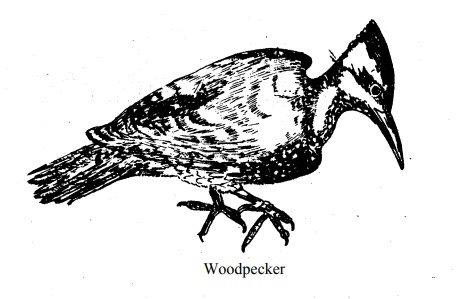 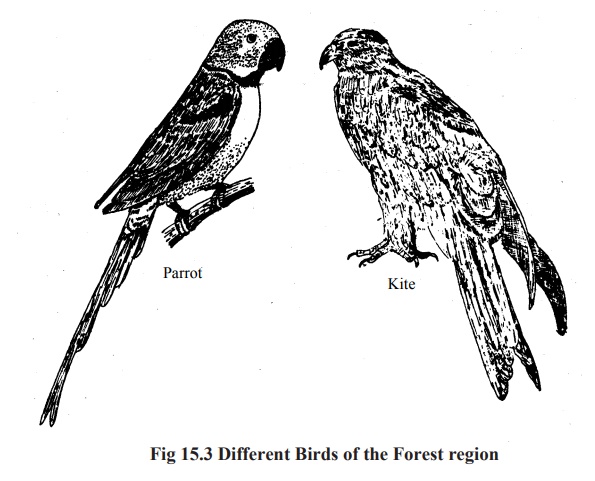 in Bangladesh the hily forests are of two types :

1. Tropical Evergreen Forest: In these forests the large trees do not shed theirleaves in winter as the Shaal forest do. Thus their canopy or tops of the trees look evergreen throughout the whole year.

Height of the trees of this forest is not equal. As a result their tops are seems to be arranged in 2/3 strata or layers. The tallest trees are up to 60 meters (200 feet) in height, e.g. Garjan, Chapalish, Civit. Telgu etc. They are said to be the first layer trees. Trees having a medium height make the second layer, e.g. Chikrashi and Gamar. Trees of the third layer are shorter than those of the second layer, e.g. Jarul, Uriaam (Mangifera longipes) etc.

Forest region of Sylhet: They are a combination of tropical evergreen andmixed evergreen type. Among the first layer trees, Chapalish, Deowa, Chamrata, Aamra, Padak and Banchalta are prominent. In the second layer Bhuikadam, Champa, Panidumur, Bandarhola, Chikrashi and Gamar are prominent. Among bamboos Muli, Khang, Parua are notable. There are some Garjan in Patharia region. In some areas some Teak, Ironwood, Malacca and Koroi have been planted. A large number of orchids, various types of Colocasia, ferns and epiphytes are found to grow in the forests of Sylhet. Canes also grow in Sylhet forest.

Forest of Chittagong Hill Tracts comprises of evergreen, mixed evergreen, deciduous, canes and bamboo forests. The major plants of this region are Civit, Garjan, Chandul, Nageshwar, Batna, Taali, Pitraj, Punail, Koroi, Gamar, Vadi Bandarhola, Chapalish, Udal, Aamra, Shilvadi, etc.Among these Gamar Koroi Vadi, Shilvadi, Udal and Aamra are deciduous tree. Bamboo and Chhon forests are in abundance in this region. Canes are also available. There are many Teak but they are all planted.

Sylhet Region: Among the mammals monkey and entellus (Honuman) areprominent. Besides these there are various kinds of birds.

Chittagong Region: Notable animals of this region are elephant, leopard, deer,gibbon and different kinds of snakes and birds.

Chittagong Hill Tracts: Amphibians like tree frog, toad, python, cobra,monitor lizard are found in the forests. Among mammals big rat, bat, monkey, entellus, leopard, gibbon, bear, elephant, gaur are found to live here. Elephant is the largest mammal amongst the terrestrial animals. In forest, birds like Moutusi, Doyel (Copsychus saularis) [the national bird of Bangladesh], parrot, woodpecker and some others. 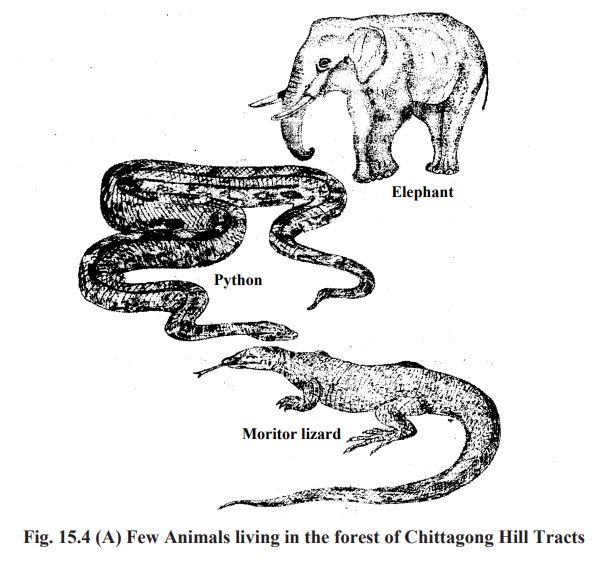