A Bimetallic thermostat consists of two different metal strips bounded together and they cannot move relative to each other.

These metals have different coefficients of expansion and when the temperature changes the composite strips bends into a curved strip, with the higher coefficient metal on the outside of the curve.

The basic principle in this is all metals try to change their physical dimensions at different rates when subjected to same change in temperature.

This deformation may be used as a temperature- controlled switch, as in the simple thermostat.

The resistance of most metals increases over a limited temperature range and the relationship between Resistance and Temperature is shown below.

The platinum, nickel and copper in the form wire are the most commonly used materials in the RTDs.

glass adhesive inside a ceramic tube.

Thermistor is a semiconductor device that has a negative temperature coefficient of resistance in contrast to positive coefficient displayed by most metals.

Thermistors are small pieces of material made from mixtures of metal oxides, such as Iron, cobalt, chromium, Nickel, and Manganese.

The shape of the materials is in terms of discs, beads and rods.

The thermistor is an extremely sensitive device because its resistance changes rapidly with temperature.

The resistance of conventional metal-oxide thermistors decreases in a very non-linear manner with an increase in temperature.

The change in resistance per degree change in temperature is considerably larger than that which occurs with metals.

Where Rt, is the resistance at temperature t, with K and β being constant. Thermistors have many advantages when compared with other temperature sensors.

The simple series circuit for measurement of temperature using a thermistor and the variation of resistance with temperature for a typical thermistor.

The thermistor is an extremely sensitive device because its resistance changes rapidly with temperature.

Thermocouples are based on the See back Effect.

The thermocouple temperature measurement is based on a creation of an electromotiveforce (emf).

"When two dissimilar metals are joined together an e.m.f will exist between the two points A and B, which is primarily a function of the junction temperature. The above said

to be principle is See back effect..

The thermocouple consist of one hot junction and one cold junction

Hot junction is inserted where temperature is measured

Cold junction is maintained at a constant reference temperature. 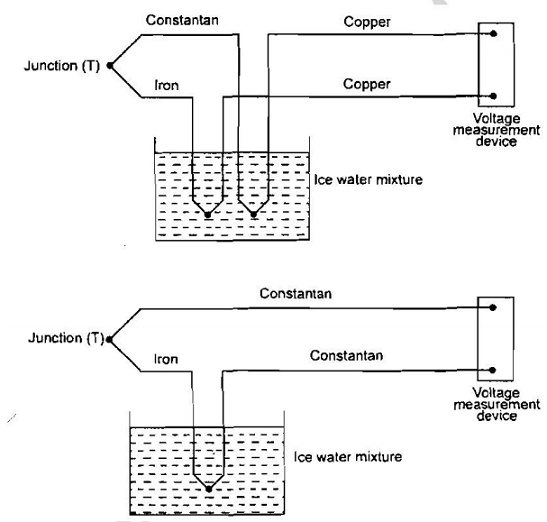