Taste Bud and Its Function 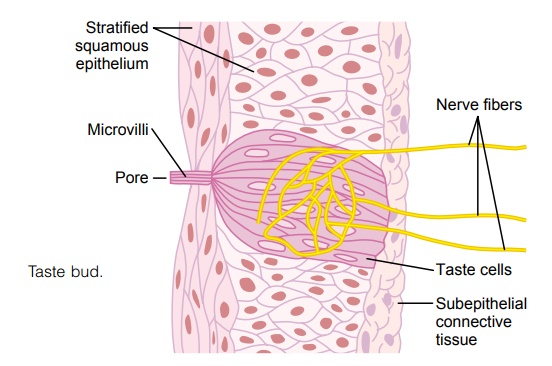 The taste bud is composed of about 50 modi-fied epithelial cells, some of which are supporting cells called sustentacular cells and others of which are tastecells.

Taste Bud and Its Function

Figure 53–1 shows a taste bud, which has a diameter of about 1/30 millimeter and a length of about 1/16 mil-limeter. The taste bud is composed of about 50 modi-fied epithelial cells, some of which are supporting cells called sustentacular cells and others of which aretastecells. The taste cells are continually being replaced bymitotic division of surrounding epithelial cells, so that some taste cells are young cells. Others are mature cells that lie toward the center of the bud; these soon break up and dissolve. The life span of each taste cell is about 10 days in lower mammals but is unknown for humans. 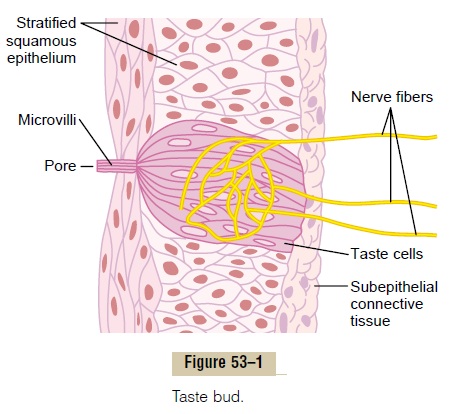 The outer tips of the taste cells are arranged around a minute taste pore, shown in Figure 53–1. From the tip of each taste cell, severalmicrovilli, or taste hairs, pro-trude outward into the taste pore to approach the cavity of the mouth. These microvilli provide the receptor surface for taste.

Interwoven around the bodies of the taste cells is a branching terminal network of taste nerve fibers that are stimulated by the taste receptor cells. Some of these fibers invaginate into folds of the taste cell mem-branes. Many vesicles form beneath the cell membrane near the fibers. It is believed that these vesicles contain a neurotransmitter substance that is released through the cell membrane to excite the nerve fiber endings in response to taste stimulation.

Location of the Taste Buds. The taste buds are found onthree types of papillae of the tongue, as follows: (1) A large number of taste buds are on the walls of the troughs that surround the circumvallate papillae, which form a V line on the surface of the posterior tongue. (2) Moderate numbers of taste buds are on the fungiform papillae over the flat anterior surface of the tongue. (3) Moderate numbers are on the foliate papil-lae located in the folds along the lateral surfaces of the tongue. Additional taste buds are located on the palate, and a few are found on the tonsillar pillars, on the epiglottis, and even in the proximal esophagus. Adults have 3000 to 10,000 taste buds, and children have a few more. Beyond the age of 45 years, many taste buds degenerate, causing the taste sensation to become progressively less critical in old age.

Mechanism of Stimulation of Taste Buds Receptor Potential. The membrane of the taste cell,like that of most other sensory receptor cells, is nega-tively charged on the inside with respect to the outside. Application of a taste substance to the taste hairs causes partial loss of this negative potential—that is, the taste cell becomes depolarized. In most instances, the decrease in potential, within a wide range, is approximately proportional to the logarithm of con-centration of the stimulating substance. This change inelectrical potential in the taste cell is called the recep-tor potential for taste.

The mechanism by which most stimulating sub-stances react with the taste villi to initiate the recep-tor potential is by binding of the taste chemical to a protein receptor molecule that lies on the outer surface of the taste receptor cell near to or protruding through a villus membrane. This, in turn, opens ion channels, which allows positively charged sodium ions or hydrogen ions to enter and depolarize the normal negativity of the cell. Then the taste chemical itself is gradually washed away from the taste villus by the saliva, which removes the stimulus.

The type of receptor protein in each taste villus determines the type of taste that will be perceived. For sodium ions and hydrogen ions, which elicit salty and sour taste sensations, respectively, the receptor proteins open specific ion channels in the apical mem-branes of the taste cells, thereby activating the recep-tors. However, for the sweet and bitter taste sensations, the portions of the receptor protein molecules that protrude through the apical membranes activate second-messenger transmitter substances inside thetaste cells, and these second messengers cause intra-cellular chemical changes that elicit the taste signals.