The primary syphilitic lesion is a papule which evolves to an ulcer at the site of infection.

The primary syphilitic lesion is a papule which evolves to an ulcer at the site of infection. This is usually the external genitalia or cervix but could be in the anal or oral area de-pending on the nature of sexual contact. The lesion becomes indurated and ulcerates but remains painless although slightly sensitive to touch. The fully developed ulcer with a firm base and raised margins is called the chancre (Fig 27 – 2). Firm, nonsuppurative, painless enlargement of the regional lymph nodes usually develops within 1 week of the primary lesion and may persist for months. The median incubation period from contact until appearance of the primary lesion is about 3 weeks (range 3 to 90 days). It heals spontaneously after 4 to 6 weeks.

Secondary or disseminated syphilis develops 2 to 8 weeks after the appearance of the chancre. The primary lesion has usually healed but may still be present. This most florid form of syphilis is characterized by a symmetric mucocutaneous maculopapular rash and generalized nontender lymph node enlargement with fever, malaise and other manifestations of systemic infection. Skin lesions are distributed on the trunk and extremities, often including the palms, soles, and face, and can mimic a variety of infectious and noninfectious skin eruptions. About one third of patients develop painless mucosal warty erosions called condylomata lata. These erosions usually develop in warm, moist sites such as the genitals and perineum. All the lesions of secondary syphilis are teeming with spirochetes and are highly infectious. They resolve spontaneously after a few days to many weeks, but the infection has resolved in only one third of patients. In the remaining two thirds of patients, the illness enters the latent state.

Latent syphilis is by definition a stage where there are no clinical manifestations but con-tinuing infection is evidenced by serologic tests. In the first few years latency may be in-terrupted by progressively less severe relapses of secondary syphilis. In late latent syphilis (>4 years) relapses cease, and patients become resistant to reinfection. Transmis-sion to others is possible from relapsing secondary lesions and by transfusion or other contact with blood products. Mothers may transmit T. pallidum to their fetus throughout latency. About one third of untreated cases do not progress beyond this stage.

Another one third of patients with untreated syphilis develop tertiary syphilis. The mani-festations may appear as early as 5 years after infection but characteristically occur after 15 to 20 years. The manifestations depend on the body sites involved the most important of which are the nervous and cardiovascular systems.

Neurosyphilis is due to the damage produced by a mixture of meningovasculitis anddegenerative parenchymal changes in virtually any part of the nervous system. The most common entity is a chronic meningitis with fever, headache, focal neurologic findings, and increased cells and protein in the cerebrospinal fluid (CSF). Cortical degeneration of the brain causes mental changes ranging from decreased memory to hallucinations or frank psychosis. In the spinal cord demyelination of the posterior columns, dorsal roots, and dorsal root ganglia produces a syndrome called tabes dorsalis which includes ataxia, wide-based gait, foot slap, and loss of the sensation. The most advanced central nervous system (CNS) findings include a combination of neurologic deficits and behavioral distur-bances called paresis, which is also a mnemonic (personality, affect, reflexes, eyes, sen-sorium, intellect, speech) for the myriad of changes seen.

Cardiovascular syphilis is due to arteritis involving the vasa vasorum of the aortacausing a medial necrosis and loss of elastic fibers. The usual result is dilatation of the aorta and aortic valve ring. This in turn leads to aneurysms of the ascending and trans-verse segments of the aorta and/or aortic valve incompetence. The expanding aneurysm can produce pressure necrosis of adjacent structures or even rupture. A localized, granulo-matous reaction to T. pallidum infection called a gumma may be found in skin, bones, joints, or other organ. Any clinical manifestations are related to the local destruction as with other mass-producing lesions, such as tumors.

Fetuses are susceptible to syphilis only after the fourth month of gestation, and adequate treatment of infected mothers before that time prevents fetal damage. Because active syphilitic infection is devastating to infants, routine serologic testing is performed in early pregnancy and should be repeated in the last trimester in women at high risk of ac-quiring syphilis. Untreated maternal infection may result in fetal loss or congenital syphilis, which is analogous to secondary syphilis in the adult. Although there may be no physical finding at all, the most common are rhinitis and a maculopapular rash. Bone involvement produces characteristic changes in the architecture of the entire skeletal sys-tem (saddle nose, saber shins). Anemia, thrombocytopenia, and liver failure are terminal events.

T. pallidum can be seen by darkfield microscopy in primary and secondary lesions, but theexecution of this procedure requires experience and attention to detail. The suspect lesion must be cleaned and abraded to produce a serous transudate from below the surface of the ulcer base. This material can be captured in a capillary tube or placed directly on a micro-scope slide if a darkfield setup is close at hand. The microscopist must observe the corkscrew morphology and characteristic motility to make a diagnosis (Fig 27 – 3). A nega-tive examination does not exclude syphilis, because to be readily seen, the fluid must con-tain thousands of treponemes per milliliter. Darkfield microscopy of oral and anal lesions is not recommended because of the risk of misinterpretation of other spirochetes present in the normal flora. Direct fluorescent antibody methods have been developed but are available only in certain centers.

Most cases of syphilis are diagnosed serologically using serologic tests that detect anti-bodies directed at either lipid or specific treponemal antigens. The former are called non-treponemal tests, and the latter are referred to as treponemal tests. Their use in screening, diagnosis, and therapeutic evaluation of syphilis has been refined over many decades.

Nontreponemal tests measure antibody directed against cardiolipin, a lipid complex so called because one component was originally extracted from beef heart. Anticardiolipin antibody is called reagin, and the tests which detect it depend on immune flocculation of cardiolipin in the presence of other lipids. The most common nontreponemal tests are the rapid plasma rea-gin (RPR) and the Venereal Disease Research Laboratory (VDRL). They become positive in the early stages of the primary lesion and, with the possible exception of some patients with advanced human immunodeficiency virus (HIV) infection, are uniformly positive during the secondary stage. They slowly wane in the later stages of the disease. In neurosyphilis, VDRL tests on CSF may be positive when the serum VDRL has reverted to negative. Nontreponemal tests are nonspecific; they may become positive in a variety of autoimmune diseases or in diseases involving substantial tissue or liver destruction, such as lupus erythematosus, viral hepatitis, infectious mononucleosis, and malaria. False-positive results can also occur occa-sionally in pregnancy and in patients with HIV infection.

Sensitivity and low cost make nontreponemal tests preferred for screening, but if posi-tive, they must be confirmed by one of the more specific treponemal tests described be-low. They are also valuable for following treatment because the height of the antibody titer is directly related to activity of disease. With successful antibiotic therapy nontre-ponemal serologies slowly revert to negative.

Treponemal tests detect antibody specific to T. pallidum such as an indirect immuno-fluorescent procedure called the fluorescent treponemal antibody (FTA-ABS) which uses spirochetes fixed to slides. The “ABS” refers to an absorption step that removes nonspecific antispirochetal antibodies often found in normal serum. Another method, the microhemagglutination test for T. pallidum (MHA-TP), uses antigens attached to the surface of erythrocytes, which then agglutinate in the presence of specific antibody.

Treponemal tests are considerably more specific than the cardiolipin-based nontre-ponemal tests. Their primary role in diagnosis is to confirm positive RPR and VDRL results obtained in the evaluation of a patient suspect for syphilis or in screening pro-grams. They are not useful for screening or following therapy because, once positive, they usually remain so for life. Thus, if nontreponemal tests can be thought of as the measure of active syphilis, treponemal tests are the indelible print of sin. The time course of serologic tests in the various stages of syphilis is illustrated in Figure 27 – 4. Until recently, it was believed that a negative treponemal test excluded the possibility of prior syphilis. 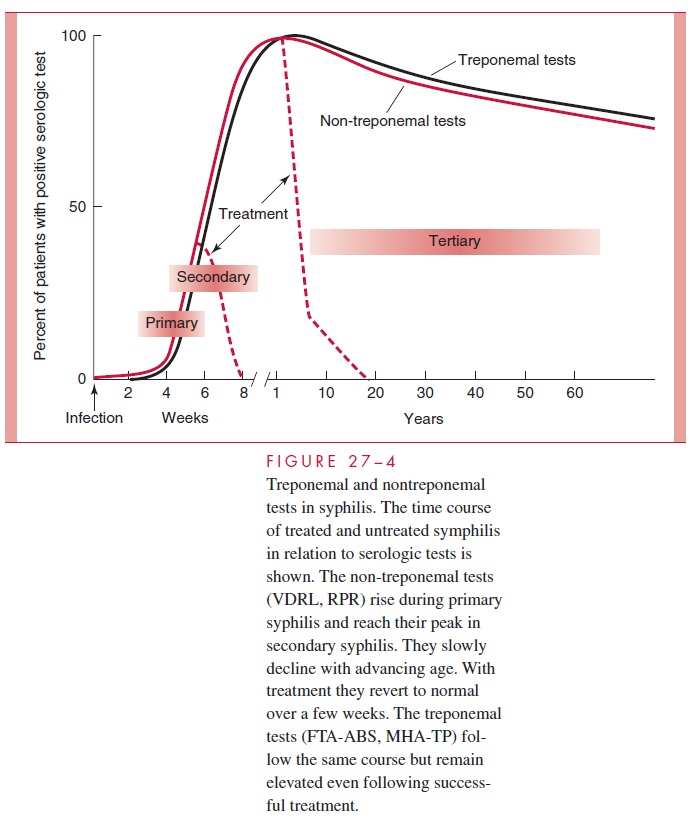 The use of serologic tests in the diagnosis of congenital syphilis is complicated by the presence of IgG antibodies in infants, who acquire it transplacentally from their mothers. If available, treponemal IgM tests are useful in establishing the presence of an acute in-fection in infants.

T. pallidum remains exquisitely sensitive to penicillin, which is the preferred treatment inall stages. In primary, secondary, or latent syphilis persons hypersensitive to penicillin may be treated with tetracyclines, erythromycin, or cephalosporins. The efficacy of agents other than penicillin has not been established in tertiary or congenital syphilis. It is rec-ommended that penicillin-hypersensitive patients with neurosyphilis or congenital syphilis be desensitized rather than use an alternate antimicrobial. Safe sex practices are as effective for prevention of syphilis as they are for other sexually transmitted diseases. Their use to prevent HIV infection probably accounts for much of the recent decline in new syphilis cases. The development of a vaccine awaits greater understanding of patho-genesis and immunity.