Synthesis of Triglycerides from Carbohydrates

Whenever a greater quantity of carbohydrates enters the body than can be used immediately for energy or can be stored in the form of glycogen, the excess is rapidly converted into triglycerides and stored in this form in the adipose tissue.

Synthesis of Triglycerides from Carbohydrates

Whenever a greater quantity of carbohydrates enters the body than can be used immediately for energy or can be stored in the form of glycogen, the excess is rapidly converted into triglycerides and stored in this form in the adipose tissue.

Conversion  of  Acetyl-CoA into  Fatty  Acids.  Thefirst  step in  the  synthesis  of triglycerides  is  conversion  of carbohydrates into acetyl-CoA. This occurs during the normal degradation of glucose by the glycolytic system. Because fatty acids are actually large polymers of acetic acid, it is easy to understand how acetyl-CoA can be converted into fatty acids. However, the synthesis of fatty acids from acetyl-CoA is not achieved by simply reversing the oxidative degradation described earlier. Instead, this occurs by the two-step process shown in Figure 68–2, using malonyl-CoA and NADPH as the principal intermediates in thepolymerization process. 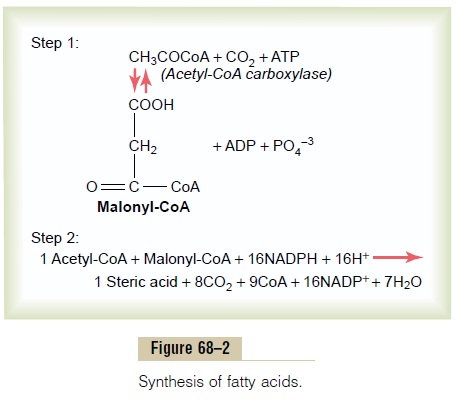 Combination of Fatty Acids with a-Glycerophosphate to Form Triglycerides. Once the synthesized fatty acid chains havegrown to contain 14 to 18 carbon atoms, they bind with glycerol to form triglycerides. The enzymes that cause this conversion are highly specific for fatty acids with chain lengths of 14 carbon atoms or greater, a factor that controls the physical quality of the triglycerides stored in the body.

As shown in Figure 68–3, the glycerol portion of triglycerides is furnished by a-glycerophosphate, which is another product derived from the glycolytic scheme of glucose degradation. 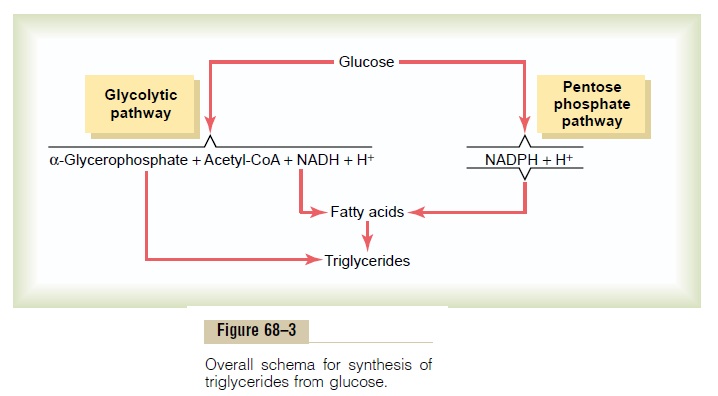 Efficiency of Carbohydrate Conversion into Fat. During triglyc-eride synthesis, only about 15 per cent of the original energy in the glucose is lost in the form of heat; the remaining 85 per cent is transferred to the stored triglycerides.

2.Each gram of fat contains almost two and a half times the calories of energy contained by each gram of glycogen. Therefore, for a given weight gain, a person can store several times as much energy in the form of fat as in the form of carbohydrate, which is exceedingly important when an animal must be highly motile to survive.

Failure to Synthesize Fats from Carbohydrates in the Absence of Insulin. When no insulin is available, as occurs in seriousdiabetes mellitus, fats are poorly synthesized, if at all, for the following reasons: First, when insulin is not avail-able, glucose does not enter the fat and liver cells satis-factorily, so that little of the acetyl-CoA and NADPH needed for fat synthesis can be derived from glucose. Second, lack of glucose in the fat cells greatly reduces the availability of a-glycerophosphate, which also makes it difficult for the tissues to form triglycerides.