Atherosclerosis is a disease of the large and intermedi-ate-sized arteries in which fatty lesions called athero-matous plaques develop on the inside surfaces of thearterial walls.

Atherosclerosis is a disease of the large and intermedi-ate-sized arteries in which fatty lesions called athero-matous plaques develop on the inside surfaces of thearterial walls. Arteriosclerosis, in contrast, is a general term that refers to thickened and stiffened blood vessels of all sizes.

One abnormality that can be measured very early in blood vessels that later become atherosclerotic is damage to the vascular endothelium. This, in turn,increases the expression of adhesion molecules on endothelial cells and decreases their ability to release nitric oxide and other substances that help prevent adhesion of macromolecules, platelets, and monocytes to the endothelium. After damage to the vascular endothelium occurs, circulating monocytes and lipids (mostly low-density lipoproteins) begin to accumulate at the site of injury (Figure 68–6A). The monocytes cross the endothelium, enter the intima of the vessel wall, and differentiate to become macrophages, which then ingest and oxidize the accumulated lipoproteins, giving the macrophages a foamlike appearance. These macrophage foam cells then aggregate on the bloodvessel and form a visible fatty streak. 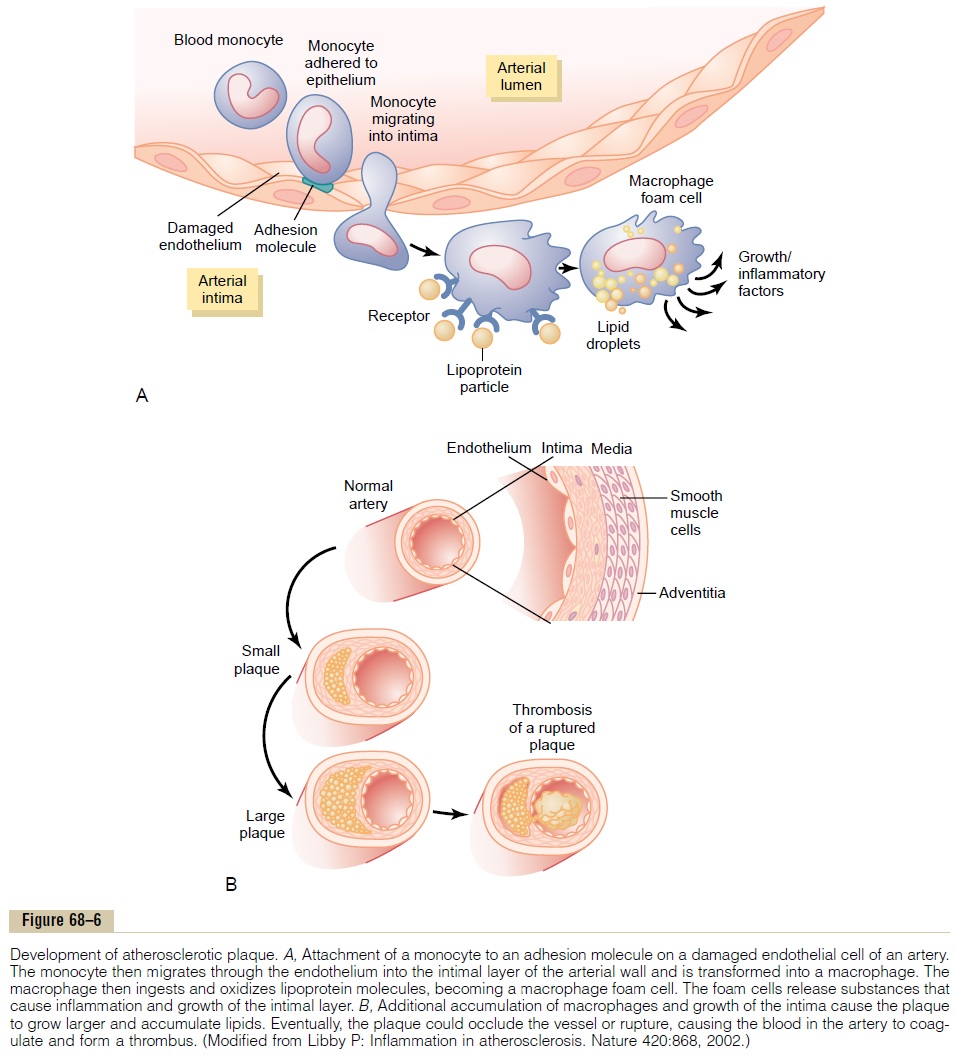 With time, the fatty streaks grow larger and coalesce, and the surrounding fibrous and smooth muscle tissues proliferate to form larger and larger plaques (see Figure 68–6B). Also, the macrophages release substances that cause inflammation and further proliferation of smooth muscle and fibrous tissue on the inside surfaces of the arterial wall. The lipid deposits plus the cellular prolif-eration can become so large that the plaque bulges into the lumen of the artery and greatly reduces blood flow, sometimes completely occluding the vessel. Even without occlusion, the fibroblasts of the plaque eventu-ally deposit extensive amounts of dense connective tissue;sclerosis (fibrosis) becomes so great that the arteries become stiff and unyielding. Still later, calcium salts often precipitate with the cholesterol and other lipids of the plaques, leading to bony-hard calcifications that can make the arteries rigid tubes. Both of these later stages of the disease are called “hardening of the arteries.”

Atherosclerotic arteries lose most of their distensi-bility, and because of the degenerative areas in their walls, they are easily ruptured. Also, where the plaques protrude into the flowing blood, their rough surfaces can cause blood clots to develop, with resultant throm-bus or embolus formation, leading to a sudden blockage of all blood flow in the artery.

Almost half of all deaths in the United States and Europe are due to vascular disease. About two thirds of these deaths are caused by thrombosis of one or more coronary arteries. The remaining one third are caused by thrombosis or hemorrhage of vessels in other organs of the body, especially the brain (causing strokes), but also the kidneys, liver, gastrointestinal tract, limbs, and so forth.