Cholesterol, the formula of which is shown in Figure 68–5, is present in the diets of all people, and it can be absorbed slowly from the gastrointestinal tract into the intestinal lymph.

Cholesterol, the formula of which is shown in Figure 68–5, is present in the diets of all people, and it can be absorbed slowly from the gastrointestinal tract into the intestinal lymph. It is highly fat soluble but only slightly soluble in water. It is specifically capable of forming esters with fatty acids. Indeed, about 70 per cent of the cholesterol in the lipoproteins of the plasma is in the form of cholesterol esters. 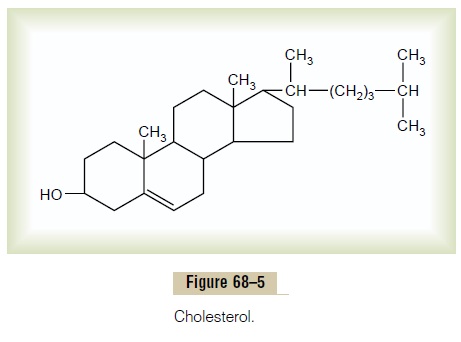 Formation of Cholesterol. Besides the cholesterol absorbedeach day from the gastrointestinal tract, which is called exogenous cholesterol, an even greater quantity isformed in the cells of the body, called endogenous cho-lesterol. Essentially all the endogenous cholesterol thatcirculates in the lipoproteins of the plasma is formed by the liver, but all other cells of the body form at least some cholesterol, which is consistent with the fact that many of the membranous structures of all cells are par-tially composed of this substance.

The basic structure of cholesterol is a sterol nucleus. This is synthesized entirely from multiple molecules of acetyl-CoA. In turn, the sterol nucleus can be modified by means of various side chains to form (1) cholesterol; (2) cholic acid, which is the basis of the bile acids formed in the liver; and (3) many important steroid hormones secreted by the adrenal cortex, the ovaries, and the testes.

Factors That Affect Plasma Cholesterol Concentration—Feed- back Control of Body Cholesterol. Among the importantfactors that affect plasma cholesterol concentration are the following:

2.A highly saturated fat diet increases blood cholesterol concentration 15 to 25 per cent. This results from increased fat deposition in the liver, which then provides increased quantities of acetyl-CoA in the liver cells for the production of cholesterol. Therefore, to decrease the blood cholesterol concentration, it is usually just as important, if not more important, to maintain a diet low in saturated fat as to maintain a diet low in cholesterol.

3.Ingestion of fat containing highly unsaturated fattyacids usually depresses the blood cholesterolconcentration a slight to moderate amount. The mechanism of this effect is unknown, despite the fact that this observation is the basis of much present-day dietary strategy.

These effects are probably caused mainly by changes in the degree of activation of specific enzymes responsible for the metabolism of lipid substances.

A small quantity of cholesterol is used by (1) the adrenal glands to form adrenocortical hormones, (2) the ovaries to formprogesterone and estrogen, and (3) the testes to form testosterone. These glands can also synthesize their own sterols and then form hormones from them.

A large amount of cholesterol is precipitated in the corneum of the skin. This, along with other lipids, makes the skin highly resistant to the absorption of water-soluble substances and to the action of many chemical agents, because cholesterol and the other skin lipids are highly inert to acids and to many solvents that might otherwise easily penetrate the body. Also, these lipid substances help prevent water evaporation from the skin; without this protection, the amount of evaporation can be 5 to 10 liters per day (as occurs in burn patients who have lost their skin) instead of the usual 300 to 400 milliliters.