Symptoms and Signs of Menopause

Menopause is a physiologic process that can be associated with symptoms that may affect a woman’s quality of life.

SYMPTOMS AND SIGNS OF MENOPAUSE

Menopause is a physiologic process that can be associated with symptoms that may affect a woman’s quality of life.

Decreased estrogen production can result in multiple systemic effects (Fig. 37.2). Many of these symptoms can be amelio-rated with hormone therapy. The need for hormone therapy should be individualized based on a woman’s specific risk factors.

Beginning at approximately 40 years of age, the number of a woman’s ovarian follicles diminishes, and subtle changes occur in the frequency and length of menstrual cycles. A woman may note shortening or lengthening of her cycles. The luteal phase of the cycle remains constant at 13 to 14 days, whereas the variation of cycle length is related to a change in the follicular phase. As a woman approaches menopause, the frequency of ovulation decreases from 13 to 14 times per year to 11 to 12 times per year. With advancing reproductive age, ovulation frequency may decrease to 3 to 4 times per year.

With the change in reproductive cycle length and fre-quency, there are concomitant changes in the plasma con-centration of FSH and LH. More FSH is required to stimulate follicular maturation. Beginning in the late 30s and early 40s, the concentration of FSH begins to increase from normal cyclic ranges (6–10 IU/L) to perimenopausal levels (14–24 IU/L). During this period, women begin to experience symptoms and signs of decreasing estrogen levels. Levels of FSH are 30 IU/L or more at menopause.

Coincident with the change in reproductive cycle length and frequency, the hot flush is the first physical manifestation of decreasing ovarian function and is a symptom of vasomotor instability.

Hot flushes are recurrent, transient episodes of flushing, perspiration, and a sensation ranging from warmth to intense heat on the upper body and face, sometimes fol-lowed by chills. When they occur during sleep and are asso-ciated with perspiration, they are termed night sweats. Occasional hot flushes begin several years before actual menopause. Other conditions that can cause hot flushes include thyroid disease, epilepsy, infection, and use of cer-tain drugs.

The hot flush is the most common symptom of decreased estrogen production and is considered one of the hallmark signs of perimenopause. However, its incidence varies widely. SomeU.S. studies have found that about 75% of women experi-enced hot flushes during the transition from the peri-menopause to postmenopause. Outside the United States, rates vary even more widely, from about 10% in Hong Kong to 62% in Australia.

Reasons for these differences are unknown. In the United States, prevalence rates also differ among racial and ethnic groups, with African-Americans most frequently reporting symptoms (45.6%), followed by Hispanics (35.4%), whites (31.2%), Chinese (20.5%), and Japanese (17.6%). More recent studies seem to indicate that differences in body mass index (BMI) would be a more reliable indicator of the incidence of hot flushes.

Hot flushes have a rapid onset and resolution. When a hot flush occurs, a woman experiences a sudden sensation of warmth. The skin of the face and the anterior chest wall become flushed for approximately 90 seconds. With reso-lution of the hot flush, a woman feels cold and breaks out into a “cold sweat.” The entire phenomenon lasts less than 3 minutes. The exact cause of hot flushes has not been determined, although it seems that declining estradiol-17β secretion by the ovarian follicles plays a significant role. As a woman approaches menopause, the frequency and inten-sity of hot flushes increase. Hot flushes may be disabling, especially at night. When perimenopausal and post-menopausal women receive hormone therapy, hot flushes usually resolve in 3 to 6 weeks. If a menopausal woman does not receive hormone therapy, hot flushes usually resolve spontaneously within 2 to 3 years, although some women experience them for 10 years or longer.

Declining estradiol levels induce a change in a woman’s sleep cycle so that restful sleep becomes difficult and for some, impossible. The latent phase of sleep (i.e., the time required to fall asleep) is lengthened; the actual period of sleep is shortened. Therefore, perimenopausal and post-menopausal women complain of having difficulty falling asleep and of waking up soon after going to sleep.

Sleep disturbances are one of the most common and disabling effects of menopause.

Women with marked sleep aberration are often tense and irritable and have difficulty with concentration and inter-personal relationships. With hormone therapy, the sleep cycle is restored to the premenopausal state.

The vaginal epithelium, cervix, endocervix, endometrium, myo-metrium, and uroepithelium are estrogen-dependent tissues. With decreasing estrogen production, these tissues become atrophic, re-sulting in various symptoms. The vaginal epithelium becomesthin and cervical secretions diminish. Women experience vaginal dryness while attempting or having sexual inter-course, leading to diminished sexual enjoyment and dys-pareunia. Atrophic vaginitis also may present with itching and burning. The thinned epithelium is also more suscep-tible to becoming infected by local flora. This discomfort can be relieved with systemic or topical hormone therapy or the topical use of estrogen.

The endometrium also becomes atrophic, sometimes resulting in postmenopausal spotting. The paravaginal tis-sues that support the bladder and rectum become atrophic. When this is combined with the effects of child bearing, it can result in loss of support for the bladder (cystocele) and rectum (rectocele). In addition, uterine prolapse is more common in the hypoestrogenic patient. Because of atrophy of the lining of the urinary tract, there may be symptoms of dysuria and urinary frequency, a condition called atrophic urethritis. Hormone therapy can relieve the symptoms ofurgency, frequency, and dysuria. Loss of support to the ure-throvesical junction may result in stress urinary inconti-nence; in some cases, hormone therapy plus pelvic muscle (Kegel) exercises may relieve some of these symptoms.

Perimenopausal and postmenopausal women often com-plain of volatility of affect. Some women experience depres-sion, apathy, and “crying spells.” These feelings may be related to menopause, to sleep disturbances, or both. The physician should provide counseling and emotional support as well as medical therapy, if indicated. Although sex steroidhormone receptors are present in the central nervous system, there is insufficient evidence about the role of estrogens in central ner-vous system function.

Some women notice changes in their hair and nails with the hor-monal changes of menopause. Estrogen influences skin thick-ness. With declining estrogen production, the skin tends to become thin, less elastic, and eventually more susceptible to abrasion and trauma. Estrogen stimulates the production of the sex hormone-binding globulin, which binds androgens and estrogens. With declining estrogen production, less sex hormone-binding globulin is available, thus increasing the level of free testosterone. Increased testosterone levels may result in increased facial hair. Moreover, changes in estro-gen production affect the rate of hair shedding. Hair from the scalp is normally lost and replaced in an asynchronous way. With changes in estrogen production, hair is shed and replaced in a synchronous way, resulting in the appearance of increased scalp hair loss. This is a self-limiting condition and requires no therapy, but patients do require reassur-ance. Nails become thin and brittle with estrogen depriva-tion, but are restored to normal with estrogen therapy.

Bone demineralization is a natural consequence of aging.Diminishing bone density occurs in both men and women. However, the onset of bone demineralization occurs 15 to 20 years earlier in women than in men by virtue of accel-eration after ovarian function ceases. Bone demineraliza-tion not only occurs with natural menopause, but also has been reported in association with decreased estrogen pro-duction in certain groups of young women (such as those with eating disorders or elite athletes). Other factors con-tribute to the risk of osteoporosis (Box 37.1). 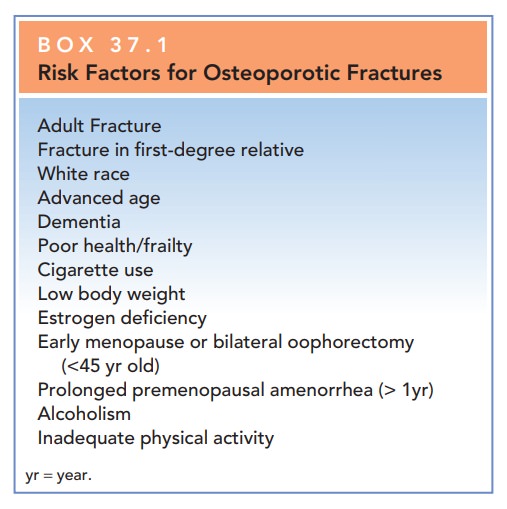 Estrogen receptors are present in osteoblasts, which suggests a permissive and perhaps even an essential role for estrogen in bone formation. Estrogen affects the developmentof cortical and trabecular bone, although the effect on the latteris more pronounced. Bone density diminishes at the rate of approximately 1% to 2% per year in postmenopausal women, compared with approximately 0.5% per year in perimenopausal women (Fig. 37.3). 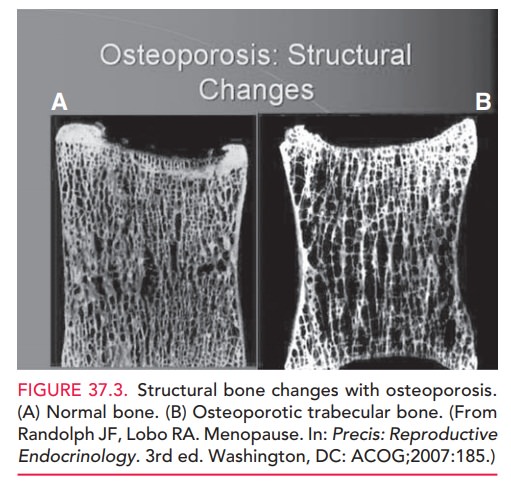 Hormone therapy, especially whencombined with appropriate calcium supplementation and weight-bearing exercise, can help slow bone loss in meno-pausal women. Weight-bearing activity such as walking for as little as 30 minutes a day increases the mineral content of older women.

In addition, for those with lim-ited sun exposure or those lacking other dietary sources, supplementation with vitamin D should be considered: 10 μg from ages of 51 to 70; 15 μg, older than 71.

Progressive, linear decrease in bone mineral mass is noted in women who do not receive hormone therapy in the first 5 to 10 years following menopause. When hor-mone therapy is initiated before or at the time of meno-pause, bone density loss is greatly reduced. Hormone therapy begun in a woman 5 or more years after menopause may still have a positive effect on bone density loss. How-ever, osteoporosis is not the primary indication for hormone therapy. Several bisphosphonates such as alendronate,ibandronate, or risedronate can be used for the manage-ment of menopause-associated bone loss. These agents reduce bone resorption through the inhibition of osteoclas-tic activity (Table 37.3). 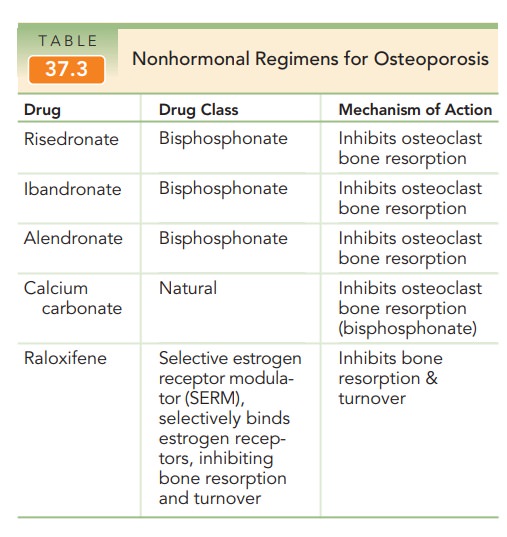 Selective estrogen receptor modulators (SERMs) provide another nonhormonal management option. Most estrogenicresponses are mediated in the body by one of two receptors, either ER (alpha) or ER (beta). SERMs are ER ligands, which act like estrogens in some tissues but block estrogen action in others. Examples include tamoxifen and raloxifene, which exhibit ER antagonist activity in the breast but ago-nist activity in the bone. As with the bisphosphonates, they also lack the capabilities of mitigating many of the other estrogen deprivation symptoms, such as hot flushes and sleeplessness, and may even exacerbate these symptoms.

With perimenopause, changes occur in the cardiovascular lipid profile.

Total cholesterol increases, high-density lipoprotein (HDL) cholesterol decreases, and low-density lipoprotein (LDL) cholesterol increases. Hormone therapy may pro-mote changes in the lipid profile that are favorable to the cardiovascular system. Retrospective case control studies suggest that estrogens have a cardioprotective effect. However, recent data from the Women’s Health Initiative (WHI) suggest that no such protection exists in placebo control clinical trials, though these trials have been criti-cized because of the late onset of treatment following menopause. At this time, hormone therapy should not beoffered to patients with the primary goal of protection against heart disease.