Menopause is the permanent cessation of menses afterM cessation of estrogen production.Perimenopauseis theperiod before menopause, i.e., the transition from the reproductive to the nonreproductive years. The time period dur-ing which the changes of menopause occur is called the climac-teric. An increasing proportion of American women areincluded in these groups, because the female life expectancy has lengthened and the number of women in this age group is expanding (Fig. 37.1). Many women are expected to live 30 to 35 years—one third of their life expectancy—after menopause. 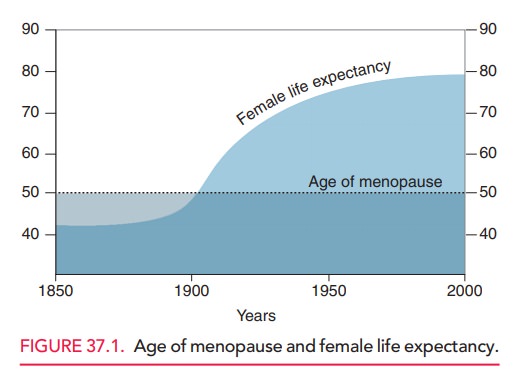 Whereas male gametes are renewed on a daily basis, female gametes are of a fixed number that is progressively reduced throughout a woman’s reproductive life. At the time of birth, the female infant has approximately 1 to 2 million oocytes; by puberty, she has approximately 400,000 oocytes remaining. By age 30 to 35, the number of oocytes will have decreased to approximately 100,000. For the remain-ing reproductive years, the process of oocyte maturation and ovulation becomes increasingly inefficient.

A woman ovulates approximately 400 oocytes during her reproductive years. The process of oocyte selection is complex and new information is making the process clearer. During the reproductive cycle, a cohort of oocytes is stim-ulated to begin maturation, but only 1 or 2 dominant folli-cles complete the process and are eventually ovulated.

Follicular maturation is induced and stimulated bythe pituitary release of the follicle-stimulating hormone (FSH) and luteinizing hormone (LH). FSH binds to its receptors in the follicular membrane of the oocyte and stimulates follicular maturation, providing estradiol (E2), which is the major estrogen of the reproductive years. LH stimulates the theca luteal cells surrounding the oocyte to produce androgens as well as estrogens and serves as the triggering mechanism to induce ovulation. With advanc-ing reproductive age, the remaining oocytes become increasingly resistant to FSH. Thus, plasma concentra-tions of FSH begin to increase several years in advance of actual menopause, when the FSH is generally found to be >30 mIU/mL (Table 37.1). 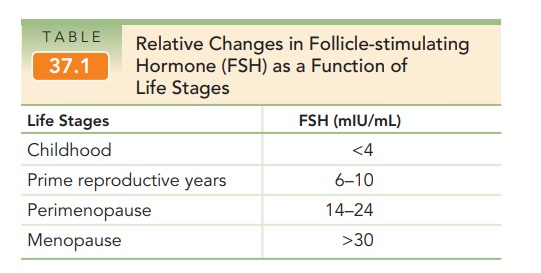 Menopause marks the end of a woman’s natural repro-ductive life. The average age for menopause in the United Statesis between 50 and 52 years of age (median 51.5), with 95% ofwomen experiencing this event between the ages of 44 and

The age of menopause is not influenced by the age of menarche, number of ovulations or pregnancies, lactation, or the use of oral contraceptives. Race, socioeconomic sta-tus, education, and height also have no effect on the age of menopause. Genetics and lifestyle can affect the age of menopause. Undernourished women and smokers do tend to have an earlier menopause, although the effect is slight. Approximately 1% of women undergo menopause before the age of 40, which is generally referred to as prematureovarian failure.

Contrary to popular belief, the ovaries of postmeno-pausal women are not quiescent. Under the stimulation of LH, theca cell islands in the ovarian stroma produce hormones, primarily the androgens testosterone and andro-stenedione. Testosterone appears to be the major product of the postmenopausal ovary. Testosterone concentrations decline after menopause, but remain two times higher in menopausal women with intact ovaries than in those whose ovaries have been removed. Estrone is the predominant endogenous estrogen in postmenopausal women. It is termed extragonadal estrogen, because the concentration is directly related to body weight. Androstenedione is con-verted to estrone in fatty tissue (Table 37.2).