5 Difference between Type I & Type-II superconductors

Super conductivity is one of the most existing phenomena in physics. It was discovered by Dutch physicist H.K Onnes in the year 1905.

The phenomenon of sudden disappearance of electrical resistance in a material, when it is cooled blow a certain temperature is known as super conductivity.

It is to note that the metals which are normally very good conductors of heat and electricity (e.g. Cu. Ag, Au) are not super conductors.

1.     Superconductivity is found to occur in metallic elements in which the number of valence electron lies between 2 and 4.

4.     The transition temperature(Tc) is different for different substances.

6.     The electrical resistivity drops to zero.

7.     The magnetic flux lines are expelled from the material.

8.     There is a discontinuous change in the specific heat.

9.     Further, there is some small changes in the thermal conductivity and the volume of the materials.

Below the transition temperature of a material, its superconductivity can be destroyed by the application of a strong magnetic field.

Where, Ho- is critical magnetic field at absolute zero temperature.

Tc- is superconducting transition temperature of a material

T –is the temperature below Tc of the superconducting material.

Where Hc –is the critical magnetic field

r - is the radius of the superconducting wire

A steady current which flows through a superconducting ring without any decrease in its strength as long as the material is in superconducting state is called persistent current. The current persists even after the removal of the magnetic field.

When a superconducting material is p the magnetic lines of force penetrates through the material as shown in fig.

Now, when the material is cooled below its transition temperature then the magnetic lines of force are ejected out from the material as shown in fig.

When a superconducting material is placed in a magnetic field, under the condition T≤Tc and H≤Hc the flux lines are excluded diamagnetism. This phenomenon is called as Meissner effect. 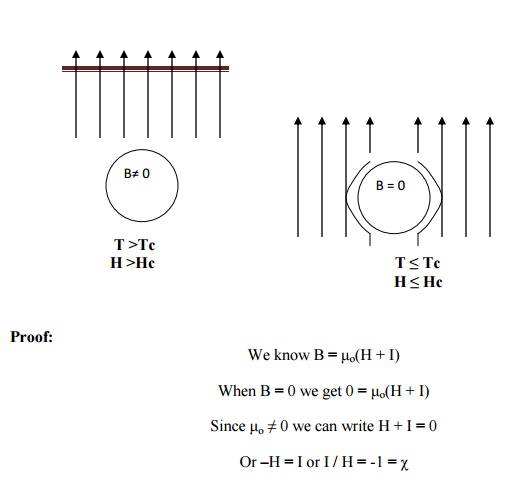 Since the susceptibility is negative, this shows that superconductor is perfect diamagnet.

The transition temperature varies due to presence of isotopes.

There are two types of super conductors based on their variation in magnetization, due to external magnetic field applied. 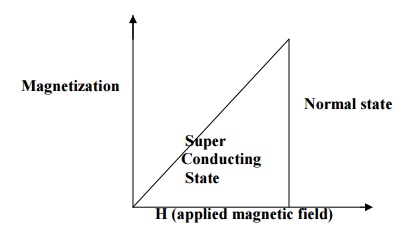 Below critical field, the specimen excludes all the magnetic lines of force and exhibit perfect Meissner effect. Hence, Type I superconductors are perfect diamagnet, represented by negative sign in magnetization. 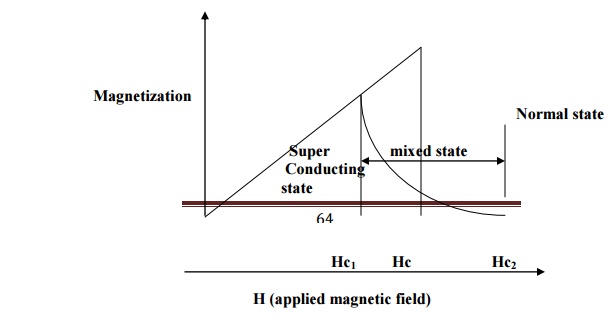 The materials which lose its superconducting property gradually due to increase on the magnetic field are called Type II superconductor.

5 DIFFERENCE BETWEEN TYPE –I AND TYPE –II SUPERCONDUCTORS

2.       They exhibit complete Meissner effect i.e., they are completely diamagnetic.

They do not exhibit complete Meissner effect.

The microscopic theory of superconductivity developed by J. Bardeen, L.N. Cooper and J.R. Scriffer in 1957, successfully explained the effect like zero resistivity, Meissner effect etc. this theory is known as BCS theory.

This theory states that the electrons experience a special kind of attractive interaction, overcoming the coulomb forces of repulsion between them; as a result cooper pairs (i.e) electro pair are formed. At low temperature, these pairs move without any restriction through the lattice points and the material becomes superconductor. Here the electron-lattice-electrons interaction should be stronger than electrons-electros interaction.

The propagation of cooper pairs is without resistance because the electrons move in resonance with phonons.

When an electron (1st) moves through the lattice, it will be attracted by the core (+ve charge) of the lattice. Due to this attraction, ion core is disturbed and it is called as lattice distortion. The lattice vibrations are quantized in terms of phonons.

The deformation produces a region of increased positive charge. Thus if another electron (2nd) moves through this region as shown in fig. it will be attracted by the greater concentration of positive charge and hence the energy of the 2nd electron is lowered.

vector k’, seeks the lattice it takes up the shown in fig. two electrons with wave vectors k-q and k’+qknownformascooperpair.pair

In the electron-lattice-electron interaction, the electrons will not be fixed, they move in opposite directions and their co-relations may persist over lengths of maximum 10-6m. This length is called coherence length.

Earlier it was believed that the superconductivity was only in metals. Surprisingly in 1986, Muller and Bednorz discovered high temperature superconductor in ceramics.

They made a particular type of ceramic material from a compound of barium, lanthanum, copper and oxygen (Ba-La-Cu-O). This compound superconductor showed superconductivity even at a temperature as high as 30K.

The oxide Y Ba2 Cu3 O7 with a Tc of 90K was the most extensively studied high temperature superconductor.

They have high transition temperature.

Formation of the superconducting state is direction dependent.

They are oxides of copper in combination with other elements.

They are reactive, brittle, and cannot be easily modified or joined.

The oxide (Y Ba2 Cu3 O9-x) is prepared from compacted powder mixture of Y2O3, BaCO3 and CuO in the right proportion and heating them in temperature between 900°C and 1100°C. BaCO3 decomposes at this temperature to BaO and CO2. This is followed by another annealing treatment at 800°C in an atmosphere of oxygen.

Here, the primitive cell is developed by three body centered cubic unit cells stacked one above the the other to form a tetragonal (a=b≠c) perovskite structure tripled along the C axis.

Each yttrium atom is shared by one unit cell.

Each barium atom is one unit cell

Each yttrium atom is shared by 8 unit cells [since copper is the corner atoms].

Each yttrium atom is shared by 4unit cells [since oxygen atoms are situated at mid points between two corner atoms].

Superconducting generators are very small in size and light weight when compared with conventional generators. The low loss superconducting coil is rotated in extremely strong magnetic field. Motors with very high powers as large as 2500 kw could be constructed at very low as 450 V. This is the basis of new generation of energy saving power systems.

We know that the superconducting property of a material disappears when the applied magnetic field is greater than the critical magnetic field.

Now at the operating temperature, the magnetic field produced by material B may exceed the critical

A steady and undiminishing current (Persistent of current) influenced by d.c. voltage is the principle used in Josephson devices.

It consists of a thin layer of oxide material placed in between tow supeconducting materials as shown in. Here, the Oxide layer acts as a barrier to the flow of conduction electrons from one superconductor to the other.

QUID  stands  for  Superconducting  Quantum  Interference  Device.  It  is  an  ultra-sensitive instrument used to measure very weak magnetic field in the order of 10-14 tesla.

A SQUID consist of superconducting wire which can have the magnetic field of quantum values (1, 2, 3…) of flux placed in between two Josephson junctions as shown in fig.

Then magnetic field if applied perpendicular to the plane of the ring, the current is produced at the two Josephson junctions. The induced  current produces the  interference  pattern and  it  flows through the ring so that the magnetic flux in the ring can have the quantum value of magnetic field applied.

It can be used to detect the variation of very minute magnetic signals in terms of quantum flux. It can also be used as storage device for magnetic flux.

It is useful in the study of earthquakes, removing paramagnetic impurities, detection of magnetic signals from the brain, heart.

Magnetic levitated train is the train which cannot move over the rail, rather it floats above the rail, under the condition, when it moves faster.

Electromagnetic induction is used as the principle. (i.e) when there is a relative motion of a conductor across the magnetic field, current is induced in the conductor and vice versa. 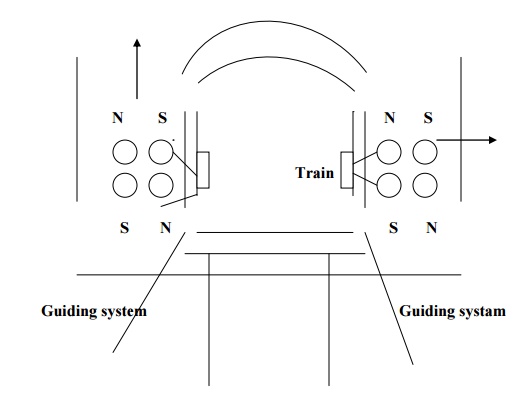 This train consists of superconducting magnets placed on each side of the train. The train can run in a guidance system which consists of a series of 8 shaped coils as shown in fig.

Initially when the train starts, they slide on the rails. Now, when the train moves faster, the superconducting magnets on each side of th kept in the guidance system.

This induced current generates a magnetic force in the coils in such a way that the lower half of the 8-shaped coil has the same magnetic pole as that of the superconducting magnet in the train, while the upper half has the opposite magnetic pole.

Therefore the total upward magnetic force acts on the train and hence the train is levitated (or) raised above the wheels (i.e) the train now floats above the air.

Now, by alternatively changing the poles of the superconducting magnet in the train alternating current can be induced in the “8” shaped c

Thus, alternating series of north and south magnetic poles are produced in the coils which pulls and pushes the superconducting magnets in the train and hence the train is further moved.

The magnetic levitated train can travel a speed 500 km/hour, which is double the speed of existing fastest train

1.           They are used to construct very sensitive electrical measuring instruments such as galvanometers because they requires very small voltages.

2.           They are used to transmit power over very long distance without any power loss.

1.     They are used to study tiny magnetic signals from brain and heart.

3.     They are used to detect brain tumours and clots using superconductingsolenoids.

4.     They are used in magneto-cardiography, magneto –encephalography.

5.     They are used to study the amount of iron held in the lever of the body accurately.