Sulfate assimilation in plants occurs primarily in the chloroplasts and is then a part of photosynthesis, but it also takes place in the plastids of the roots.

Plants take up sulfate via a specific translocator of the roots, in a manner similar to that described for nitrate . The transpiration stream in the xylem vessels carries the sulfate to the leaves, where it is taken up by a specific translocator, probably a symport with three protons, into the mesophyll cells (Fig. 12.1). Surplus sulfate is transported to the vacuole and is deposited there. 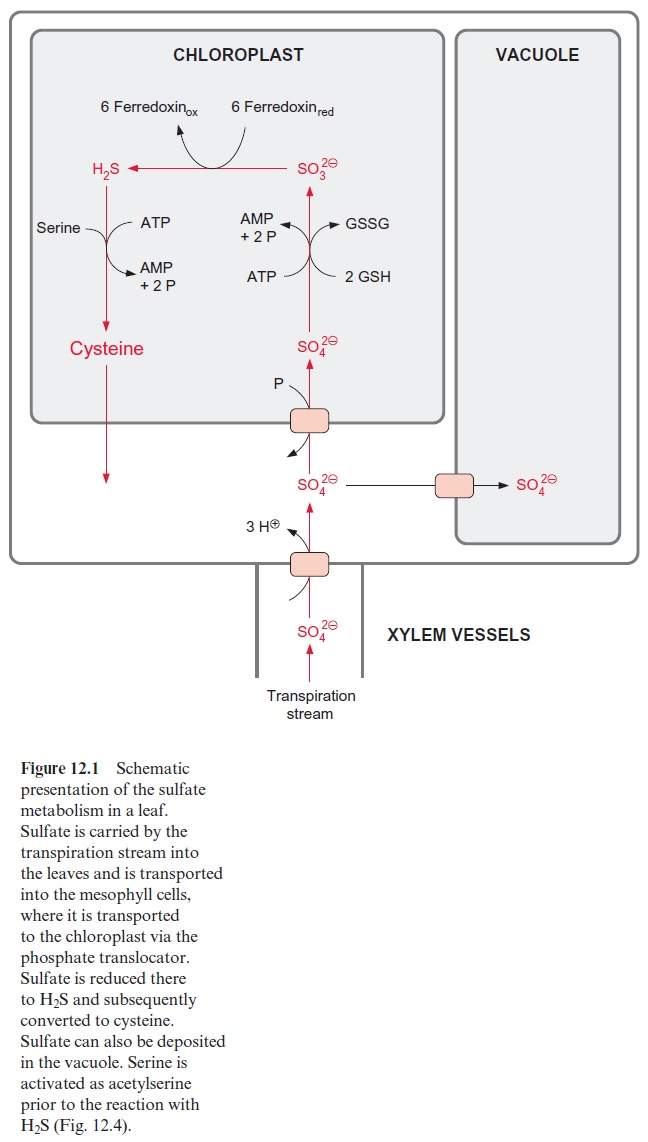 Whereas the NH3 synthesized during nitrite reduction is fixed in the amino acid glutamine (Fig. 10.6), the hydrogen sulfide formed during sulfite reduction is integrated into the amino acid cysteine. A distinguish-ing difference between nitrate assimilation and sulfate assimilation is that the latter requires a much higher input of energy. This is shown in an over-view in Figure 12.1. The reduction of sulfate to sulfite, which in contrast to nitrate reduction occurs in the chloroplasts, requires in total the cleavage of two energy-rich phosphate anhydride bonds, and the fixation of the hydro-gen sulfide into cysteine requires another two. Thus the ATP consumption of sulfate assimilation is four times higher than that of nitrate assimilation. 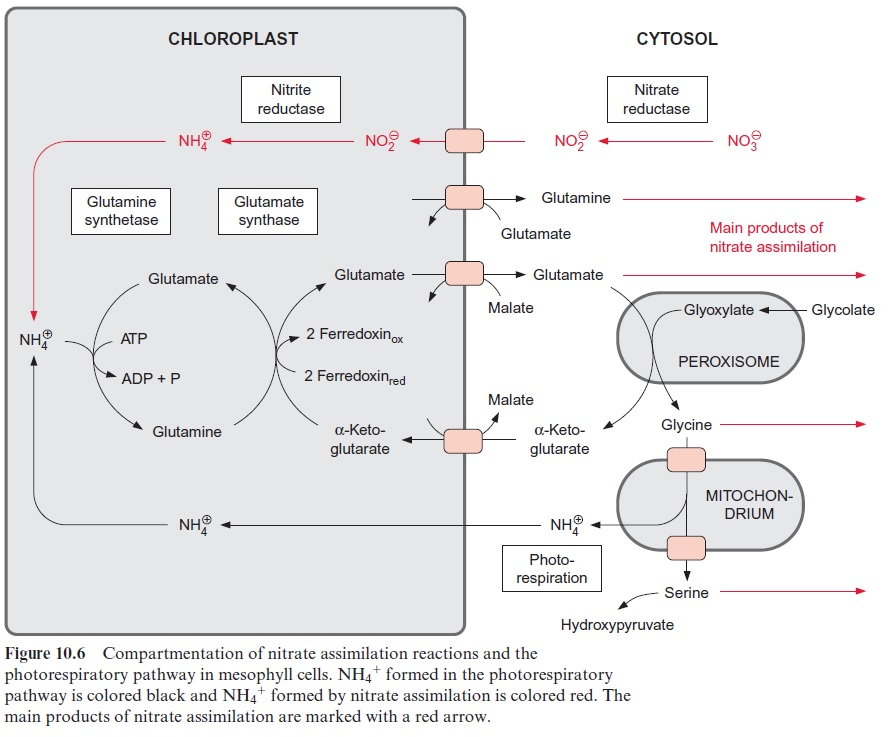 Sulfate is activated prior to reduction

Sulfate is probably taken up into the chloroplasts via the triose phosphate-phosphate translocator  in counter-exchange for phosphate. Sulfate cannot be directly reduced in the chloroplasts because the redox potential of the substrate pair SO32- /SO42- ( ΔE0’= 517 mV) is too high. No reductant is available in the chloroplasts that could reduce SO42- to SO32- in one reaction step. To make the reduction of sulfate possible, the redox potential difference to sulfite is lowered by activation of the sulfate prior to reduction.

As shown in Figure 12.2a, activation of sulfate proceeds via the forma-tion of an anhydride bond with the phosphate residue of AMP. Sulfate is exchanged by the enzymeATP-sulfurylase for a pyrophosphate residue of ATP to form AMP-sulfate (APS). Since the free energy of the hydroly-sis of the sulfate-phosphate anhydride bond ( ΔGo’= -71 kJ/mol) is very much higher than that of the phosphate-phosphate anhydride bond in ATP ( ΔGo’ = -31 kJ/mol), the equilibrium of the reaction lies far towards ATP. This reaction can proceed only because pyrophosphate is withdrawn from the equilibrium by a high pyrophosphatase activity in the chloroplasts. 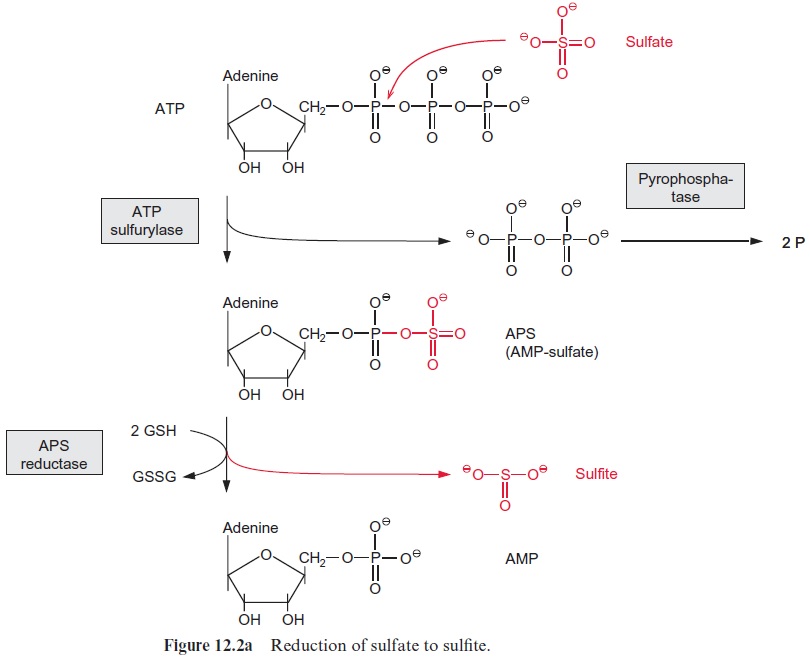 Sulfate present in the form of APS is reduced by glutathione (Figs. 12.5, 3.38) to sulfite. The APS reductase involved in this reaction catalyzes not only the reduction, but also the subsequent liberation of sulfite from AMP. 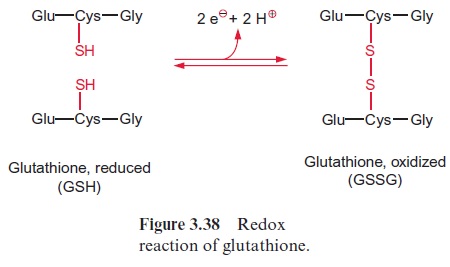 The redox potential difference from sulfate to sulfite is lowered, since the reduction of sulfate is driven by hydrolysis of the very energy-rich sulfite anhydride bond. The mechanism of the APS reductase reaction remains to be elucidated.

Alternatively APS is phosphorylated via APS kinase to 3-phospho AMP sulfate (PAPS) (Fig. 12.2b), resulting in an activation of the sulfate residue. Because of its high sulfate transfer potential PAPS is an important precur-sor for the introduction of sulfate residues into biological molecules such as glucosinolates. 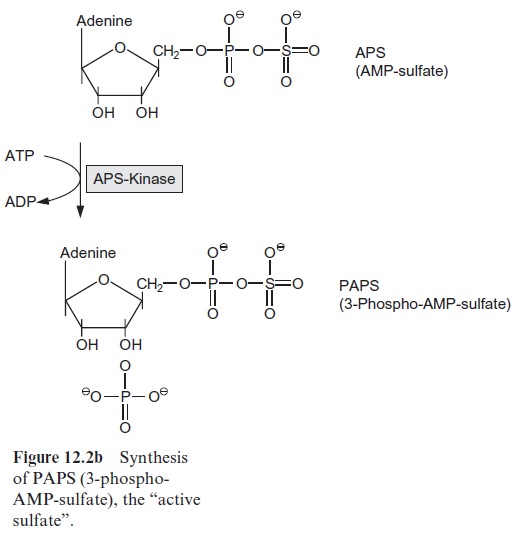 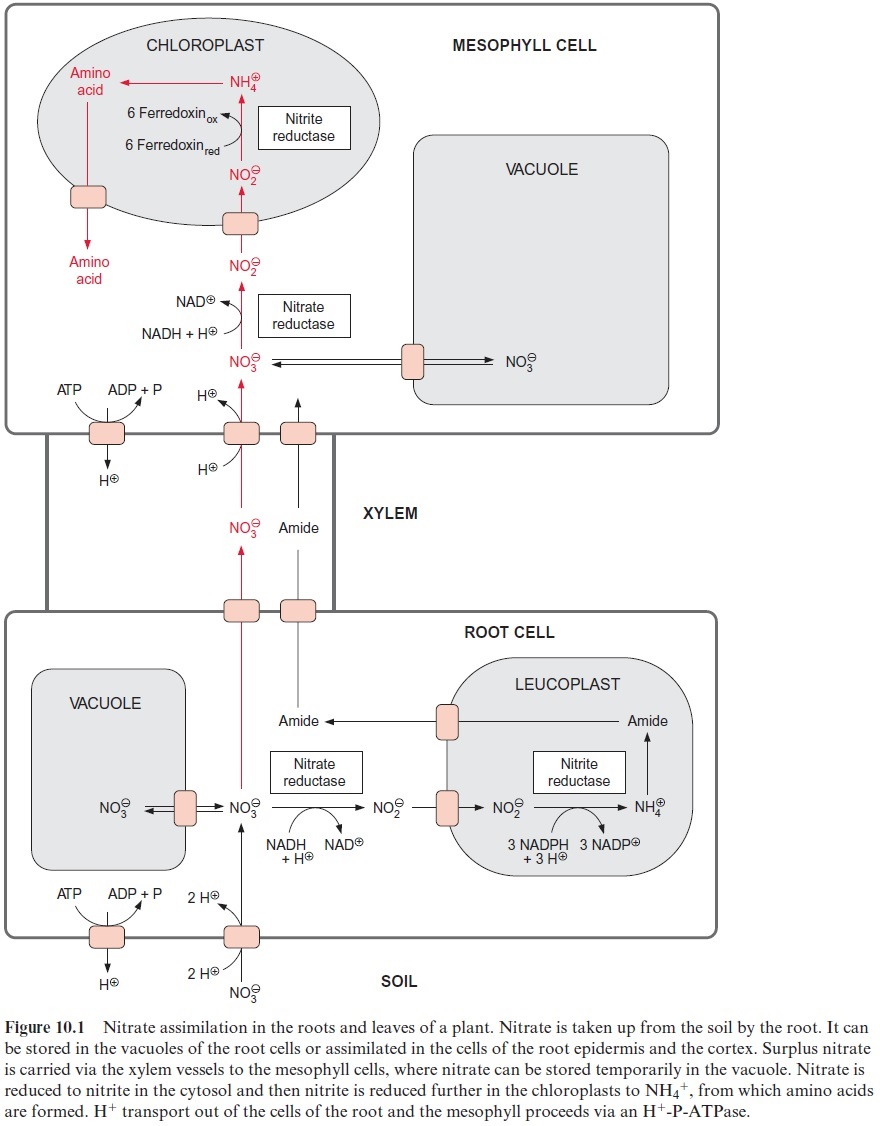 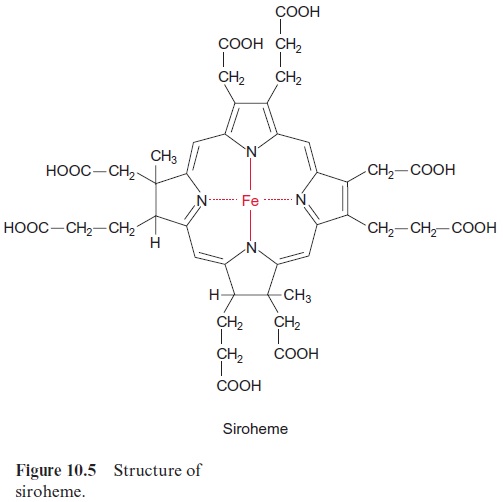 H2S is fixed in the amino acid cysteine

The fixation of the newly formed H2S requires the activation of serine and for this the hydroxyl group of serine is acetylated by acetyl-CoA via a serine transacetylase(Fig. 12.4). The latter is formed from acetate and CoA with the consumption of ATP (which is converted to AMP and pyrophos-phate) by the enzyme acetyl-CoA synthetase. As the pyrophosphate released in this reaction is hydrolyzed by the pyrophosphatase present in the chloro-plasts, the activation of the serine costs the chloroplasts in total two energy-rich phosphates. 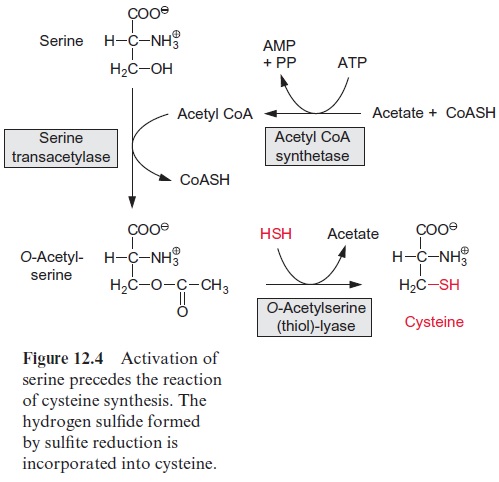 Fixation of H2S is catalyzed by the enzyme O-acetyl serine (thiol) lyase. The enzyme contains pyridoxal phosphate as a prosthetic group and has a high affinity for H2S and acetyl serine. The incorporation of the SH group can be described as a cleavage of the ester linkage by H-S-H. In this way cysteine is formed as the end product of sulfate assimilation. 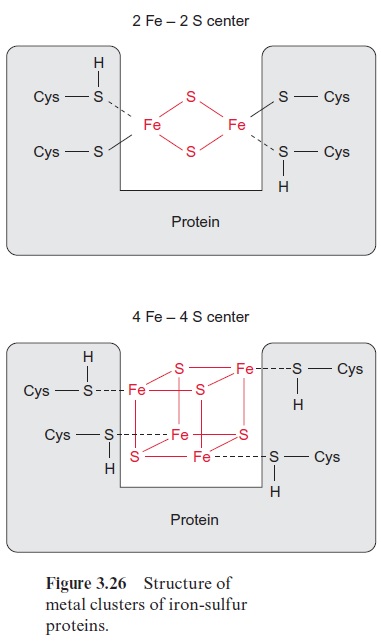 Cysteine has an essential function in the structure and activity of the catalytic site of many enzymes and a replacement by any other amino acids would alter the catalytic properties. Moreover, cysteine residues form iron-sulfur clusters (Fig. 3.26) and are constituents of thioredoxin (Fig. 6.25). 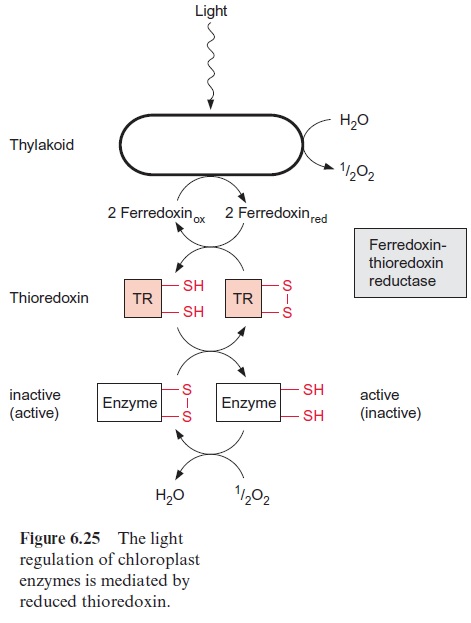