Home | | Plant Biochemistry | Glutathione serves the cell as an antioxidant and is an agent for the detoxification of pollutants
Posted On :  04.08.2017 12:53 am

A relatively large proportion of the cysteine produced by the plant is used for synthesis of the tripeptide glutathione.

A relatively large proportion of the cysteine produced by the plant is used for synthesis of the tripeptide glutathione (Fig. 12.5). The synthesis of glu-tathione proceeds via two enzymatic steps: first, an amide linkage between the γ-carboxyl group of glutamate with the amino group of the cysteine is formed by γ-glutamyl-cysteine-synthetaseaccompanied by the hydrol-ysis of ATP; and second, a peptide bond between the carboxyl group of the cysteine and the amino group of the glycine is produced byglutathione synthetase, again with the consumption of ATP. Glutathione, abbreviated GSH, is present at relatively high concentrations in all plant cells, where it has various functions. The function of GSH as a reducing agent was dis-cussed in a previous section. As an antioxidant, it protects cell constitu-ents against oxidation. Together with ascorbate, it eliminates the oxygen radicals formed as by-products of photosynthesis . In addition, glutathione has a protective function for the plant in forming conjugates with xenobiotics and also as a precursor for the synthesis of phytochelatins, which are involved in the detoxification of heavy metals. Moreover, glu-tathione acts as a reserve for organic sulfur. If required, cysteine is released from glutathione by enzymatic degradation

Xenobiotics are detoxified by conjugation

Toxic compounds produced by the plant or which are taken up (xenobi-otics, including herbicides) are detoxified by reaction with glutathione. Catalyzed by glutathione-Stransferases, the reactive SH group of glutath-ione can form a thioether by reacting with electrophilic carbon double bonds, carbonyl groups, and other reactive groups.Glutathione conjugates (Fig. 12.6) synthesized in this way in the cytosol are transported into the vacuole by a specific glutathione translocator against a concentration gra-dient. In contrast to the transport processes, where metabolite transport against a gradient proceeds by secondary active transport, the uptake of glutathione conjugates into the vacuole proceeds by an ATP-driven primary active transport (Fig. 1.20). This translocator belongs to the superfamily of the ABC-transporter (ATP binding cassette), which is ubiquitous in plants and animals and is also present in bacteria. Various ABC transporters with different specificities are localized in the vacuolar membrane. The imported conjugates are often modified (e.g., by degradation to a cysteine conjugate) and are finally deposited in the vacuole. In this way plants can also detoxify herbicides. Herbicide resistance (e.g., resistance of maize to atrazine) can be due to the activity of a specific glutathione-S transferase. In an attempt to develop herbicides that selectively attack weeds and not crop plants, the plant protection industry has produced a variety of different compounds that increase the tolerance of crop plants to certain herbicides. These pro-tective substances are called safeners. Such safeners, like other xenobiot-ics, stimulate the increased expression of glutathione-Stransferase and of the vacuolar glutathione translocator, resulting in a rapid detoxification of the herbicides in the plants. Formation of glutathione conjugates and their transport into the vacuole is also involved in the deposition of flower pig-ments . 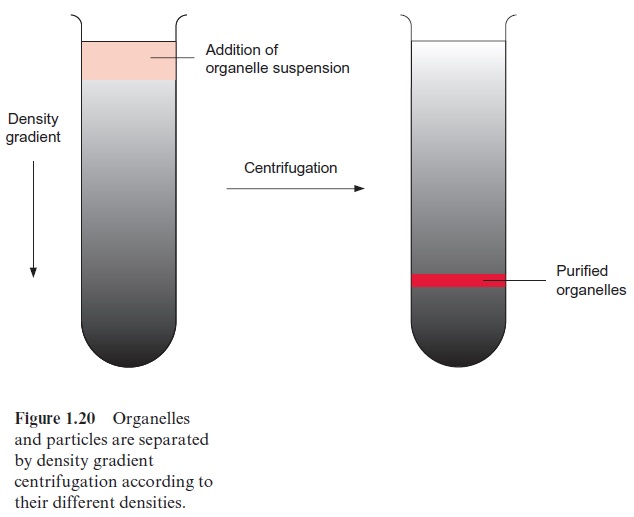 Glutathione is also a precursor for the formation of phytochelatins (Fig. 12.7). Phytochelatin synthase, a transpeptidase, transfers the amino group of glutamate to the carboxyl group of the cysteine of a second glu-tathione molecule, accompanied by liberation of one glycine molecule. The repetition of this process results in the formation of chains of up to 11 Glu-Cys residues with a glycine residue at the carboxyl terminus. Phytochelatins have been found in all plants investigated so far, although sometimes in a modified form as iso-phytochelatins, in which glycine is replaced by serine, glutamate, or β-alanine. 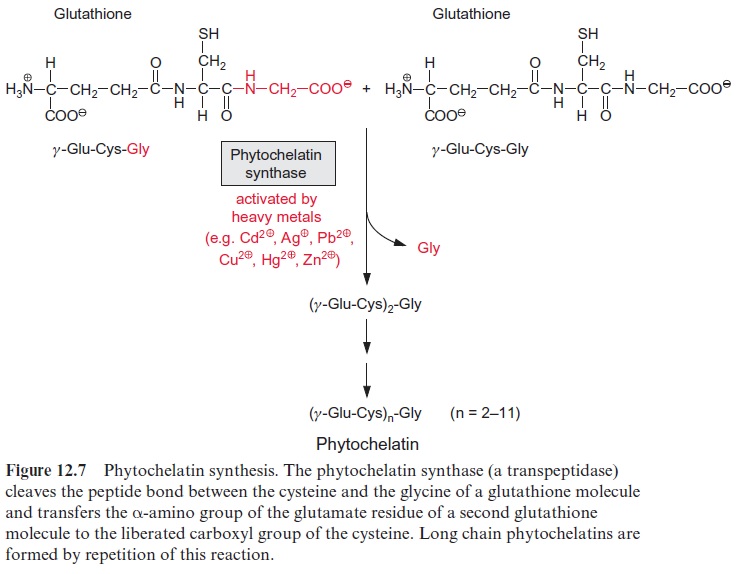 Phytochelatins protect plants against heavy metal poisoning. Mutants of Arabidopsis with a defect in the phytochelatin synthase are extremely sensi-tive to Cd++ . Phytochelations are storage compounds for Cu++ and Zn++ . Through the thiol groups of the cysteine residues, they form tight complexes with metal ions such as Cd++ , Ag+ , Pb++ , Cu++ , Hg++ , and Zn++ as well as with the semimetal As3 (Fig. 12.8). The phytochelatin synthase present in the cytosol is activated by the ions of at least one of the heavy metals listed. Upon the exposure of plants to heavy metals, phytochelatins required for detoxification are immediately de novo synthesized from glutathione.

Exposure to heavy metals can therefore lead to a dramatic depletion of the glutathione reserves in the cell. The phytochelatins loaded with heavy metals are pumped, like the glutathione conjugates, into the vacuoles. This trans-port is ATP dependent. Because of the acidic environment in the vacuole, the heavy metals are liberated from the phytochelatins and finally deposited there as sulfides, often as microcrystalline sulfide complexes.

The capacity of plants to sequester heavy metal ions by binding them to phytochelatins has been utilized in recent times to detoxify soils which are polluted with heavy metals. This procedure, termed phytoremediation, may be important in the future, since it is much less costly than other methods of remediating soils polluted with heavy metals. Plants with a particularly high capacity for heavy metal uptake by roots and for phytochelatin bio-synthesis were developed by breeding or genetical engineering specifically to facilitate this purpose.