In the region of the motor end plate axon terminals are lodged in grooves in the sarcolemma covering the sole plate.

In the region of the motor end plate axon terminals are lodged in grooves in the sarcolemma covering the sole plate. Between the axolemma (over the axon) and the sarcolemma (over the muscle fibre) there is a narrow gap (about 40 nm) occupied by various proteins that form a basal lamina. It follows that there is no continuity between axoplasm and sarcoplasm.

Axon terminals are lodged in grooves in the sarcolemma covering the sole plate. In section (Fig. 4.5) this groove is seen as a semicircular depression. This depression is the primary cleft. The sarcolemma in the floor of the primary cleft is thrown into numerous small folds resulting in the formation of secondary (or subneural) clefts. 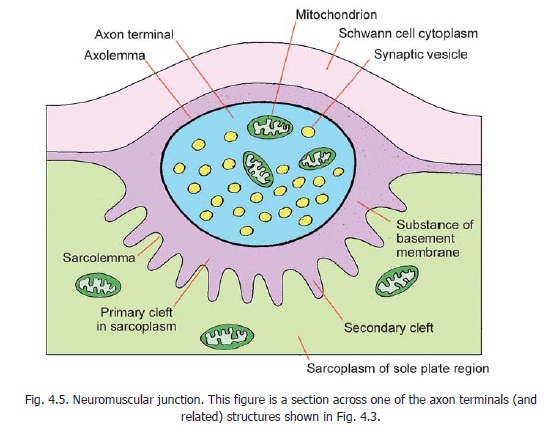 In the region of the sole plate the sarcoplasm of the muscle fibre is granular. It contains a number of nuclei and is rich in mitochondria, endoplasmic reticulum and Golgi complexes.

Nerve fibres innervating smooth muscle are unmyelinated. They end a short distance away from the myocyte surface. (In other words axolemma and sarcolemma do not come into contact). At most places, the nerve fibres are covered by Schwann cell cytoplasm. However, at places this cytoplasm is retracted exposing a segment of the axon. This segment of the axon shows the presence of vesicles. Neurotransmitter released from the vesicles diffuses to the myocytes.

Recently it has been shown that some autonomic terminals contain neither noradrenaline nor acetyl choline. These are described as non-adrenergic non-cholinergic endings. The neurotransmitter present at these endings is probably a purine (adenosine triphosphate). Such fibres have been demonstrated in the walls of the alimentary and urinary tracts, and also in the CNS. These endings are believed to be predominantly inhibitory.

Apart from muscle, effector endings are present in relation to glands (secretomotor endings), to myoepithelial cells, and to adipose tissue.