Preliminary remarks about receptors and their classification

Preliminary remarks about receptors and their classification

The peripheral terminations of afferent fibres are responsible for receiving stimuli and are, therefore, referred to as receptors. Receptors can be classified in various ways.

1.              From a functional point of view receptors can be classified on the basis of the kind of information they provide. They may be of the following types.

a.              Cutaneous receptors are concerned with touch, pain, temperature and pressure. These are also called exteroceptive receptors orexteroceptors.

b.              Proprioceptive receptors (or proprioceptors) provide information about the state of contraction of muscles, and of joint movement and position. This information is necessary for precise control of movement and for maintenance of body posture. By and large these activities occur as a result of reflex action and the information from these receptors may or may not be consciously perceived.

c.               Interoceptive receptors (or interoceptors) are located in thoracic and abdominal viscera and in blood vessels. These include specialised structures like the carotid sinus and the carotid body.

d.              The above three categories also include receptors that are stimulated by damaging influences which are perceived as pain, discomfort or irritation. Such receptors are referred to as nociceptors.

e.               Special sense receptors of vision, hearing, smell and taste are present in the appropriate organs. As these receptors (like those from the skin) provide information about factors external to the body they are in a sense exteroceptors.

2.              Receptors may also be classified on the basis of the manner in which they are stimulated as follows.

b.              Chemoreceptors are stimulated by chemical influences e.g., receptors in taste buds, or in the carotid bodies.

Many receptors are polymodal in that they may respond to more than one kind of stimulus.

3. A third way of classifying receptors is on the basis of their structure. Essentially, most receptors consist of peripheral terminations of sensory nerve fibres that receive the sensory input directly. The somata of the neurons concerned are located in spinal ganglia. As the receptor element is part of a neuron the general term neuronal receptor is applied to them.

At some sites the sensory input is received by an epithelial cell which transmits the same to a peripheral nerve fibre. A synapse-like arrangement is seen at the junction of the epithelial cell with the axon terminal. In distinction to neuronal receptors these are termed epithelial receptors.

In the olfactory epithelium we have neuroepithelial receptors. Here, the receptor cell is a modified neuron that lies within the epithelial lining and directly gives off neuronal processes that travel centrally towards the CNS.

Although the receptor element in a neuronal receptor is a nerve terminal such terminals are often intimately surrounded by epithelial elements as described below.

Depending upon the orientation of these epithelial elements many types of endings have been described, but only the better known of these are given below. In the past, efforts have been made to correlate structural variations with specific sensory modalities. However, it is now realised that one type of sensation may be perceived by more than one variety of receptor. At the same time the same type of ending may subserve different functions in different locations. Finally, it is possible that the same receptor may respond to different kinds of stimuli under different circumstances. In spite of these reservations it appears reasonable to assume that some of the end organs described below are concerned predominantly with particular sensations. It must be remembered, however, that receptors act together and not in isolation and that it is the total pattern of impulses received by the nervous system that determines the nature of the sensations perceived.

For a sensation to be perceived through a receptor three essential steps are involved. Firstly, the receptor terminal has to receive an adequate stimulus. Secondly, the stimulus has to be translated to a change in electrical potential by depolarisation of membrane. Finally, this change in potential has to excite an action potential (in the nerve fibre concerned) that travels to the CNS.

We will now examine the structure of some sensory receptors. These are illustrated in Fig. 4.1. 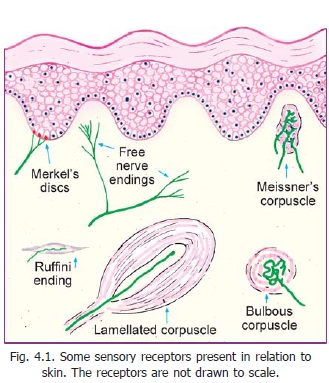