Structure and Function of the Skeletal Muscle System

STRUCTURE AND FUNCTION OF THE SKELETAL MUSCLE SYSTEM

Muscles are attached by tendons (cords of fibrous connective tis-sue) or aponeuroses (broad, flat sheets of connective tissue) to bones, connective tissue, other muscles, soft tissue, or skin. The muscles of the body are composed of parallel groups of muscle cells (fasciculi) encased in fibrous tissue called fascia or epimy-sium. The more fasciculi contained in a muscle, the more precisethe movements. Muscles vary in shape and size according to the activities for which they are responsible. Skeletal (striated) muscles are involved in body movement, posture, and heat-production functions. Muscles contract to bring the two points of attach-ment closer together, resulting in movement.

Each muscle cell (also referred to as a muscle fiber) contains myo-fibrils, which in turn are composed of a series of sarcomeres, the actual contractile units of skeletal muscle. Sarcomeres contain thick myosin and thin actin filaments. Muscle fibers contract in response to electrical stimulation de-livered by an effector nerve cell at the motor end plate. When stim-ulated, the muscle cell depolarizes and generates an action potential in a manner similar to that described for nerve cells. These action potentials propagate along the muscle cell membrane and lead to the release of calcium ions that are stored in specialized organelles called the sarcoplasmic reticulum. When there is a local increase in calcium ion concentration, the myosin and actin filaments slide across one another. Shortly after the muscle cell membrane is de-polarized, it recovers its resting membrane voltage. Calcium is rapidly removed from the sarcomeres by active reaccumulation in the sarcoplasmic reticulum. When calcium concentration in the sarcomere decreases, the myosin and actin filaments cease to inter-act, and the sarcomere returns to its original resting length (relax-ation). Actin and myosin do not interact in the absence of calcium.

Energy is consumed during muscle contraction and relax-ation. The primary source of energy for the muscle cells is adeno-sine triphosphate (ATP), which is generated through cellular oxidative metabolism. At low levels of activity (ie, sedentary ac-tivity), the skeletal muscle synthesizes ATP from the oxidation of glucose to water and carbon dioxide. During periods of strenu-ous activity, when sufficient oxygen may not be available, glucose is metabolized primarily to lactic acid, an inefficient process com-pared with that of oxidative pathways. Stored muscle glycogen is used to supply glucose during periods of activity. Muscle fatigue is thought to be caused by depletion of glycogen and accumula-tion of lactic acid. As a result, the cycle of muscle contraction and relaxation cannot continue.

Relaxed muscles demonstrate a state of readiness to respond to contraction stimuli. This state of readiness, known as muscle tone (tonus), is produced by the maintenance of some of the  muscle fibers in a contracted state. Muscle spindles, which are sense organs in the muscles, monitor muscle tone. Muscle tone is minimal during sleep and is increased when the person is anxious. A muscle that is limp and without tone is described as flaccid; a muscle with greater-than-normal tone is described as spastic. In conditions characterized by lower motor neuron destruction (eg, polio), denervated muscle becomes atonic (soft and flabby) and atrophies.

Muscles accomplish movement by contraction. Through the co-ordination of muscle groups, the body is able to perform a wide variety of movements (Chart 66-1). The prime mover is the mus-cle that causes a particular motion. The muscles assisting the prime mover are known as synergists. The muscles causing move-ment opposite to that of the prime mover are known as antago-nists. An antagonist must relax to allow the prime mover to contract, producing motion. For example, when contraction of the biceps causes flexion of the elbow joint, the biceps is the prime mover, and the triceps is the antagonist. A person with muscle paralysis, which is a loss of movement possibly from nerve dam-age, may be able to retrain functioning muscles within the syner-gistic group to produce the needed movement. Muscles of the synergistic group then become the prime mover. 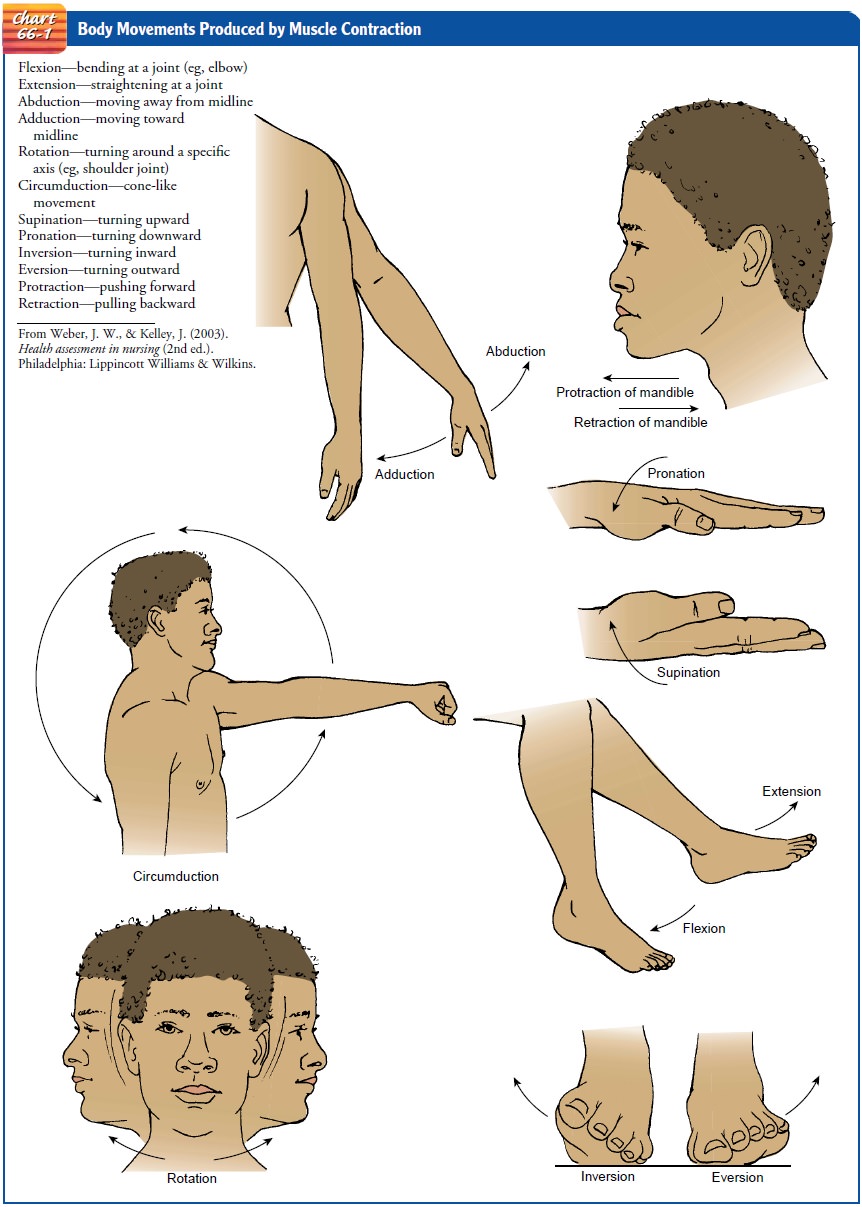 Muscles need to be exercised to maintain function and strength. When a muscle repeatedly develops maximum or close to maxi-mum tension over a long time, as in regular exercise with weights, the cross-sectional area of the muscle increases. This enlargement, known as hypertrophy, results from an increase in the size of in-dividual muscle fibers without an increase in the number of mus-cle fibers. Hypertrophy persists only if the exercise is continued. The opposite phenomenon occurs with disuse of muscle over a long period of time. Age and disuse cause loss of muscular func-tion as fibrotic tissue replaces the contractile muscle tissue. The decrease in the size of a muscle is called atrophy. Bed rest and im-mobility cause loss of muscle mass and strength. When immo-bility is the result of a treatment mode (eg, casting, traction), the patient can decrease the effects of immobility by isometric exer-cise of the muscles of the immobilized part. Quadriceps setting exercises (tightening the muscles of the thigh) and gluteal setting exercises (tightening of the muscles of the buttocks) help main-tain the larger muscle groups that are important in ambulation. Active and weight-resistance exercises of uninjured parts of the body maintain muscle strength. When muscles are injured, they need rest and immobilization until tissue repair occurs. The healed muscle then needs progressive exercise to resume its pre-injury strength and functional ability.

Multiple changes in the musculoskeletal system occur with aging (Table 66-1). Bone mass peaks at about 35 years of age, after which there is a universal gradual loss of bone. There is a loss of height due to osteoporosis (abnormal excessive bone loss), kypho-sis, thinned intervertebral disks, and flexion of the knees and hips. Numerous metabolic changes, including menopausal withdrawal of estrogen and decreased activity, contribute to osteoporosis. Women lose more bone mass than men do. Additionally, bones change in shape and have reduced strength. Fractures are common. In the elderly, collagen structures are less able to absorb en-ergy. Ligaments become weak. The articular cartilage degenerates in weight-bearing areas and heals less readily. This contributes to the development of osteoarthritis. Joints enlarge and range of motion decreases. Muscle mass and strength are also diminished. There is an actual loss in the size and number of muscle fibers due to myofibril atrophy with fibrous tissue replacement. Increased in-activity, diminished neuron stimulation, and nutritional defi-ciencies contribute to loss of muscle strength. In addition, remote musculoskeletal problems for which the patient has compensated may become new problems with age-related changes. For example, people who have had polio and who have been able to function normally by using synergistic muscle groups may discover increas-ing incapacity because of a reduced compensatory ability. Many of the effects of aging, however, can be slowed if the body is kept healthy and active through positive lifestyle behaviors. 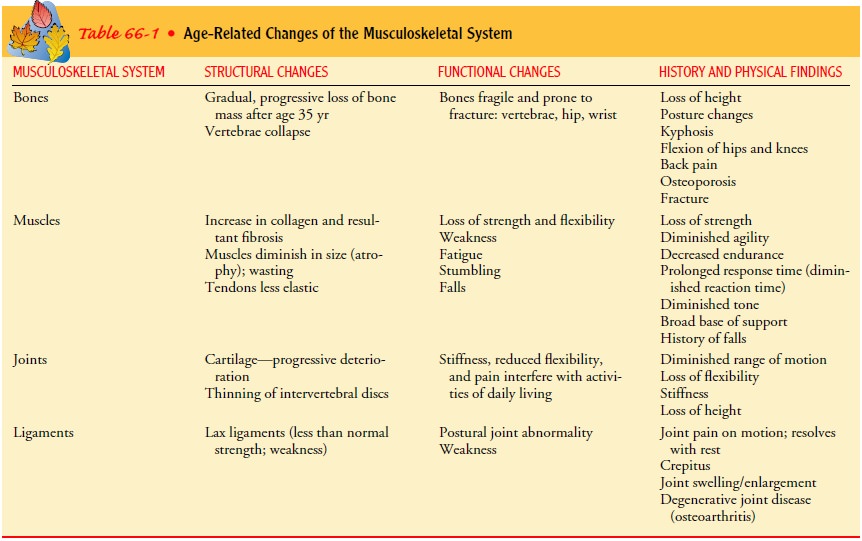