These are the two basic methods by which an indeterminate skeletal structure is analyzed. In these methods flexibility and stiffness properties of members are employed. These methods have been developed in conventional and matrix forms. Here conventional methods are discussed.

Forces should be in equilibrium

Displacement of a structure should be compatable

The compatibility conditions for the supports can be given as

Determinate structures can be solving using conditions of equilibrium alone (?H=0;?V=0 ;?M=0). No other conditions are required.

The indeterminacy of a structure is measured as statically (?s) or kinematical (?k) Indeterminacy.

Incompletely stiff structure thereisnorelease present. In singly connected system of rigid foundation members there is only one route between any two points  in which tracks are not retraced. The system is considered comprising of closed rings or loops.

R = Number of loops or rings in completely stiff structure. r = Number of releases in the system.

P = 6 and 3 for space and plane truss respectively

N= Number of nodes in truss.

NDOF = Degrees of freedomat node which is 2 for plane truss and 3 for space truss. For space truss?s=M- 3N+ 6

If ?s> 0 Structure is statically indeterminate

If ?s= 0 Structure is statically determinate

and if?s<0 Structure is a mechanism.

It may be noted that structure may be mechanism even if ?s >0 if thereleases are present in such away so as to cause collapse as mechanism. The situation of mechanism is unacceptable.

It is difference of the unknown forces (internal forces plusexternal reactions) and the equations of equilibrium.

It is the number of possible relative displacement softhenodes in the directions of stress resultants.

·          Solve  statically indeterminate beams of degree more than one.

·        To compute internal resisting bending moment at any section of the continuous beam.

Calculate the support reactions in the continuous beam ABC due to loading as shown in Fig.1.1 Assume EI to be constant throughout. 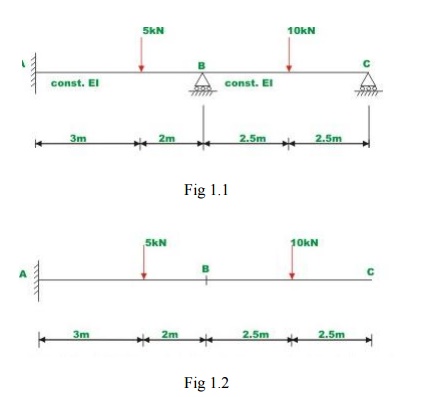 Select two reactions vise, at B(R1 ) and C(R2 ) as redundant, since the given beam is statically indeterminate to second degree. In this case the primary structure is a cantilever beam AC. The primary structure with a given loading is shown in Fig. 1.2

In the present case, the deflections (? L)1 and (? L) 2 of the released structure at B and C can be readily calculated by moment-area method. Thus

For the present problem the flexibility matrix is,

Substituting the value of E and I in the above equation, 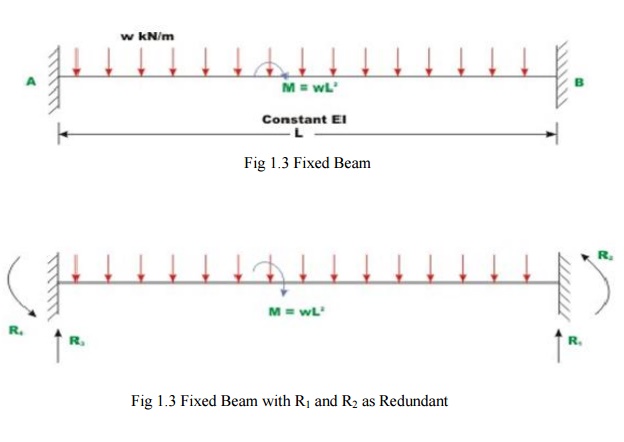 Select vertical reaction (R1)and the support moment(R2) at    B as the redundant. The primary structure in this case is acantilever beam which could  be obtained by releasing the redundant  R1  andR2. 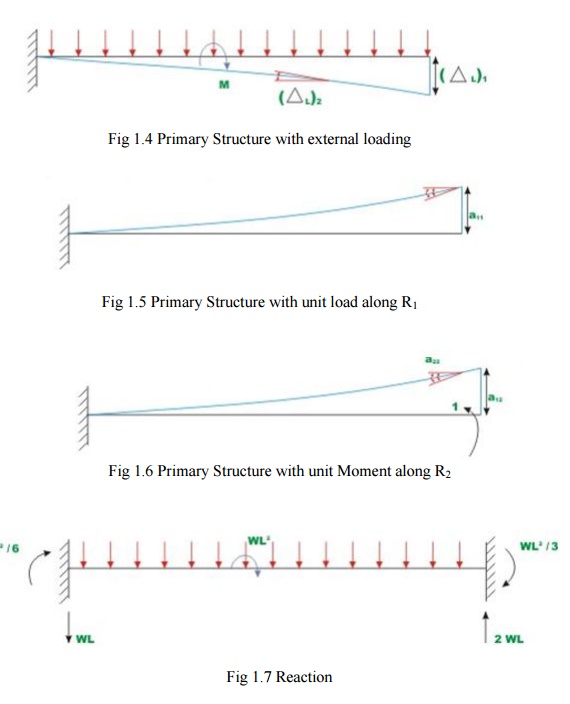 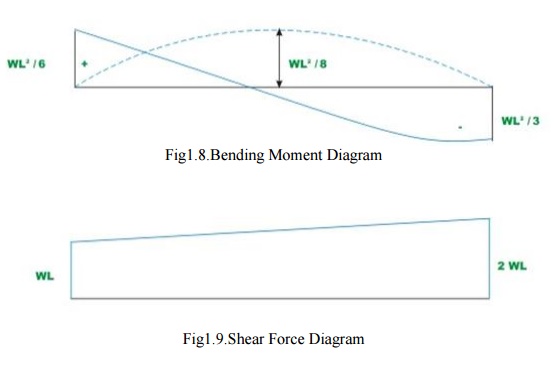 The deflection(? L1)and(? L2)of the released structure can be evaluated from unit load method. Thus,

The negative sign indicates that ( L )is downwards and rotation( is   1 L2) clockwise.

A continuous beam ABC is carrying a uniformly distributed load of 1 kN/m in addition to a concentrated load of 10kN as shown in Fig.7.5a, Draw bending moment and shear force diagram. Assume EI to be constant for all members. 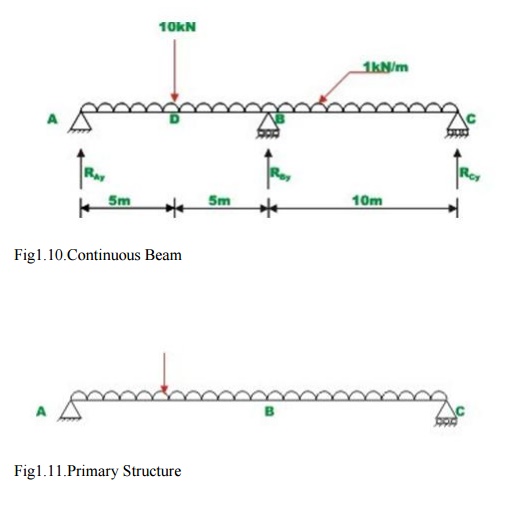 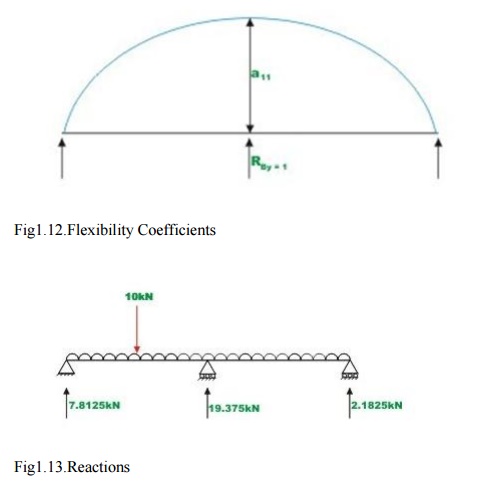 It is observed that the continuous beam is statically indeterminate to first degree. Choose the reaction at B, RBy as the redundant. The primary structure is a simply supported beam as shown in Fig.1.11. Now, compute the deflection at B, in the released structure due to uniformly distributed load and concentrated load. This is accomplished by unit load method. Thus,

In thenextstep, apply a unit load at B in the direction of

Calculate the deflection at B of the following structure. Thus(seeFig.7.5c),

Now, deflection at B in the primary structure due to redundant       RB  is,

In the actual structure, the deflection at B is zero. Hence, the compatibility equation may be written as

The other two reactions are calculated by static equilibrium equations (videFig.