S. stercoralis adults measureonly2 mminlength, makingthem thesmallest of the intesti-nal nematodes. The male is seldom seen within the human host, leading some authorities to believe that the female can conceive parthenogenetically in this environment. Be that as it may, the gravid female penetrates the mucosa of the duodenum, where she deposits her eggs. In severe infections, the biliary and pancreatic ducts, the entire small bowel, and the colon may be involved. The eggs hatch quickly, releasing rhabditiform larvae that reenter the bowel lumen and are subsequently passed into the stool. These larvae, which measure about 16 by 200 m, can be distinguished from the similar larval stage of the hookworms by their short buccal cavity and large genital primordium (Figs 55 – 5 and 55 – 6). 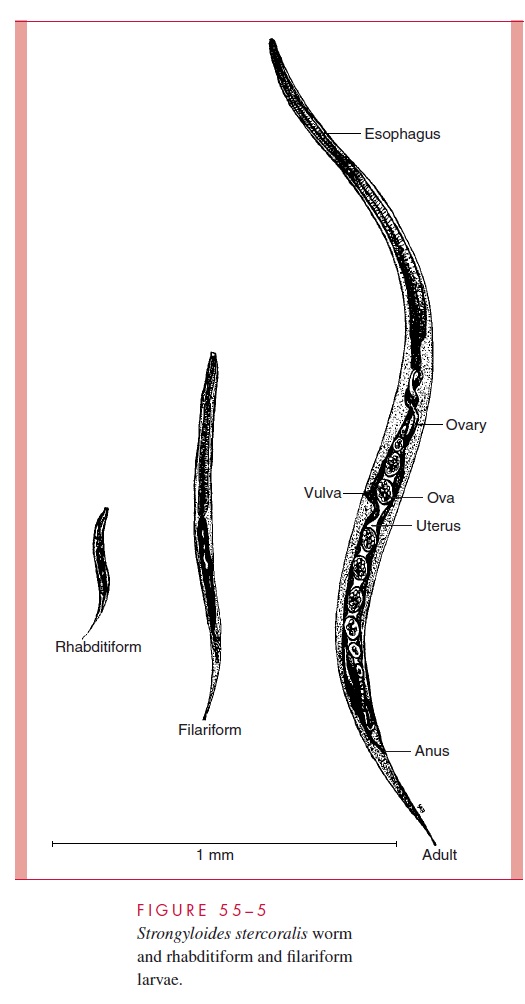 Three different life cycles have been described for this nematode. The first, or direct cy-cle, is similar to that observed with the hookworms. After rhabditiform larvae are passed in the stool, they molt on soil to become filariform larvae. Filariform larvae can penetrate human skin. After transport to the lung in the vascular system, they are coughed up, swal-lowed and then mature to adults in the small bowel. In the second, or autoinfective cycle, the rhabditiform larva’s passage through the colon to the outside world is delayed by con-stipation or other factors, allowing it to transform into an infective filariform larva while still within the body of its host. This larva may then invade the internal mucosa (internal autoinfection) or perianal skin (external autoinfection) without an intervening soil phase. Thus, S. stercoralis, unlike any of the other intestinal nematodes, has the capacity to mul-tiply within the body of the host. The worm burden may increase dramatically, and the in-fection persist indefinitely, without the need for reinfection from the environment, often with dire consequence to the host. In the third, or free-living cycle, the rhabditiform lar-vae, after passage in the stool and deposition on the soil, develop into free-living adult males and females. These adults may propagate through several generations of free-living worms before infective filariform larvae are again produced. This cycle creates a soil reservoir that may persist even without continued deposition of feces. 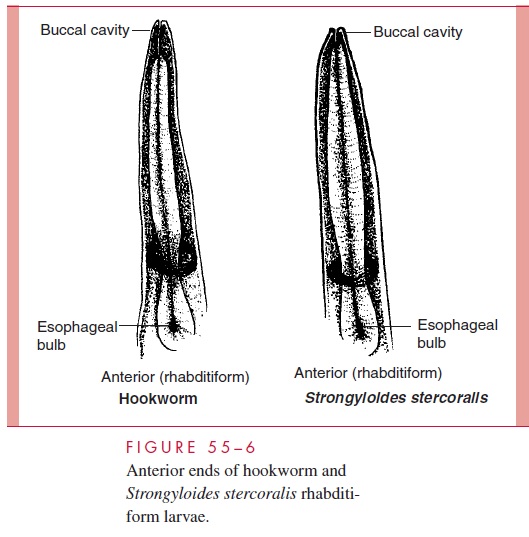