In all areas of research, statistical analysis of results and data plays a pivotal role. This section is intended to give students some of the very basic concepts of statistics as it relates to research methodology.

In all areas of research, statistical analysis of results and data plays a pivotal role. This section is intended to give students some of the very basic concepts of statistics as it relates to research methodology.

Accuracy is a term used to describe the extent to which a measurement is close to the true value, and

it is commonly estimated as the difference between the reported result and the actual value (Figure 13.1).

Reliability or reproducibility refers to the consistency or repeatability of a measure. Reliability does not imply validity. A reliable measure is measuring some-thing consistently, but not necessarily estimating its true value. If a measurement error occurs in two sepa-rate measurements with exactly the same magnitude and direction, this measurement may be fully reliable but invalid. The kappa inter-rate agreement statistic (for categorical variables) and the intraclass cor-relation coefficient are frequently used to assess reliability.

Precision is described as the quality of being sharply defined or stated; thus, sometimes precision is indi-cated by the number of significant digits in the measurement.

In a more restricted statistical sense, precision refers to the reduction in random error. It can be improved either by increasing the size of a study or by using a design with higher efficiency. For example, a better balance in the allocation of exposed and unexposed subjects, or a closer matching in a case– control study usually obtains a higher precision without increasing the size of the study. 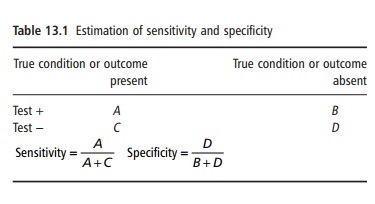 Statistics may have either a descriptive or an inferen-tial role in nutrition research. Descriptive statistical methods are a powerful tool to summarize large amounts of data. These descriptive purposes are served either by calculating statistical indices, such as the mean, median, and standard deviation, or by using graphical procedures, such as histograms, box plots, and scatter plots. Some errors in the data col-lection are most easily detected graphically with the histogram plot or with the box-plot chart (box-and-whisker plot). These two graphs are useful for describ-ing the distribution of a quantitative variable. Nominal variables, such as gender, and ordinal variables, such as educational level, can be presented simply tabulated as proportions within categories or ranks. Continuous variables, such as age and weight, are customarily presented by summary statistics describ-ing the frequency distribution. These summary statis-tics include measures of central tendency (mean, median) and measures of spread (variance, standard deviation, coefficient of variation). The standard deviation describes the “spread” or variation around the sample mean.

where the vertical bar (|) means “conditional to.” In a more concise mathematical expression:

A large p-value indicates that the data are compatible with the null hypothesis. Many authors accept that a p-value lower than 0.05 provides enough evidence to reject the null hypothesis. The use of such a cut-off for p leads to treating the analysis as a decision-making process. Two possible errors can be made when making such a decision (Table 13.2).

The power of a study is the probability of obtaining a statistically significant result when a true effect of a specified size exists. The power of a study is not a single value, but a range of values, depending on the assumption about the size of the effect. The plot of power against size of effect is called a power curve. The calculations of sample size are based in the prin-ciples of hypothesis testing. Thus, the power of a study to detect an effect of a specified size is the com-plementary of beta (1 − β). The smaller a study is, the lower is its power. Calculation of the optimum sample size is often viewed as a rather difficult task, but it is an important issue because a reasonable certainty that the study will be large enough to provide a precise answer is needed before starting the process of data collection.

The necessary sample size for a study can be estimated taking into account at least three inputs:

●the expected proportion in each group and, conse-quently, the expected magnitude of the true effect

●the beta error (or alternatively, the power) that is required

The p-value has been the subject of much criticism because a p-value of 0.05 has been frequently and arbitrarily misused to distinguish a true effect from lack of effect. Until the 1970s most applications of statistics in nutrition and nutritional epidemiology focused on classical significance testing, involving a decision on whether or not chance could explain the observed association. But more important than the simple decision is the estimation of the magnitude of the association. This estimation includes an assess-ment about the range of credible values for the asso-ciation. This is more meaningfully presented as a confidence interval, which expresses, with a certain degree of confidence, usually 95%, the range from the smallest to the largest value that is plausible for the true population value, assuming that only random variation has created discrepancies between the true value in the population and the value observed in the sample of analyzed data.

Different statistical procedures are used for describing or analyzing data in nutritional epidemiology (Table 13.3). The criteria for selecting the appropriate procedure are based on the nature of the variable considered as the outcome or dependent variable. Three main types of dependent variable can be considered: quantitative (normal), qualitative (very often dichotomous), and survival or time-to-event variables. 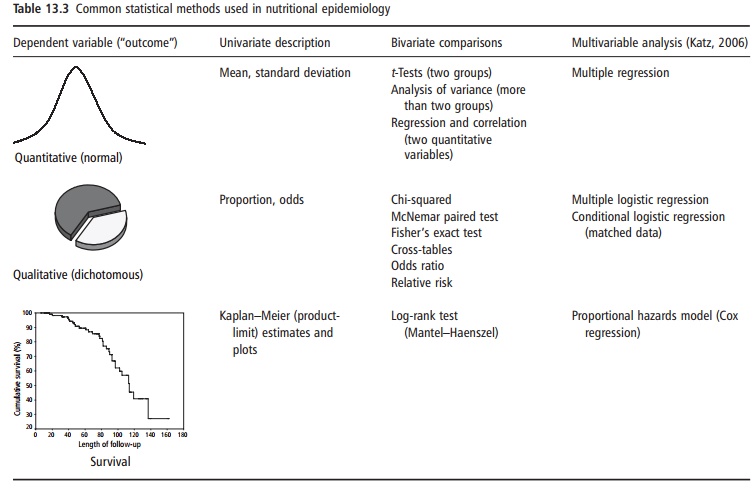 The validity of most standard tests depends on the assumptions that:

●the data are from a normal distribution

●the variability within groups (if these are com-pared) is similar.

Tests of this type are termed parametric and are to some degree sensitive to violations of these assump-tions. Alternatively, nonparametric or distribution-free tests, which do not depend on the normal distribution, can be used.

Nonparametric tests are also useful for data collected as ordinal variables because they are based on ranking the values. Relative to their parametric counterparts, nonparametric tests have the advantage of ease, but the disadvantage of less statistical power if a normal distribution should be assumed. Another additional disadvantage is that they do not permit confidence intervals for the differ-ence between means to be estimated.

A common problem in nutrition literature is mul-tiple significance testing. Some methods to consider in these instances are analysis of variance together with multiple-comparison methods specially designed to make several pairwise comparisons, such as the least significant difference method, the Bonferroni and Scheffé procedures, and the Duncan test. Analysis of variance can also be used for replicate measure-ments of a continuous variable.

To describe the relationship between two continu-ous variables, the mathematical model most often used is the straight line. This simplest model is known as simple linear regression analysis. Regression analysis is commonly used not only to quantify the association between two variables, but also to make predictions based on the linear relationship. Nowa-days, nutritional epidemiologists frequently use the statistical methods of multivariable analysis (Table 13.3). These methods usually provide a more accurate view of the relationship between dietary and non-dietary exposures and the occurrence of a disease or other outcome, while adjusting simultaneously for many variables and smoothing out the irregularities that very small subgroups can introduce into alterna-tive adjustment procedures such as stratified analysis (Katz, 2006).

Most multivariate methods are based on the concept of simple linear regression. An explanation of the variation in a quantitative dependent variable (outcome) by several independent variables (expo-sures or predictors) is the basis of a multiple-regression model. However, in many studies the dependent variable or outcome is quite often dichoto-mous (diseased/nondiseased) instead of quantitative and can also be explained by several independent factors (dietary and nondietary exposures). In this case, the statistical multivariate method that must be applied is multiple logistic regression. In follow-up studies, the time to the occurrence of disease is also taken into account. More weight can be given to earlier cases than to later cases. The multivariate method most appropriate in this setting is the pro-portional hazards model (Cox regression) using a time-to-event variable as the outcome (Table 13.3).