Whole animal systems have been used in measuring the utilization, function, and fate of nutrients.

Whole animal systems have been used in measuring the utilization, function, and fate of nutrients.

Thus, a part of our knowledge regarding nutrition concepts stems from animal experiments, which are often extrapolated to humans and referred to as animal models. There are many reasons for choosing an animal study over a human study. We can and do subject animals to experimental conditions that we would ethically not be allowed to apply to humans. For example, to study the manner in which a nutrient influences the scale and histopathology of atheroscle-rosis, animal studies are needed. Just as studies with humans are governed by the rules of ethics commit-tees, so too are studies with animals. These rules involve the regulation of facilities, accommodation and animal care, competence, alternatives to animal experimentation, anesthesia and euthanasia proce-dures, registration, supply of animals, and the involve-ment of an ethical committee.

In general, the use of animals as models for human nutrition research can be examined from three aspects:

●      the experimental diet and its delivery

Many species have been used in the study of nutrition. Many are pure-bred strains such as the Wistar rat, the Charles River mouse, or the New Zealand white rabbit. Some animal models have been specially selected to exhibit particular traits, making them very useful models for research. The Wattanable rabbit has defective low-density lipoprotein (LDL) receptor function, making this animal model very useful for studying the role of diet in influencing LDL receptor-mediated arterial disease. The ob/ob mouse develops gross obesity because of an alteration in a genetic profile (leptin synthesis). In recent times there has been a rise in the use of transgenic animal models that have been produced through advanced molecular genetic techniques. In such models, specific genes can be inserted or deleted to fulfill specific functions. For example, the peroxisome proliferator-activated recep-tor-alpha (PPAR-α) is not expressed in one knockout mouse model, giving rise to fat accumulation. Another example of a transgenic mouse presents an overex-pression of the Cu/Zn-superoxide dismutase enzyme.

The experimental diet and its delivery

The nature of the diet and its mode of delivery are centrally important in understanding the role of animal models in human nutrition issues. There are several types of diets offered to laboratory animals.

Commercially available diets made to internation-ally accepted nutritional norms are often referred to as chow diets or laboratory chow. For the vast majority of laboratory animals in studies where nutrient intake is not the central area of interest, such chow diets are used. However, when nutrition is the area of research, special diets will almost always have to be formulated. The type of diet that needs to be formulated will depend on the nature of the research question.

Terms such as semipurified, purified, and chemi-cally defined diets are often used but frequently it is difficult to know exactly which type of term fits dif-ferent formulations. The least refined experimental diet uses ingredients such as barley, soybean, and wheat. An example is given in Table 13.5, taken from a study of rapeseed glucosinolates on the iodine status of piglets. 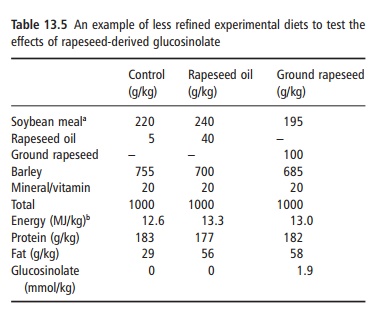 The purpose of the study was to assess the effects of glucosinolate derived from ground rapeseed. A direct comparison between the ground rapeseed and the control is not possible because the ground rape-seed contains twice as much fat as the controls. Thus, the rapeseed oil diet is included because it contains no glucosinolate, but the same amount of fat as the control diet. The ingredients used in these diets, in general, contain several nutrients. Thus, the main ingredient, barley, contains protein, carbohydrate, and fat as well as fiber and micronutrients. That can create problems when there is a need to examine the effects of specific nutrients, such as fatty acids. The fatty acids naturally present in barley cannot be ignored. In the case of the rapeseed oil diet in Table 13.5, 40 g of the 56 g of fat per kilogram of diet comes from the rapeseed oil, but 16 g (or 28.6%) comes from barley lipid. 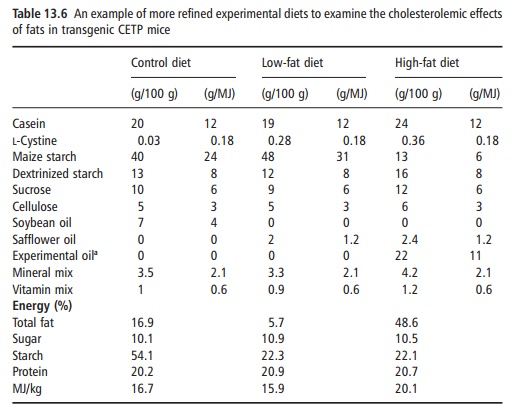 To deal with this, more refined diets are used. An example of such a diet is given in Table 13.6. In this instance, the authors were examining how different dietary fats influence blood cholesterol in normal mice and in transgenic mice not expressing the gene for the cholesteryl ester transfer protein (CETP), which is a key protein in lipid metabolism. In this instance, the ingredients are almost all pure. Thus, casein is pure protein and nothing else. Similarly, sucrose is pure carbohydrate and cellulose is pure fiber. The diets differ only in the source of fat. The high-fat diet obviously has more fat and thus more energy per kilogram of diet. It is thus critically impor-tant to note that as the energy density goes up, most other things must also go up to ensure a common concentration, not on a weight-for-weight basis but on a weight-for-energy basis. A simple illustration is the level of the mineral mix used: 2.5 g/100 g in the control diet, 3.2 g/100 g in the low-fat diet and 4.2 g/100 g in the high-fat diet. But when considered on a weight-for-energy basis, all five diets contain 2.0 g/MJ. The only changes are in fat and in maize starch, which always vary in opposite directions.

Variations in diet composition are often the key for the design of nutrition experiments. In this context, different feeding regimens can be applied to labora-tory animals depending on scientific criteria. In ad libitum feeding the animals have free access to food; in controlled feeding animals are offered a limited amount of food (restricted feeding) or receive as much food as can be fed to them (forced feeding). A specific form of restricted feeding is pair feeding, which involves the measurement of food consumed by some animals to match or equalize the intake of a test group on the following day. There are many reasons why pair feeding is critically important. An experiment may seek to examine how a new protein source, rich in some nutrient of interest, influences some aspect of metabolism. Let us consider a com-pound in the protein source that may reduce blood

LDL cholesterol. A control diet is constructed based on casein. In the experimental diets, this casein is replaced on an isonitrogenous basis with the test protein source. Otherwise the diets are identical. After several weeks of ad libitum feeding a blood sample is taken and the results show that blood cholesterol rose with the experimental diet. Then the researcher begins to look at other data and observes that growth rates in the control rats were far higher than in the experi-mental group because the latter had a much lower food intake. Quite simply, the new protein source was unpalatable. The experiment will now have to be carried out as a pair-fed study. The food intake of rats given the experimental diet will be measured each day. On the following day the control rats will be rationed to that amount. Food intakes and probably growth rates are identical. Only the protein source differs. Now the researcher can truly reach conclu-sions as to the effect of the new protein source on LDL cholesterol metabolism. The intake or supply of nutrients may be administered orally, intravenously, intraperitoneally, or by means of some specific tools (gavage, stereotaxis, etc.).

The outcome or variables of interest to be assessed condition the experimental techniques to be applied, which may include growth curves, nutrient and energy balance, nutrient utilization and signalling, etc., using cellular, molecular or other strategies.

Another approach to investigate nutritional pro-cesses is to overexpress, inactivate, or manipulate specific genes playing a role in body metabolism (Campión et al. 2004). These new technologies allow the study of the regulation and function of different genes. The current standard methods for manipulat-ing genes in nutrition research depend on the method of introducing/blocking genes. Thus, genetic manip-ulation can be sustained for generations by creating germline transmission. In this way, there are examples of transgenic animals, overexpressing or knocking out genes, but still controlling this gene manipulation in a spatial or temporal manner. However, when the aim is not to transfer genetic information to subsequent generations, the most usual method is gene transfer to somatic cells. Different viral and nonviral vectors are used for the in vivo gene transfer, allowing a tran-sient or permanent overexpression of the gene of interest. The RNAi (interference) approach allows the creation of new in vivo models by transient ablation of gene expression by degrading target mRNA. More-over, by inserting RNAi encoding sequences in the genome, permanent silencing of the target gene can be obtained. Undoubtedly, new models of investiga-tion will be developed, combining the different genetic manipulation techniques to achieve the creation of new models to understand the function and the regu-lation of metabolism, nutritional, and disease-related genes. Indeed, research concerning inhibiting/activat-ing the expression of different genes (transgenic/ knockout animals), gene transfer, and RNAi applica-tion is allowing us to specifically investigate functions and metabolism of regulatory processes.