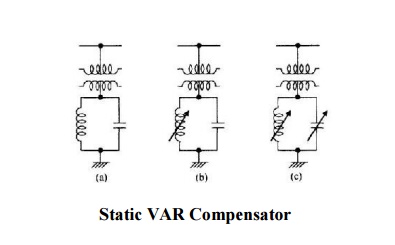 Ø   Some possible configurations are shown in above Figure.

Ø   Even though the capacitors and reactors in are shown in figure connected to the low voltage side of a down transformer, the capacitor banks may be distributed between high and low voltage buses.

Ø   The capacitor bank often includes, in part, harmonic filters which prevent the harmonic currents from flowing in the transformer and the high voltage system.

Ø    Filters for the 5th and 7th harmonics are generally provided.

Ø   The thyristor controlled reactor (TCR) is operated on the low voltage bus.

Ø   In another form of the compensator illustrated in Figure the reactor compensator is connected to the secondary of a transformer. 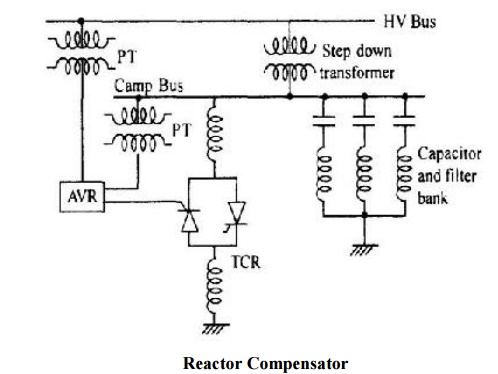 Ø   With this transformer, the reactive power can be adjusted to anywhere between 10% to the rated value.

Ø   With a capacitor bank provided with steps, a full control range from capacitive to inductive power can be obtained.

Ø   The reactor's transformer is directly connected to the line, so that no circuit breaker is needed.

Ø   The primary winding is star connected with neutral grounded, suitable to the thyristor network.

Ø   The secondary reactor is normally nonexistent, as it is more economical to design the reactor transformer with 200% leakage impedance between primary and secondary windings.

Ø   The capacitor bank is normally subdivided and connected to the substation bus bar via one circuit breaker per sub bank.

Ø   The regulator generates firing pulses for the thyristor network in such a way that the reactive power required to meet the control objective at the primary side of the compensator is obtained.

Ø   The reactor transformer has a practically linear characteristic from no load to full load condition.

Thus, even under all stained over voltages; hardly any harmonic content is generated due to saturation.

Ø    The transformer core has non ferromagnetic .Gaps to the required linearity.

The following requirements are to be borne in mind while designing a compensator.

1.  Reaction should be possible, fast or slow, whenever demanded. No switching of capacitor should take place at that time to avoid additional transients in the system. Commutation from capacitor to reactor and vice versa should be fast.

2.  No switching of the capacitors at the high voltage bus bar, so that no higher frequency Transients is produced at EHV level.

3.  Elimination of higher harmonics on the secondary side and blocking them from entering the system. 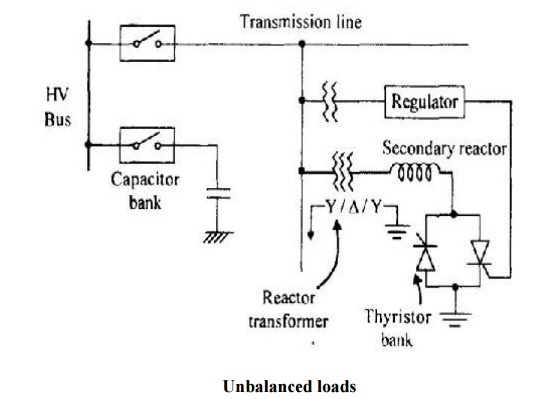 Ø    For a limited range of operation the relationship between the inductive current iL and the applied voltage V is represented in Figure. As the inductance is varied, the susceptance varies over a range within the limits BLmin and BLmax (corresponding to XLmax and XLmin) while the voltage Changes by v volts. 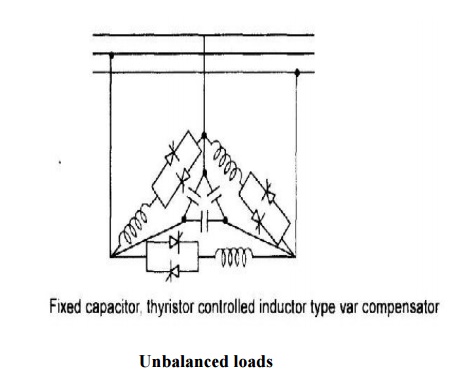 Ø   The current flowing in the inductance would be different in each half cycle, varying with the conduction angle such that each successive half cycle is a smaller segment of a sine wave.

Ø   The fundamental component of inductor current is then reduced to each case.

Ø   Quick control can be exercised within one half cycles, just by giving a proper step input to the firing angle control Static var compensators when installed reduce the voltage swings at the rolling mill and power system buses in drive system applications.

Ø   They compensate for the average reactive power requirements and improve power factor.

Ø   The three phases of a static var compensator can be located independently so that it compensates for the unbalanced reactive load of the furnace and the thyristor controller will respond quickly in order to minimize the voltage fluctuations or voltage flicker seen by the system. 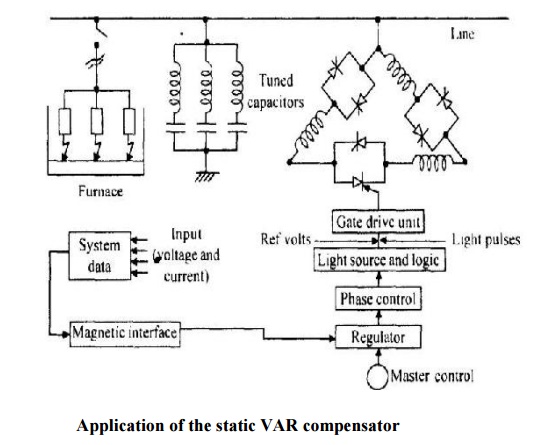 Ø   Thus, the furnace characteristics are made more acceptable to the power system by the static var compensator.

Ø   Above figure shows the application of the static var compensator to an arc furnace installation for reactive power compensation at the HV bus level.