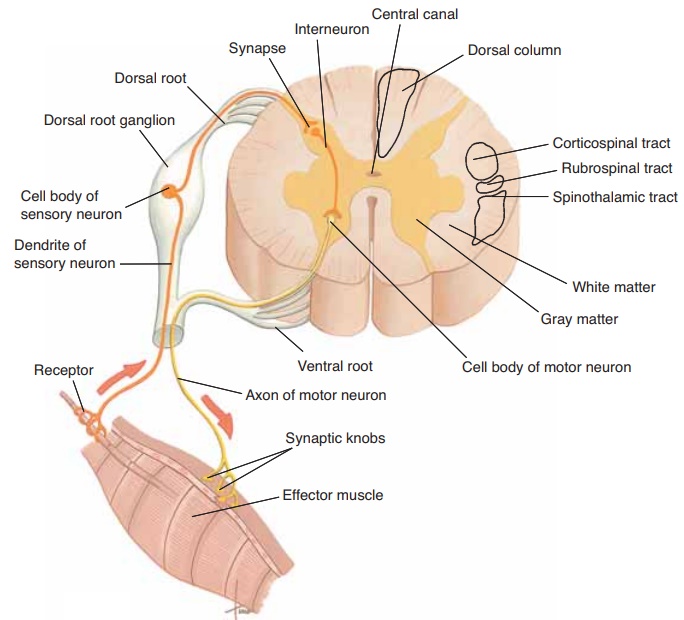 The spinal cord transmits impulses to and from the brain and is the integrating center for the spinal cord reflexes. Although this statement of functions is very brief and sounds very simple, the spinal cord is of great importance to the nervous system and to the body as a whole.

Enclosed within the vertebral canal and the meninges, the spinal cord is well protected from mechanical injury. In length, the spinal cord extends from the foramen magnum of the occipital bone to the disc between the first and second lumbar vertebrae. 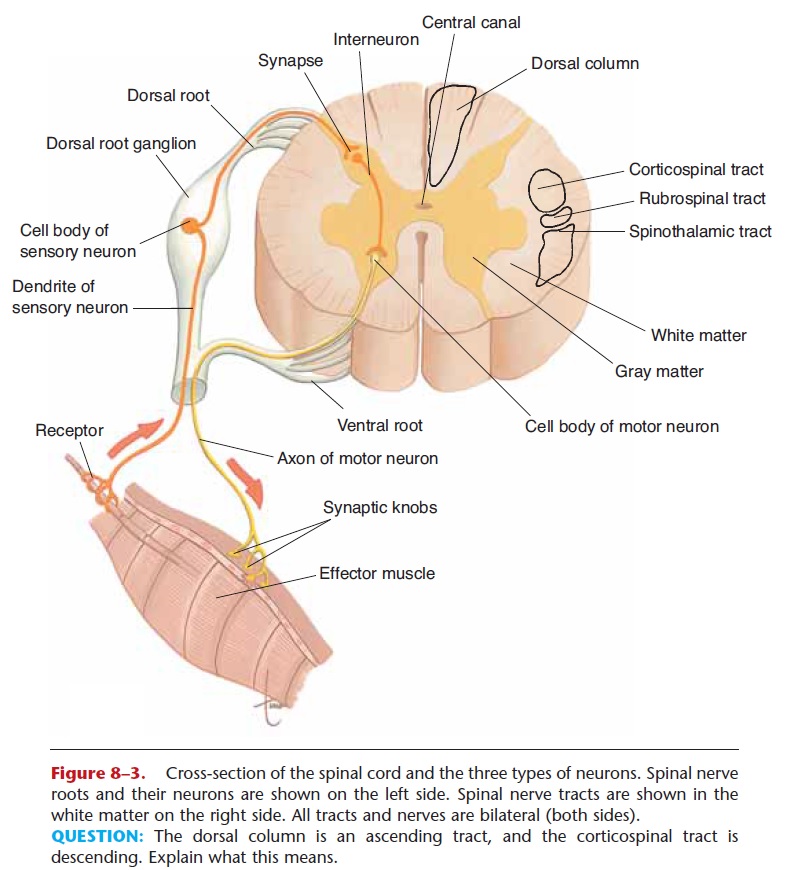 A cross-section of the spinal cord is shown in Fig. 8–3; refer to it as you read the following. The internal gray matter is shaped like the letter H; gray matter consists of the cell bodies of motor neurons and interneurons. The external white matter is made of myelinated axons and dendrites of interneurons. These nerve fibers are grouped into nerve tracts based on their functions. Ascending tracts (such as the dor-sal columns and spinothalamic tracts) carry sensory impulses to the brain. Descending tracts (such as the corticospinal and rubrospinal tracts) carry motor impulses away from the brain. Lastly, find the central canal; this containscerebrospinal fluid and is con-tinuous with cavities in the brain called ventricles.

There are 31 pairs of spinal nerves, those that emerge from the spinal cord. The nerves are named according to their respective vertebrae: 8 cervical pairs, 12 tho-racic pairs, 5 lumbar pairs, 5 sacral pairs, and 1 very small coccygeal pair. These are shown in Fig. 8–4; notice that each nerve is designated by a letter and a number. The 8th cervical nerve is C8, the 1st thoracic nerve is T1, and so on. 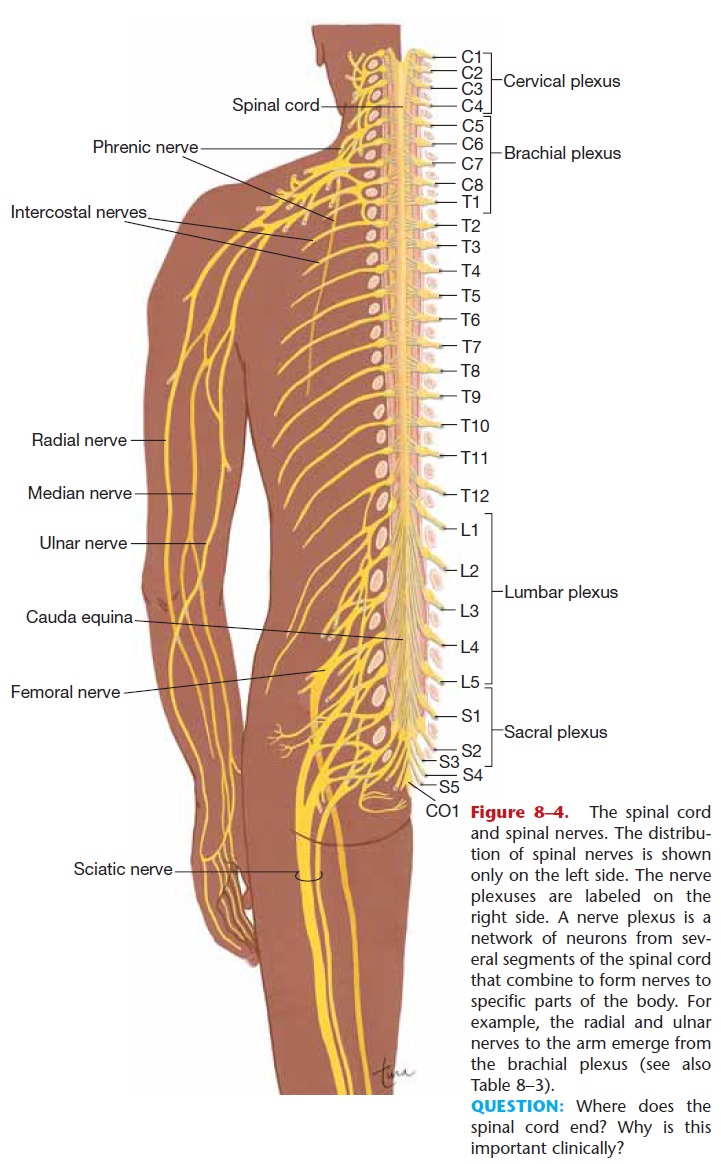 Figure 8–4. The spinal cord and spinal nerves. The distribu-tion of spinal nerves is shown only on the left side. The nerve plexuses are labeled on the right side. A nerve plexus is a network of neurons from sev-eral segments of the spinal cord that combine to form nerves to specific parts of the body. For example, the radial and ulnar nerves to the arm emerge from the brachial plexus (see also Table 8–3).

QUESTION: Where does the spinal cord end? Why is this important clinically?

In general, the cervical nerves supply the back of the head, neck, shoulders, arms, and diaphragm (the phrenic nerves). The first thoracic nerve also con-tributes to nerves in the arms. The remaining thoracic nerves supply the trunk of the body. The lumbar and sacral nerves supply the hips, pelvic cavity, and legs. Notice that the lumbar and sacral nerves hang below the end of the spinal cord (in order to reach their proper openings to exit from the vertebral canal); this is called the cauda equina, literally, the “horse’s tail.” Some of the important peripheral nerves and their destinations are listed in Table 8–3.

The ventral root is the motor root; it is made of the axons of motor neurons carrying impulses from the spinal cord to muscles or glands. The cell bodies of these motor neurons, as mentioned previously, are in the gray matter of the spinal cord. When the two nerve roots merge, the spinal nerve thus formed is a mixed nerve.

When you hear the term reflex, you may think of an action that “just happens,” and in part this is so. A reflex is an involuntary response to a stimulus, that is,  an automatic action stimulated by a specific change of some kind. Spinal cord reflexes are those that do not depend directly on the brain, although the brain may inhibit or enhance them. We do not have to think about these reflexes, which is very important, as you will see.