The autonomic nervous system (ANS) is actually part of the peripheral nervous system in that it consists of motor portions of some cranial and spinal nerves.

Making up the autonomic nervous system are vis-ceral motor neurons to smooth muscle, cardiac mus-cle, and glands. These are thevisceral effectors; muscle will either contract or relax, and glands will either increase or decrease their secretions.

The  ANS  has  two  divisions:  sympathetic  and parasympathetic. Often, they function in opposition to each other, as you will see. The activity of both divi-sions is integrated by the hypothalamus, which ensures that the visceral effectors will respond appro-priately to the situation. 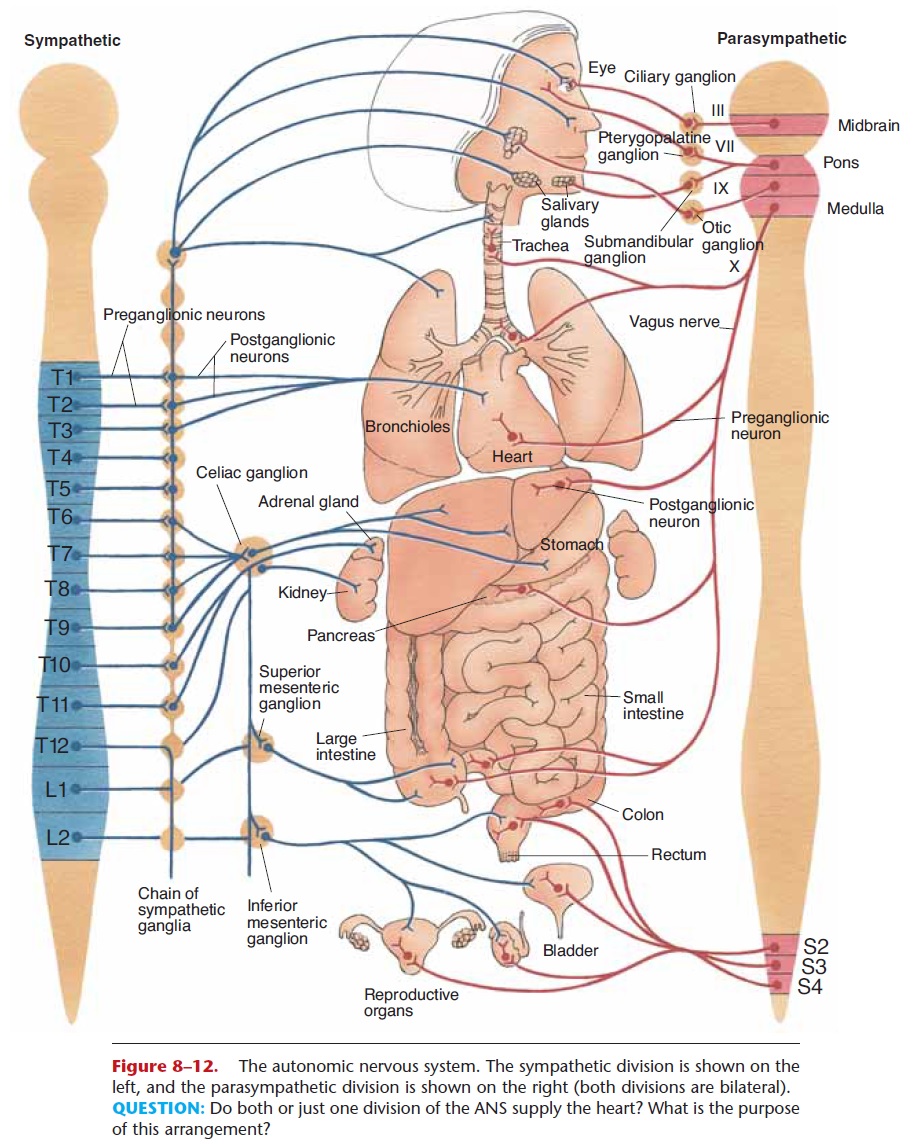 Another name for the sympathetic division is thora-columbar division, which tells us where the sympa-thetic preganglionic neurons originate.

The sympathetic division is dominant in stressful situations, which include anger, fear, or anxiety, as well as exercise. For our prehistoric ancestors, stress-ful situations often involved the need for intense phys-ical activity—the “fight or flight response.” Our nervous systems haven’t changed very much in 50,000 years, and if you look at Table 8–5, you will see the kinds of responses the sympathetic division stimulates. The heart rate increases, vasodilation in skeletal mus-cles supplies them with more oxygen, the bronchioles dilate to take in more air, and the liver changes glyco-gen to glucose to supply energy. At the same time, 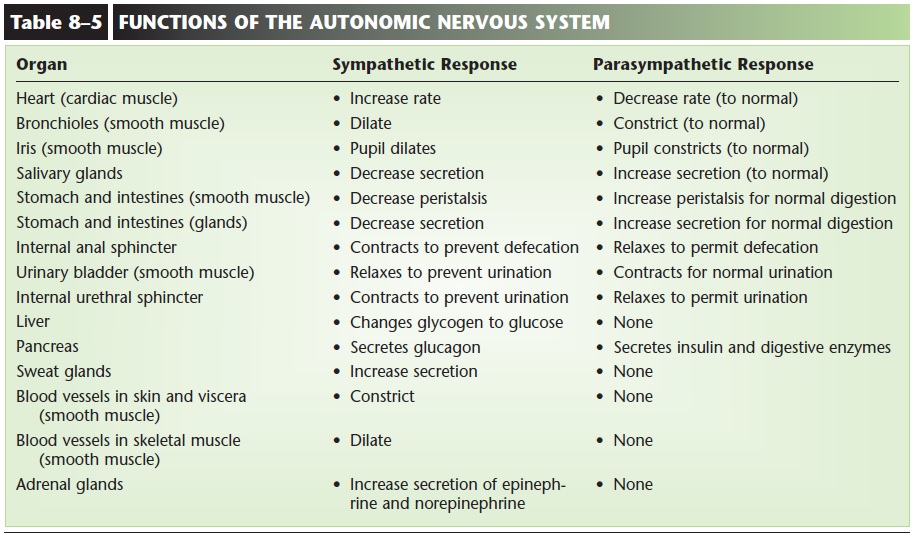 digestive secretions decrease and peristalsis slows; these are not important in a stress situation. Vasoconstriction in the skin and viscera shunts blood to more vital organs such as the heart, muscles, and brain. All of these responses enabled our ancestors to stay and fight or to get away from potential danger. Even though we may not always be in life-threatening situations during stress (such as figuring out our income taxes), our bodies are prepared for just that.

The other name for the parasympathetic division is the craniosacral division. The cell bodies of parasym-pathetic preganglionic neurons are in the brain stem and the sacral segments of the spinal cord. Their axons are in cranial nerve pairs 3, 7, 9, and 10 and in some sacral nerves and extend to the parasympathetic gan-glia. These ganglia are very close to or actually in the visceral effector (see Fig. 8–12), and contain the post-ganglionic cell bodies, with very short axons to the cells of the effector.

In the parasympathetic division, one preganglionic neuron synapses with just a few postganglionic neurons to only one effector. With this anatomic arrangement, very localized (one organ) responses are possible.

The parasympathetic division dominates in relaxed (non-stress) situations to promote normal functioning of several organ systems. Digestion will be efficient, with increased secretions and peristalsis; defecation and urination may occur; and the heart will beat at a normal resting rate. Other functions of this division are listed in Table 8–5.

Notice that when an organ receives both sympa-thetic and parasympathetic impulses, the responses are opposites. Such an arrangement makes maintaining an appropriate level of activity quite simple, as in chang-ing the heart rate to meet the needs of a situation. Notice also that some visceral effectors receive only sympathetic impulses. In such cases, the opposite response is brought about by a decrease in sympathetic impulses. Secretion by the sweat glands is an example.